Is This Our Congress Hard at Work?

A collage purportedly showing members of the US Congress sleeping at their desks actually shows various Brazilian politicians napping over the years. 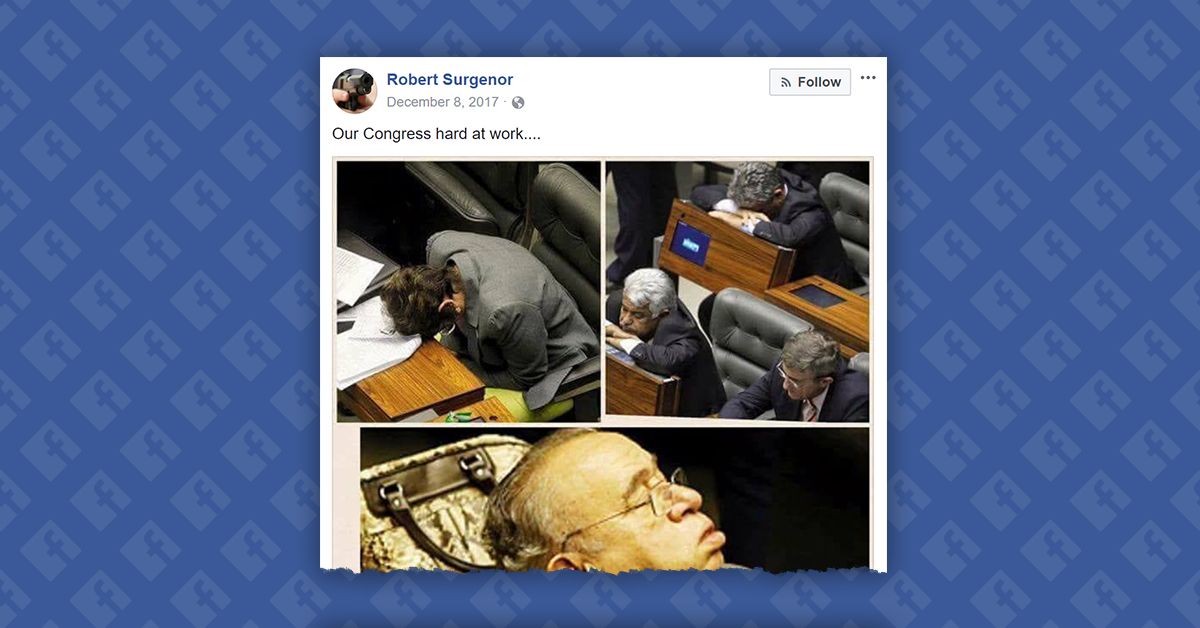 Claim:
An image collage shows various members of the United States Congress "hard at work" while sleeping at their desks.
Rating:

The photographs are real; These images were taken between 2010 and 2015 and show politicians in Brazil during marathon voting sessions or in extreme circumstances.

These images do not show members of the United States Congress.

Some of President Trump's ardent online fans have been circulating a collage of snapshots that shows politicians sleeping at their desks, accusing U.S. Congress of being lazy with the sarcastic remark "Our Congress hard at work."

The image was circulated by Twitter accounts such as "Agent Renee" (whose profile featured 4 American flags and a reference to President Trump's "Make America Great Again" slogan), LinkedIn pages for people such as "Veronica MAGA Montague" (which also displayed an unusual amount of flags and uses the president's slogan as a middle name), and Facebook profiles ostensibly from American-born users such as "Robert Surgenor," along with the claim that the images showed "Our Congress" hard at work: None of these images show members of the United States Congress—though they are real photos.

Before this image collage was circulated by "American" social media accounts claiming that it showed "our Congress hard at work," it was widely shared in Brazil where this collage has been circulating since at least 2015. It first went viral after it was reportedly posted to  Whatsapp by Brazilian singer Tom Kléber. According to John Cutrim's "Jornal Pequeno" the message was originally captioned "Êta povo que trabalha," or "working for the people."

We examined each of these five photographs to see if they truly showed Brazilian politicians sleeping on the job. And although these are all genuine photographs, we found that they showed isolated incidents that are not indicative of a poor work ethic in Brazil's parliament when viewed in the correct context. The images showed legislative leaders dealing with extreme circumstances over the span of several years.

To break down the images seen in the above collage, take the following photograph, which shows Deputy Domingos Dutra and peasant leader Manoel Conceicao during a hunger strike in 2010: Another image shows Deputy Heráclito Fortes dozing off during a session analyzing presidential vetoes which started on a Tuesday night in September 2015 and finished near dawn the following morning. A similar scenario is depicted in the following photograph which shows various MPs "surrendering to sleep" after 41 hours of debate in 2013:

This image was also taken during a marathon session in 2013: Another one of the "sleeping politician" images was also taken during an overnight vote and showed Brazilian politician Iriny Lopes dozing off in December 2014: The photographs included in this collage do not show politicians from the United States. Although these image truly do show Brazilian politicians momentarily napping on the job, these photographs were all taken in either extreme conditions (such as a hunger strike) or during marathon voting sessions.