A photograph shows a woman wearing a "bullet bra."

Mostly False
About this rating
Context

While "bullet bras" were a popular form of push-up bra in the 1950s, a viral image supposedly showing the perks of this under garment is doctored.

An image supposedly showing a woman wearing a “bullet bra” is frequently shared on social media: While bullet bras were real, the above-displayed image has been digitally manipulated to exaggerate this garment’s appearance.

This viral image was created from a 1957 photograph of actress Merry Anders while she was promoting her latest movie “No Time To Be Young.” Here’s a look at the original photograph (left) and the doctored image (right): And, yes, bullet bras were indeed a popular undergarment once.

The bullet bra, popularized by actresses like Lana Turner and Marilyn Monroe, was actually available from 1939, but World War II put plans on hold for widespread manufacture until the 1950s when its shape became much more extreme than that of the forties. The spiral stitching on it accentuated the pointiness of the cone shape. Padded versions or falsies, developed by Warner’s in the 1930s, were also popular, allowing women to go up a bust size. Maidenform was the first brand to reach the masses in the US with its now infamous “I dreamed…” advertising campaign which ran successfully for twenty years and showed lifestyle images of confident women in its bras who had beautiful homes, handsome husbands, exciting dream jobs and were overtly sexy. The ads, mainly featuring the Chansonette bullet bra, could be seen on billboards all over the US, often opposite the department stores that stocked them, and in full-page ads in Vogue and Vanity Fair.

Here’s one of Maidenform’s “I dreamed” advertisements from 1954: 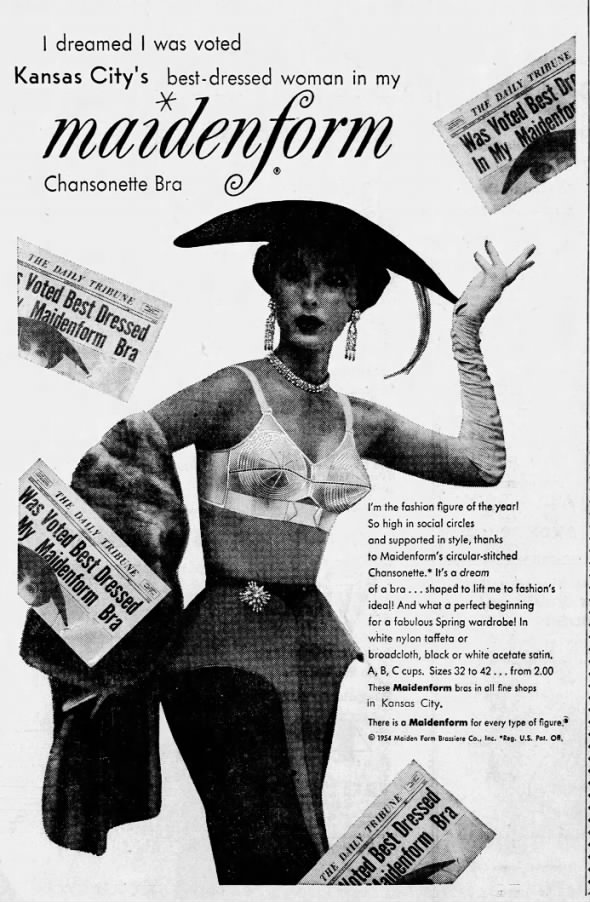