Is This 'Sky Hotel' Real? 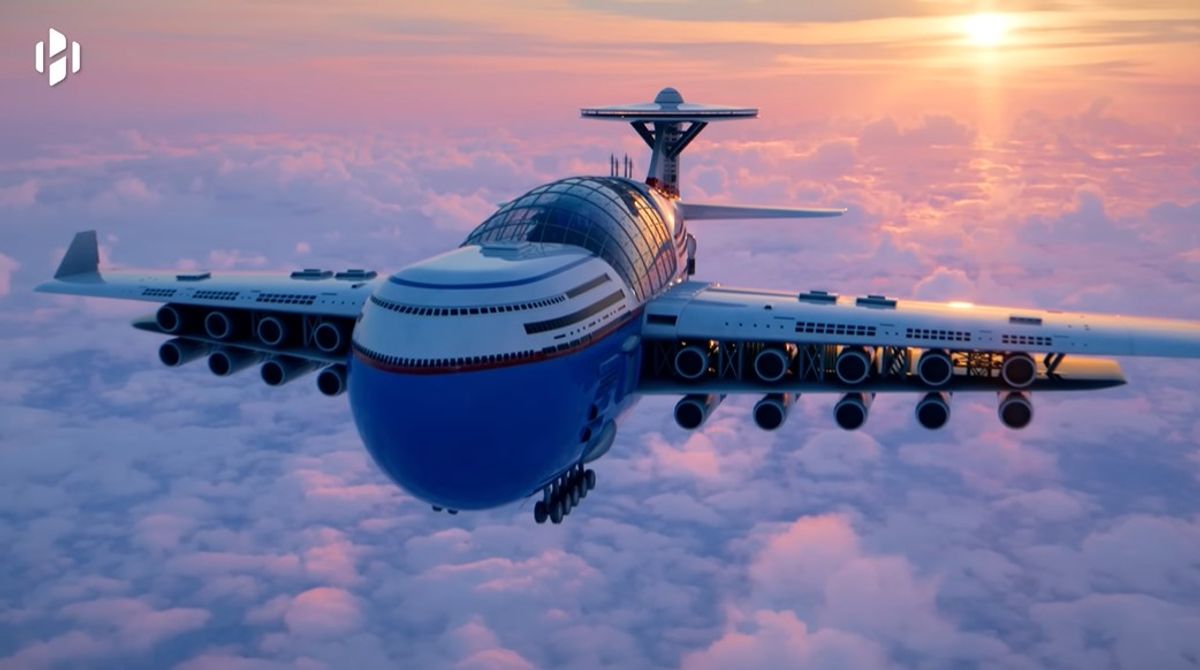 A video supposedly showing a nuclear-powered "sky hotel" called the "Sky Cruise" racked up millions of views after it was shared across social media in June 2022:

This is not a genuine video of a sky hotel. This is a computer rendering of a futuristic concept.

This video, which was viewed more than 3 million times on TikTok, was created by Hashem Al-Ghaili and was based on a concept image created by Tony Holmsten.

Al-Ghaili, who has referred to his sky hotel as the "flytanic," told Interesting Engineering that he was inspired to create this animation in part because of his current dismay with modern airplanes. Al-Ghaili said:

I believe the current flying experience has become tiresome and outdated. It is time for new innovations, that make our flight experiences more comfortable. I have always been a fan of Studio Ghibli. Castle in the Sky is one of my favorite movies where we see massive flying ships with people living inside."

While this video caused some confusion as line as some people wondered if there was truly a sky hotel flying overhead, this futuristic conceptual "sky hotel" does not currently exist. And, according to Popular Mechanics, it's unlikely that this airborne palace will exist in the future.

Is this outlandish “Skytanic” even in the realm of possibility?

There are some elephants in the room from the very start. We aren’t all that close to nuclear fusion energy even in enormous, dedicated facilities on the ground. The earliest estimates for net-positive fusion are in the 2030s, and it’s honestly not clear yet that it will happen. So that’s an enormous hurdle before anything like Sky Cruise could ever, well, take off. (No offense to Sky Cruise, either; nuclear fusion is used as the “X factor” in a lot of outlandish ideas because it’s been popularized as a form of so-called unlimited energy.)

While Al-Ghaili readily admits that there are no plans to actually build this futuristic concept, he does believe that one day it could exist. In a follow-up post on Facebook, Al-Ghaili wrote that he hoped his sky hotel video would encourage people to keep dreaming of futuristic possibilities.

I want to reiterate that it’s just a concept. I’m happy to see that it has stirred a lot of discussion and made you take a moment to dream of a future where such stuff could exist. Regardless of its feasibility, we humans should never stop dreaming ... I do believe that the Sky Cruise (Skytanic or Flytanic) could someday roam our skies.

Cosic, Milica, and The Sun. “Inside Giant Flying Luxury Hotel That Can Stay in the Air for Years.” New York Post, 27 June 2022, https://nypost.com/2022/06/27/inside-giant-flying-luxury-hotel-that-can-stay-in-the-air-for-years/.

“Inside the Nuclear-Powered ‘Flying Hotel’ That Can Stay Airborne for Months.” The Independent, 28 June 2022, https://www.independent.co.uk/travel/news-and-advice/sky-cruise-flying-hotel-ai-nuclear-b2110050.html.

Watch the Nuclear-Powered Flying Hotel That Can Stay Airborne for Years with 5,000 Passengers. 28 June 2022, https://interestingengineering.com/nuclear-powered-flying-hotel.