Irena Sendler, supposedly a candidate for the 2007 Nobel Peace Prize, is credited with saving 2,500 Polish Jews from the Holocaust. 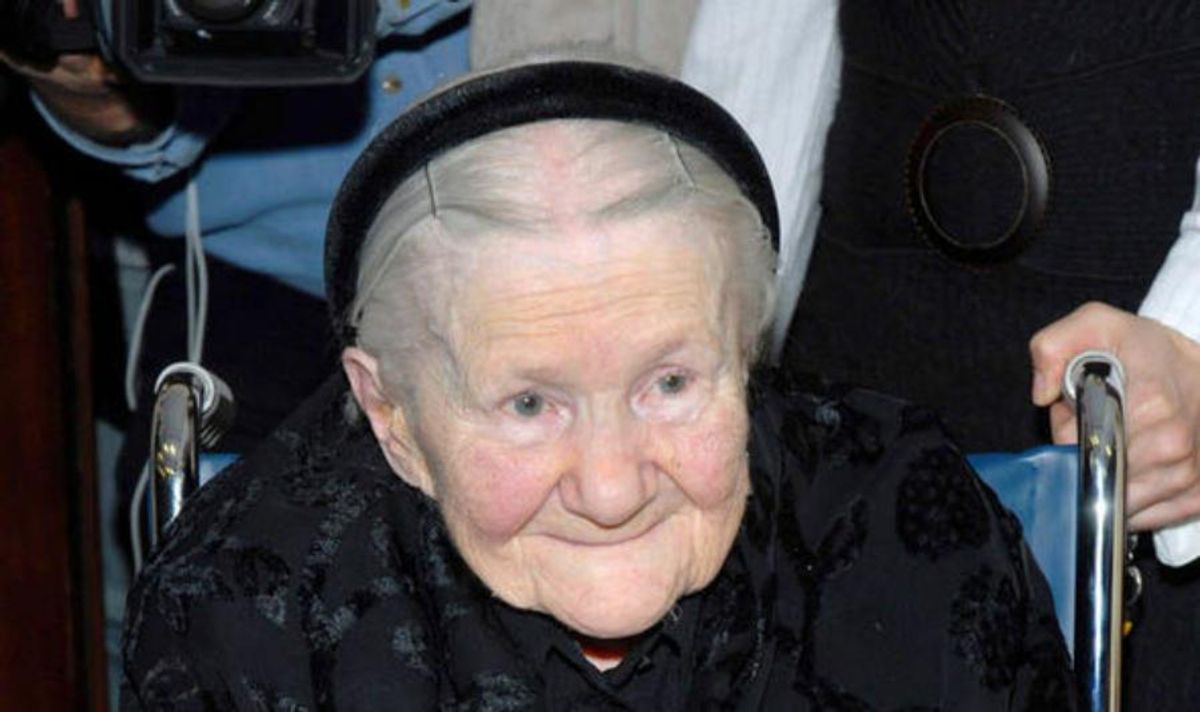 Claim:
Irena Sendler, credited with saving 2,500 Polish Jews from the Holocaust, was a candidate for the 2007 Nobel Peace Prize but lost out to Al Gore.
Rating:

On 12 May 2008, Irena Sendlerowa (commonly known as passed away of pneumonia at the age of 98 in Warsaw. Her death prompted the circulation of an online message aimed at informing the many people who remained unfamiliar with her heroic deeds during the Holocaust:

There recently was a death of a 98 year old lady named Irena.

During WWII, Iliana, got permission to work in the Warsaw Ghetto.

She had an ulterior motive...

She KNEW what the Nazi's plans were for the Jews.

Iliana smuggled infants out in the bottom of her tool box she carried, and she carried in the back of her truck a Burlap sack, (for larger kids).

She also had a dog in the back, that she trained to bark when the Nazi soldiers let her in, and out of the ghetto.

The soldiers of course wanted nothing to do with the dog, and the barking covered the kids/infants noises.

During her time and course of doing this, she managed to smuggle out and save 2500 kids/infants.

She was caught, and the Nazi's broke both her legs, and arms, and beat her severely.

Iliana kept a record of the names of all the kids she smuggled out, and kept them in a glass jar, buried under a tree in her back yard.

After the war, she tried to locate any parents that may have survived it, and reunited the family.

Most of course had been gassed.

Those kids she helped got placed into foster family homes, or adopted.

Last year Iliana was up for the Nobel Peace Prize....

Al Gore won, for a slide show on Global Warming.

Irena has often been referred to as "the female Oskar Schindler" in her native Poland for her daring and ingenuity in saving the lives of more than 2,500 Jews (most of them children) in German-occupied Poland during Unlike Oskar Schindler, whose story was the subject of the Academy Award-winning 1993 film Irena Sendler was a relatively unknown figure to the world at large until 1999, when four Kansas high school students wrote and performed "Life in a Jar," a play about Irena's life-saving efforts in the Warsaw Ghetto:

A Los Angeles Times obituary for Irena described how the Polish social worker passed herself off as a nurse to sneak supplies and aid into (and children out of) the Warsaw Ghetto, and the punishment she endured when she was finally caught by the Nazis:

She studied at Warsaw University and was a social worker in Warsaw when the German occupation of Poland began in 1939. In 1940, after the Nazis herded Jews into the ghetto and built a wall separating it from the rest of the city, disease, especially typhoid, ran rampant. Social workers were not allowed inside the ghetto, but Sendler, imagining "the horror of life behind the walls," obtained fake identification and passed herself off as a nurse, allowed to bring in food, clothes and medicine.

By 1942, when the deadly intentions of the Nazis had become clear, Sendler joined a Polish underground organization, Zegota. She recruited 10 close group that would eventually grow to 25, all but one of them began rescuing Jewish children.

She and her friends smuggled the children out in boxes, suitcases, sacks and coffins, sedating babies to quiet their cries. Some were spirited away through a network of basements and secret passages. Operations were timed to the second. One of Sendler's children told of waiting by a gate in darkness as a German soldier patrolled nearby. When the soldier passed, the boy counted to 30, then made a mad dash to the middle of the street, where a manhole cover opened and he was taken down into the sewers and eventually to safety.

Most of the children who left with Sendler's group were taken into Roman Catholic convents, orphanages and homes and given non-Jewish aliases. Sendler recorded their true names on thin rolls of paper in the hope that she could reunite them with their families later. She preserved the precious scraps in jars and buried them in a friend's garden.

In 1943, she was captured by the Nazis and tortured but refused to tell her captors who her were or where the bottles were buried. She also resisted in other ways. According to Felt, when Sendler worked in the prison laundry, she and her made holes in the German soldiers' underwear. When the officers discovered what they had done, they lined up all the women and shot every other one. It was just one of many close calls for Sendler.

During one particularly brutal torture session, her captors broke her feet and legs, and she passed out. When she awoke, a Gestapo officer told her he had accepted a bribe from her comrades in the resistance to help her escape. The officer added her name to a list of executed prisoners. Sendler went into hiding but continued her rescue efforts.

Felt said that Sendler had begun her rescue operation before she joined the organized resistance and helped a number of adults escape, including the man she later married. "We think she saved about before she joined Zegota," Felt said, which would mean that Sendler ultimately helped rescue about 3,000 Polish Jews.

When the war ended, Sendler unearthed the jars and began trying to return the children to their families. For the vast majority, there was no family left. Many of the children were adopted by Polish families; others were sent to Israel.

Irena Sendler is often claimed to have been a candidate to receive the 2007 Nobel Peace Prize, but that honor was not awarded to her. It's not possible to state categorically that she was "nominated" for the award, since information about "nominations, investigations, and opinions is kept secret for fifty years." (Since 1974 the statutes of the Nobel Foundation have stated that "work produced by a person since deceased shall not be considered for an award," so she presumably could not be subsequently honored.)

In 2007, the Nobel Peace Prize was awarded jointly to the Intergovernmental Panel on Climate Change and former Albert Arnold (Al) "for their efforts to build up and disseminate greater knowledge about man-made climate change, and to lay the foundations for the measures that are needed to counteract such change." (Al Gore was also involved with another significant award in 2007, when An Inconvenient Truth, a documentary about his campaign to make the issue of global warming a recognized problem worldwide, claimed an Academy Award as "Best Documentary Feature.")

The International Federation of Social Workers (IFSW) expressed its disappointment that Irena Sendler had not yet been honored with a Nobel Prize:

IFSW sends congratulations to Al Gore and the Intergovernmental Panel on Climate Change (IPCC) on winning the Nobel Peace Prize 2007. The issue of climate change is affecting all individuals and societies and it is a more than worthy cause to help begin the change in our lifestyle to prevent destruction of our planet. Social workers know from daily experience that this is an immediate and pressing social and personal issue.

'However IFSW is deeply saddened that the life work of Nobel nominee Irena Sendler, social worker, did not receive formal recognition', said Jones, IFSW President. 'Irena Sendler and her helpers took personal risks day after day to prevent the destruction of individual lives of the children of the Warsaw ghetto. This work was done very quietly, without many words and at the risk of their lives. This is so typical of social work, an activity which changes and saves lives but is done out of the glare of publicity and often at personal risk. IFSW recognises her again and at the same time celebrates the commitment and dedication of thousands of social workers around the world who also bring hope and care to people often living on the edge of despair.'