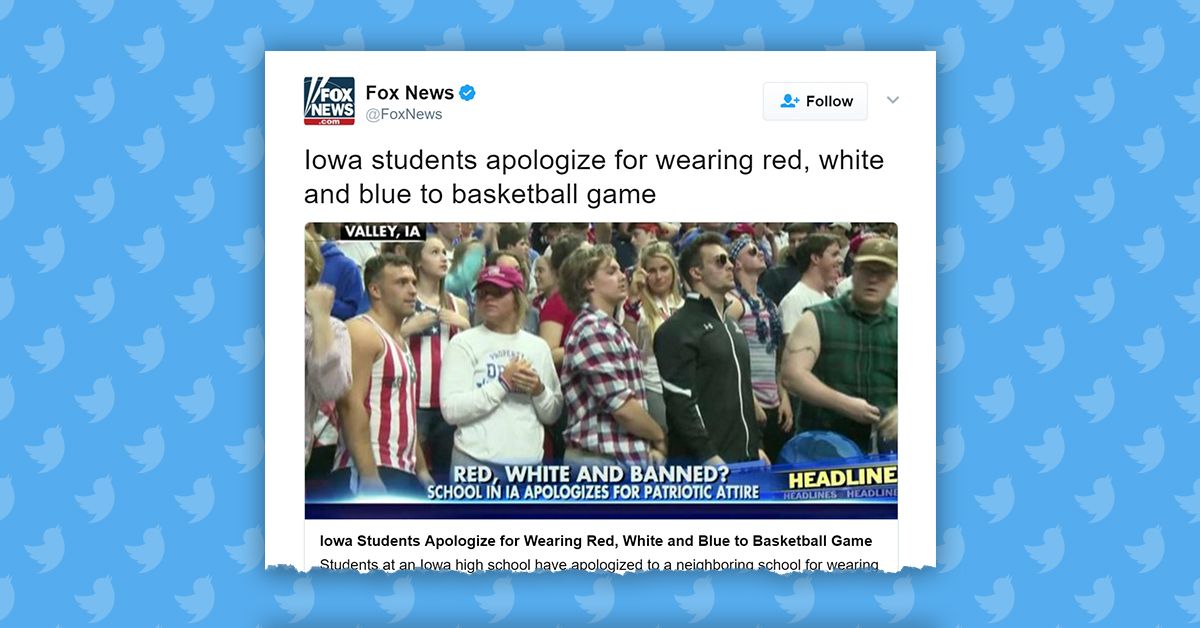 Claim:
Iowa high school students were forced to apologize for wearing red, white, and blue at a sports game because immigrant students on the opposing team were offended.
Rating:

Students at Valley High School issued an apology to North High School of over tense interactions that occurred during a school basketball game.

The students opted to issue an apology without being forced or asked to do so, and many attendees said the shouting of racial slurs (and not the wearing of patriotic colors) was what fueled the dispute.

In early March 2017, a social media controversy erupted over a claim that Valley High School students in Iowa were allegedly "berated" and "forced to apologize" to students of Des Moines' North High School for wearing red, white, and blue garb to an 8 March 2017 school basketball game, an act that purportedly offended a number of "refugees" on the opposing team:

Iowa HS students berated and forced to apologize for wearing red, white, and blue to a basketball game.

You can't make this stuff up.

A 13 March 2017 blog post asserted the students in question "apologized for their patriotism" in "wearing USA-themed clothing" to the game that was deemed "offensive" by rival players:

The Valley High School students attire was deemed offensive to the rival schools’ players, as some of their families are refugees.

“Any normal person, any educated person can look at that and think what the hell are these kids thinking,” said Morgan Wheat, assistant coach of the Des Moines North team.

The Valley High students argued that wearing red, white and blue was not an attempt to taunt the Des Moines North players.

In a statement, student leaders at Valley High School apologized for their patriotism ... Unfortunately, having pride in your country is frowned upon by the left in today’s society. Stories like these have popped up more often than they should. It’s about time we stand up to these refugees and immigrants. If you want to come to America, you should adopt our values — including the red, white and blue.

The claims played on the common narrative that refugees who come to the U.S. share no love for America, and that they regularly express "offense" and contempt for expressions of American culture and history, but even local news coverage of the controversy didn't seem to support that common narrative.

News accounts primarily jumped from discussing red, white, and blue clothing to the issuance of a "hand delivered" apology from Valley High students, without supplying any details about who was offended or the specific nature of the purported offense:

Following the [game], some fans were more concerned with what was happening in the crowd. [Des Moines North Coach Morgan] Wheat said, "Everything just blows up after the game and I'm still hearing about it this morning."

Valley students had chosen to wear red, white and blue instead of their school colors black and orange. "Any normal person, any educated person can look at that and think what the hell are these kids thinking," said Wheat.

The Polars team is filled with players who come from refugee families and fans took to social media wondering the same thing. "Kids are kids, I get it, but I do have questions. I want to know why."

An apology posted to Valley's Facebook page by the school's Student Council leadership reinforced the notion that Valley High students' sole "offense" had been the wearing of "U.S.A. apparel":

The following statement was written by our student council leadership and hand delivered to North High School today.

To the Students and Staff of North High School:

It has been brought to our attention that the decision by the Valley High School student section to wear U.S.A. apparel at our game last night was offensive to members of your community and fan base. We are deeply sorry if we have offended anyone in any way. We have traditionally dressed in such a fashion for great games such as the one last night. Everyone here at Valley has immense respect not only for your team and players but for your community as a whole. Please know that our intent was in no way to offend or demean—just to support our own team in a way we have done before.

Congratulations on a wonderful season and we wish you nothing but the best of luck in the future.

But an unrelated post on the Facebook page of North High School was rapidly besieged by out-of-state commenters who had read claims the rival team was "forced to apologize" for wearing patriotic colors, while self-identified locals asserted the apology was about the behavior of Valley High students who chanted "deport them" during the event:

Commenters asserted that "racial slurs" shouted by Valley High students (not their "USA clothing") was what prompted the apology, which was neither demanded nor requested by North High students:

Some of those commenters linked to a September 2016 Des Moines Register article about racial tensions in the school district:

A culture of "deep racial disparities" exists at Valley High School, creating an inequitable, toxic environment for students of color, according to a report from Iowa State University researchers.

"The traditions, curriculum, and common teaching methods within the school assume students' upper class whiteness as the norm or archetype, which can marginalize and demoralize students of color whether intended or not," researchers wrote.

The report comes more than a year after violent confrontations between students prompted a series of community discussions on race relations at the school ... Four researchers from ISU were brought in last October to analyze data and statistics from the district, hold focus groups with students and staff, and observe student interactions. Their work resulted in a 60-page report.

Superintendent Lisa Remy called the results of the audit "troubling and unacceptable," but she said the information will be valuable in creating an action plan to address racial inequity. The West Des Moines school board discussed the plan [subsequently].

That same newspaper reported North High coach Chad Ryan had acknowledged rumors that racial slurs and not patriotic attire were the cause of the dispute, but he declined to confirm whether any such slurs had actually been shouted during the game:

Ryan said North's basketball team is diverse and if people did make racist comments towards the school's students, "that's obviously not good."

However, he said North's diversity is one of the strongest things about the school, and he's proud of it.

"It’s been good for us, as a school," Ryan said. "They learn from each other about people with different cultures and backgrounds — and we try to use it as an educational piece."

Ryan said he would not comment on the allegations on social media that some Valley students said racial slurs to North students.

Our requests for comment from school officials have not yet been responded to.