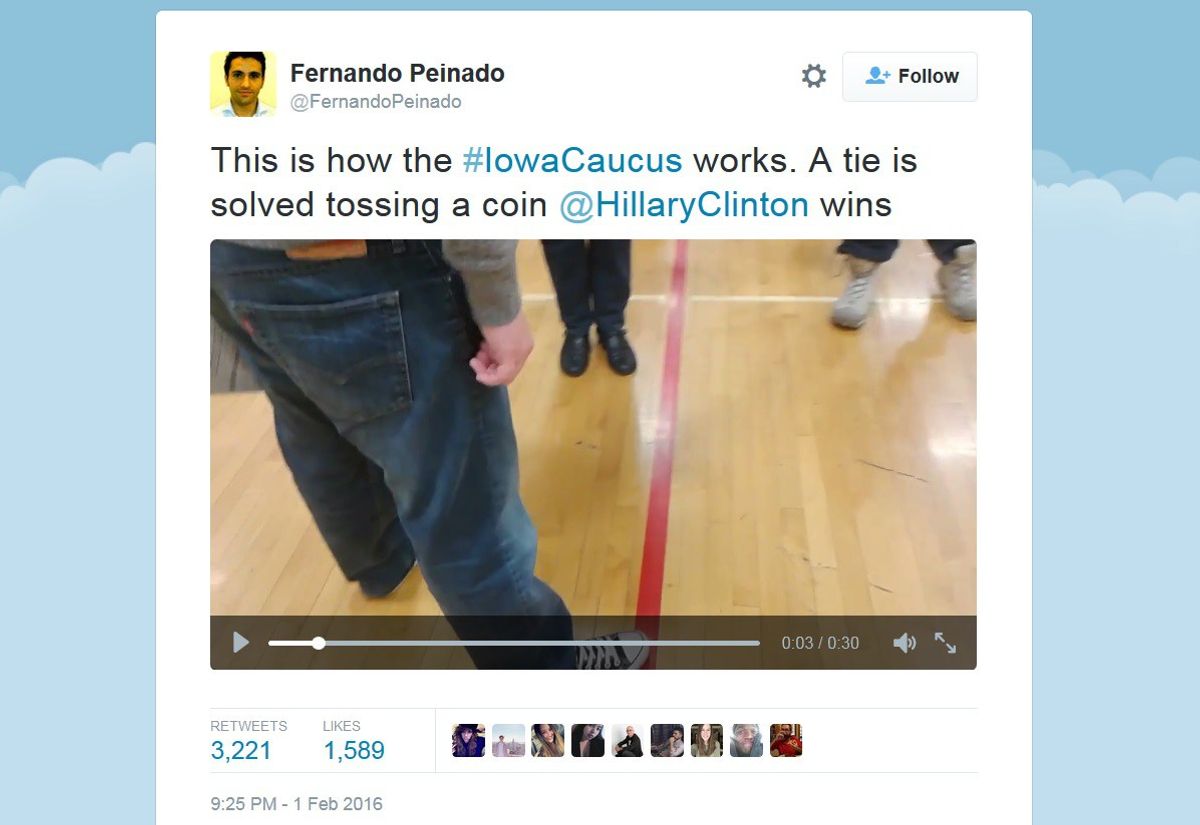 Claim:
During the Iowa caucuses, delegates are sometimes awarded through coin tosses, and Hillary Clinton won six coin tosses in the 2016 caucuses (awarding her a narrow victory).
Rating:

Under rare conditions, Iowa caucus rules call for a coin toss to determine to which candidate delegates are awarded.

Whether Hillary Clinton won six out of six (or seven) coin tosses in Iowa in 2016; how many coin tosses occurred; the specific breakdown of coin toss results.

On 1 February 2016, the state of Iowa held the caucuses heralded as marking the public start of the presidential nomination cycle.  While the caucus results were well-covered in the news media, a number of "coin toss" decisions between Democratic candidates Hillary Clinton and Bernie Sanders generated a large amount of interest in the state's unique political proceedings.

We received a number of e-mails from readers questioning whether it was true that Iowa caucus results sometimes hinge on a coin toss. A 25 December 2007 NPR article similarly essayed a number of Iowa's unusual caucus practices, among which was the circumstance of a coin toss decision, an aspect also mentioned in a 2008 New York Times article:

While the Republican caucuses are fairly simple — voters can leave shortly after they declare their preferences — Democratic caucuses can require more time and multiple candidate preferences from participants. They do not conform to the one-person, one-vote rule, because votes are weighted according to a precinct's past level of participation. Ties can be settled by coin toss or picking names out of a hat.

A 4 January 2016 Huffington Post article also described a "unique — and bizarre — political spectacle" in Iowa during primary season, nothing that under "extremely rare" circumstances a coin toss could determine to which candidate delegates are assigned:

It's Extremely Rare, But Caucusgoers Could Resort to a Coin Toss in the Democratic Caucus Process

There are a number of specific instances in which this would happen, which is very dependent on the size of the county and the preferences of the group. If two candidates are tied for a single delegate, a coin toss will determine who gets him or her. If two preference groups are tied for last place, they have to flip a coin to decide which group has to realign.

Prior to this,  the "coin flip" provision of Iowa's caucuses was rarely discussed and not considered an integral aspect of the political event. But late on 1 February 2016, caucus results indicated what many described as a "dead heat" or "virtual tie" between Democrat contenders Hillary Clinton and Bernie Sanders. Subsequently, reports suggested that Clinton had won six out of six (or six out of seven) reported coin tosses, a supposed statistical improbability by which she managed a narrow victory over Sanders:

It happened Monday night in at least a handful of Iowa precincts where Clinton and Sen. Bernie Sanders (Vt.), now locked in what Sanders called a "virtual tie" in the state, fought to a deadlock. And, in at least six of those precincts, Clinton won spare delegates, based on reporting from the Des Moines Register and video posted to social media.

On 2 February 2016, the Des Moines Register reported that of six known coin tosses that had taken place the night before, Clinton "won the toss" in all of them:

Unable to account for [a] numerical discrepancy and the orphan delegate it produced, the Sanders campaign challenged the results and precinct leaders called a Democratic Party hot line set up to advise on such situations.

Party officials recommended they settle the dispute with a coin toss.

A Clinton supporter correctly called "heads" on a quarter flipped in the air, and Clinton received a fifth delegate.

Hillary Clinton got lucky Monday night in Iowa. Literally ... But in seven of the state's 1,681 precincts, the results were so close that individual delegates were awarded by a coin flip. (That was actually in the rules given to precinct chairmen, according to this photo tweeted by Univision's Fernando Peinado.) And improbably, Clinton's campaign won six of the seven coin flips currently reported to have taken place across the state. Those aren't exactly Powerball odds, but still pretty lucky. Those delegates awarded by coin flip don't translate directly into actual delegates seated at the Democratic convention this summer in Philadelphia, but they would have factored into the proportional allocation formula that the party uses to determine how many delegates each candidate gets. (Sanders won the coin toss in Sioux City's 13th precinct, according to  Pat Gill, the county's commissioner of elections who provided the coin.)

On the afternoon of 2 February 2016, however, that article was updated with conflicting information suggesting that Sanders (not Clinton) had won an unexpectedly large proportion of coin tosses:

Sam Lau, a spokesman for the Iowa Democratic Party, pushed back on reports that Clinton won six of seven coin flips that were used to determine the allocation of delegates in what officials said was the closest election in the history of the caucuses. Because of the complicated formula Democrats employ to apportion their delegates, games of chance are used to break ties caused by rounding. The state party doesn't track all of the coin flips, but following anecdotal reports of Clinton's improbable luck on Monday night, Lau disclosed that it was Sanders who fared better in the games of chance that were reported through the party's official mobile app. The Vermont senator won six of those seven coin flips —a fact that underlines how incomplete the available data remains, and the likelihood that a full accounting of all the coin flips on Monday night would yield a more even result than initial reports suggested.

As of 2 February 2016, we were unable to locate any information supporting that app-gleaned data supported either claim: that Sanders won nearly all the coin tosses, or that Clinton was almost entirely favored by the random flips. In a separate  statement posted by Lau and attributed to Iowa Democratic Party (IDP) chair Andy McGuire, the IDP didn't address the coin tosses in their discussion of the "historically" tight caucus outcomes:

A number of media and social media accounts indicated that approximately six (or seven) coins were flipped during the Iowa caucuses in 2016. Clinton was reported as the winner of at least six tosses by outlets such as the local Des Moines Register, and social media users similarly reported outcomes favoring Clinton. The IDP's Sam Lau stated the opposite, claiming Sanders (not Clinton) won most coin flips.

The Des Moines Register published an article on the afternoon of 2 February 2016 stating that, due to reporting procedures, the actual number of coin flips that took place (and which side won them) was an unknown; the only seeming certainty was that at least seven coin flips took place

In an unknown number of Iowa Democratic caucus precincts Monday, a county delegate was awarded after the flip of a coin.

Why is the number unknown? Because officials who reported county delegate totals without using the party's smartphone app weren't required to signify if the win was the result of a coin toss, said Sam Lau, a spokesman for the Iowa Democratic Party.

A Des Moines Register editorial subsequently called for an audit of the caucus results, to include the providing of "a list of each precinct coin flip and its outcome":

The Iowa Democratic Party must act quickly to assure the accuracy of the caucus results, beyond a shadow of a doubt.

First of all, the results were too close not to do a complete audit of results. Two-tenths of 1 percent separated Bernie Sanders and Hillary Clinton. A caucus should not be confused with an election, but it's worth noting that much larger margins trigger automatic recounts in other states.

Second, too many questions have been raised. Too many accounts have arisen of inconsistent counts, untrained and overwhelmed volunteers, confused voters, cramped precinct locations, a lack of voter registration forms and other problems. Too many of us, including members of the Register editorial board who were observing caucuses, saw opportunities for error amid [the] chaos.

So her path forward is clear: Work with all the campaigns to audit results. Break silly party tradition and release the raw vote totals. Provide a list of each precinct coin flip and its outcome, as well as other information sought by the Register. Be transparent.

And then call for a blue ribbon commission to study how to improve the caucuses, as the Republican Party of Iowa did after its own fiasco in 2012. Monday's mess showed that it’s time for the Democrats to change, too.