Did Acid or Electricity Cause This Man to Vaporize?

The origins of this video show a disappearing man are uncertain, but the explanations provided for it are scientifically unworkable. 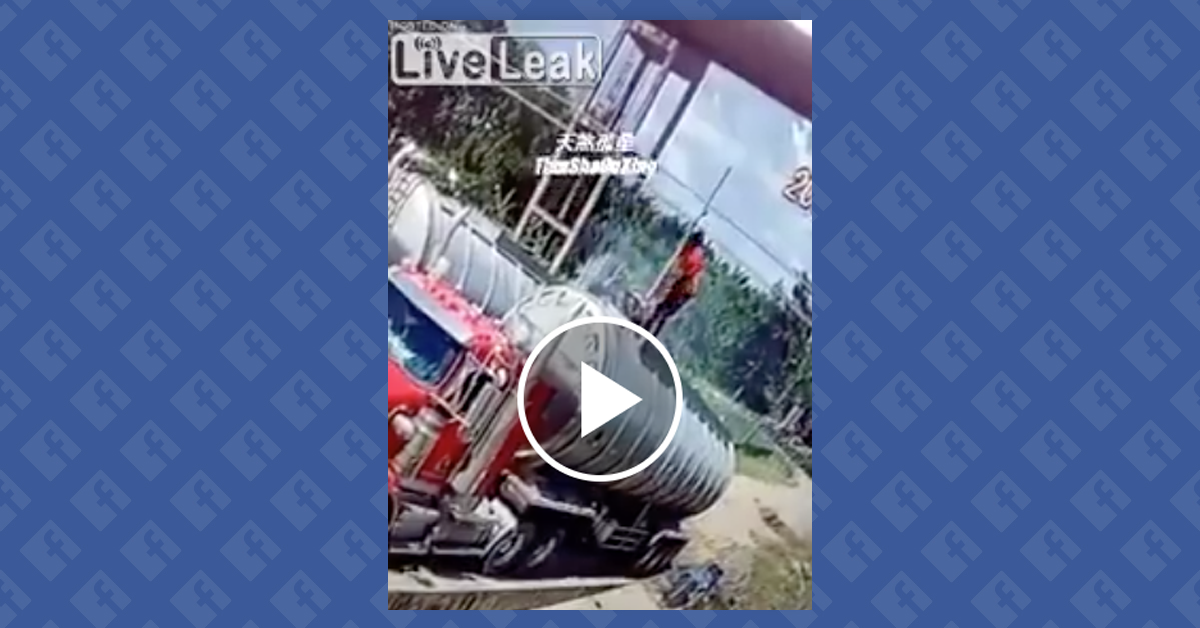 Claim:
A video shows a man vaporized instantly from electrocution and/or exposure to hydrofluoric or “sulfuric hydrofluoric" acid.
Rating:

Since at least October 2018, the video of a man perched atop a tanker truck ostensibly being electrocuted by an overhead powerline before apparently disappearing into thin air has been shared with multiple explanations of dubious credibility. Some videos, such as one published on LiveLeak, described the incident simply as “man gets electric shock on top of a tanker truck.” More recent iterations, including a viral claim on WhatsApp, suggested a mechanism involving either hydrofluoric acid or “Sulfuric Hydrofluoric acid" and appeared to suffer from myriad translation problems: "Sulfuric Hydrofluoric acid. Evaporating fumes dissolves any living organism in vapor. ... Within seconds he get mixed in the air."

Using back-of-the-envelope calculations based on the amount of water and other common constituents of the human body, researchers have estimated it would take 2.99GJ of energy to vaporize a human being. For a power cable to transfer that amount of energy to a human in less than a second, it would require that cable to be carrying a massively unrealistic voltage.

Using a (generous) half a second guess for the amount of time 2.99 GJ of energy would have been transferred to the human in this video, and a ballpark estimate of 1000 ohms of resistance in a human body, that power line would have to carry at least 2.5 million volts for human vaporization. The highest voltage power lines in existence (which look nothing like the ones in the viral video) carry at most one million volts of energy. We don’t know what happened to the man in this video, but he did not vaporize as a result of contact with that power line.

Hydrofluoric acid has a well-earned reputation as a deadly acid, but its deadly nature does not stem from its strength as an acid (it is actually considered a weak acid), but rather its ability to penetrate through tissue. As a result, hydrofluoric acid can be deadly via a number of mechanisms, but these mechanisms take much longer than a half a second to be fatal, and none of them could plausibly result in the wholesale vaporization of a man.

Though the extent of an injury from exposure to hydrofluoric acid depends on the amount, time, and route of exposure, its ability to permeate tissue can cause widespread internal cellular damage and, according to the CDC, “even small splashes of high-concentration hydrogen fluoride products on the skin can be fatal.” Despite that fact, effects from skin exposure would usually take 12-24 hours to first show up. The video shows a man exposed to a cloud of vapor, and inhalation of hydrofluoric acid vapors would cause much quicker irritation to the lungs as well as chronic damage over time, but it would in no way evaporate a man.

This video has been shared and re-shared several times on multiple explicit “shock” websites. It is also grainy, out of focus, and of highly uncertain provenance. It is likely that the video was edited, but of this we are certain: hydrofluoric acid, fluorosulfuric acid, and/or old-school electrocution did not cause a man to disappear into thin air.

National Institute for Occupational Safety and Health.   "Worker Deaths by Electrocution"     May 1998.