No, Indian Hindus Did Not Angrily Throw Away Idols Amid COVID-19

While India suffered a devastating surge in COVID-19 infections and deaths in 2021, some saw an opportunity for insidious religious propaganda. 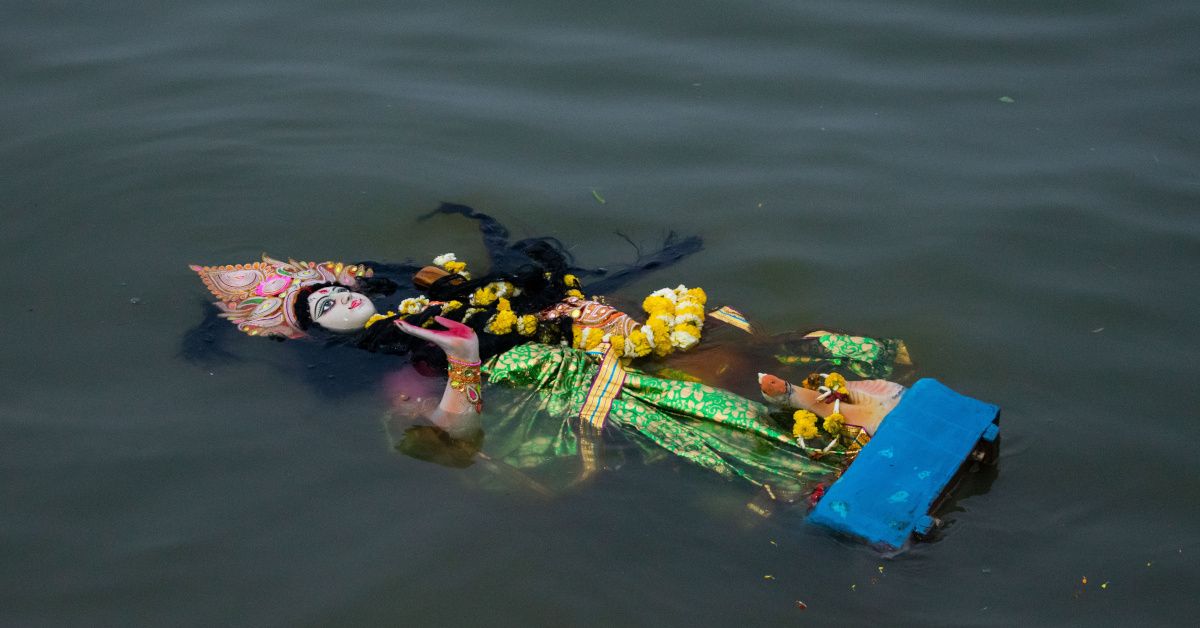 Claim:
In 2021, Hindus in India threw away religious idols en masse, in anger and despair at a surge in COVID-19 infections and deaths.
Rating:

In May 2021, Snopes received multiple inquiries from readers asking us to examine the accuracy and authenticity of a widely-shared video which claimed that Hindus in India had been throwing away the idols of their faith, in a gesture of anger and despair at their supposed failure to protect them from a devastating surge in COVID-19 infections and fatalities, in the spring of 2021.

The video consisted of a one-minute news segment read in a studio by an anchor speaking English and bore the chyron "Idols thrown on the street." In the top-right corner of the screen the words "Imam Hussein" could be seen, while the bottom-left corner read "Shia Waves: Shia World News." The segment contained two pieces of footage: an excavator clearing piles of idols, and idols being thrown from the back of a flat-bed truck into a body of water.

The text of the segment was as follows:

A large number of Indians have thrown the idols of the gods they worship on the streets, as the numbers of coronavirus infections and deaths skyrocket in the country. Indians expressed their anger at the idols that they worshipped and sacrificed themselves for, while the idols did not protect them from the coronavirus. They pray to the idols because they believe that it could save them from the virus, but they finally discovered that they could not do anything, and hence they destroyed it [sic]... Readers also asked Snopes about an article on the website ShiaWaves.com, which contained the same set of claims as the video.

The video and accompanying article were no more than insidious anti-Hindu propaganda; and the two pieces of footage the video relied upon were wrenched from their original context, which dated to before the COVID-19 pandemic and had no connection with it. We are issuing a rating of "False."

In recent years, misinformation -- primarily driven by online social networks and WhatsApp -- has been rife in India. The arrival of the COVID-19 pandemic in 2020 combined with existing religious and class-based divisions to create a maelstrom of inflammatory conspiracy theories and rumors, many of them targeting India's large Muslim minority.

The widely-shared video appears to have first emerged online in May 2021 and was broadcast on Imam Hussein TV, a multinational television network which supports the Iraqi-Iranian Shia Muslim cleric Sadiq al-Shirazi. Imam Hussein TV, the website ShiaWaves.com, and the television station Shia Waves, are all owned and operated by the Imam Hussein Media Group. Imam Hussein TV broadcasts in the United States, among many other countries, via mobile apps and OTT (over-the-top) devices such as the Roku player.

We could find no record of the "idols" segment on any of the Shia Waves or Imam Hussein TV social media accounts, which suggests it has either been deleted, or it was recorded from a live online stream by a third party, and subsequently re-uploaded to social media. The text of the segment read out in the video is identical to the text of the article published on ShiaWaves.com, which we know to be formally affiliated with Imam Hussein TV. Therefore, little doubt exists as to the authenticity of the video segment, and the authorship of Imam Hussein TV.

As originally reported by the Indian fact-checking website BOOM Live, the first piece of footage shown in the segment actually originated at least six months before the COVID-19 pandemic, and its narrative framing by Imam Hussein TV/Shia Waves was therefore inaccurate and grossly misleading.

In August 2019, Vijay Nehra, then a prominent municipal official in the city of Ahmedabad, in the north-western Indian province of Gujarat, tweeted out photographs of the aftermath of a festival in honor of the Hindu goddess Dashama. The pictures showed idols strewn along the banks of the Sabarmati river, of which Nehra remarked approvingly: "Instead of immersing Dashama idols in the river, they have respectfully left them on the banks!! Thousands and Thousands of them. Unbelievable change." At the conclusion of multi-day festivals honoring various Hindu deities, it is customary to immerse idols in water before disposing of them. Historically, this has been done by immersing the idols in rivers and lakes, but in recent years, concerns over water pollution have prompted efforts to discourage the practice, and find alternative ways to honor the immersion ritual.

In response to Nehra's tweet, Sagar Savaliya, a journalist in the state of Gujarat, posted a video that appeared to show an excavator disposing of idols that had been left by the banks of a river — the same footage later contained in the viral Imam Hussein TV/Shia Waves video:

It's not clear exactly when and where Savaliya's video was recorded, but the fact that it was posted in August 2019 means it could not possibly have any connection with the subsequent COVID-19 pandemic, and therefore does not illustrate what Imam Hussein TV/Shia Waves claimed. Far from showing Hindus in the act of abandoning or rejecting their faith, it almost certainly shows the aftermath of a festival of devotion to a Hindu deity.

The second piece of footage used in the May 2021 video was potentially even older than the first, and also bore no relation to the COVID-19 pandemic. As originally reported by Agence France-Presse in May 2020, the footage actually showed idols being tipped from the back of a truck into the Krishna river in the state of Telangana in 2015, as part of the immersion ceremony at the conclusion of a festival in honor of the Hindu god Ganesh.

The footage used by Imam Hussein TV/Shia Waves was posted to Facebook as early as September 2015, as shown in the comparison below: Once again, the footage could not possibly have had any connection to the COVID-19 pandemic, and showed the ritual of immersion being followed after a festival in honor of a Hindu god, rather than being an illustration of Indian Hindus abandoning their faith en masse.

The ShiaWaves.com article that accompanied the television segment also contained a photograph that was presented as evidence of the same supposed large-scale abandonment of religious faith by Hindus in India: Although we have not yet been able to pinpoint the exact origins of that particular photograph, it almost certainly shows the ritual of immersion at the culmination of a festival in honor of the goddess Durga.

Finally, it's worth noting that although the May 2021 video and article constituted anti-Hindu propaganda created by a Shia Muslim media network, they were also shared enthusiastically by some Christians, who appeared to revel in the (fictional) mass abandonment of faith among India's Hindus.