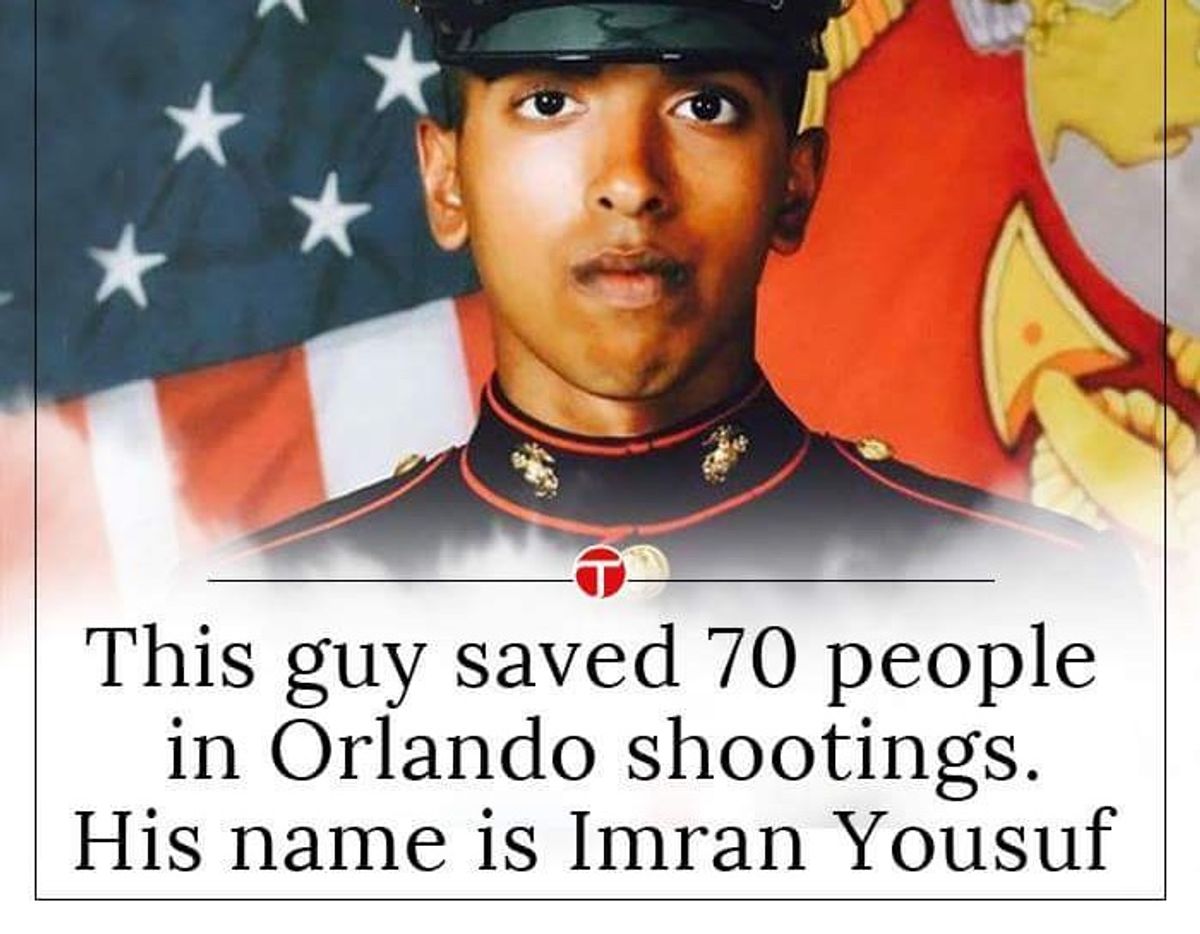 Former Marine Imran Yousuf is credited with saving dozens of lives during the 12 June 2016 Orlando shooting.

Imran Yousuf is Hindu, not Muslim.

Following the 12 June 2016 mass shooting at the Pulse nightclub in Orlando, Florida, a popular item circulated via Facebook countered widespread reporting about the gunman (and his possible ties to radical Islam) by focusing on the fact that is was a Muslim man who had saved many lives at the scene of the shooting:

While one Muslim went on a shooting rampage, another risked his life to save people. Why isn't this highlighted too?
‪#‎OrlandoShooting‬

However, a number of contemporaneous news articles did in fact cover the story of former U.S. Marine Imran Yousuf and his actions during the mass shooting. Marine Corps Times, for example, profiled Yousuf (an "engineer equipment electrical systems technician in the Marine Corps from June 2010 to May 2016 ... deployed to Afghanistan in 2011"), who was working as a bouncer at Pulse at the time of the shooting incident:

A Marine veteran who served in Afghanistan is being hailed as a hero for helping scores of people escape from an Orlando nightclub targeted by a terrorist.

When Imran Yousuf, a bouncer at the Pulse nightclub, heard the gunfire break out early Sunday morning, he told CBS News that recognized it immediately.

"You could just tell it was a high caliber," said Yousuf, a former sergeant who just left the Marine Corps last month. That's when his Marine Corps training kicked in, he said. He ran toward a locked door that people had huddled around, too terrified to move.

“I'm screaming 'Open the door! Open the door!'” Yousuf told CBS. “And no one is moving because they are scared ... There was only one choice — either we all stay there and we all die, or I could take the chance, and I jumped over to open that latch and we got everyone that we can out of there."

By creating the exit, Yousuf estimated that about 70 people were able to get out of the nightclub safely. Forty-nine people were killed inside the nightclub and another 53 were injured. It was the worst mass shooting in U.S. history, and was carried out by a man who reportedly called 911 to pledge allegiance to the Islamic State group.

A 13 June 2016 Facebook post published by Yousuf (who expressed regret that he couldn't save more lives during the shooting) read as follows:

There are a lot of people naming me a hero and as a former Marine and Afghan veteran I honestly believe I reacted by instinct. I have lost a few of my friends that night which I am just finding out about right now and while it might seem that my actions are heroic I decided that the others around me needed to be saved as well and so I just reacted ... We need to show our love and profound efforts to the families and friends who have lost someone and help them cope with what happened and turn our efforts to those who truly need it ... Once again I sincerely thank everyone and bless all those who are recovering and trying to make sense of it all.

Although it was widely claimed in social media posts that Yousuf is a Muslim, news articles described him as Hindu (not Muslim):

Imran Yousuf, a 24-year-old Hindu who left the Marine Corps just two months earlier, broke down in an interview with CBS News as he said: “I wish I could have saved more to be honest ... there are a lot of people dead.”

The Hindu also correctly noted Yousuf is a Hindu of Indian descent:

Imran Yousuf, a 24-year-old bouncer at the Pulse nightclub, heard the gunfire break out early on June 12 morning.

“The initial one was three or four [shots]. That was a shock. Three of four shots go off and you could tell it was a high calibre,” Yousuf, a ‘Hindu’ whose family had migrated to Guyana from India four generations ago, told CBS News. That’s when his Marine Corps training kicked in, said Yousuf, a former sergeant who left the Marine Corps last month.

“Everyone froze. I’m here in the back and I saw people pouring into the back hallway, and they just sardine pack everyone.”

It's true Imran Yousuf served in the U.S. Marines and has been widely hailed for saving as many as 70 clubgoers during the Orlando shooting, but the aspect of his story that has most intrigued many viewers is not true: Yousuf is Hindu, not Muslim.