Offenses allegedly made "non-detainable" by the legislation include second-degree murder and drug-induced homicides. 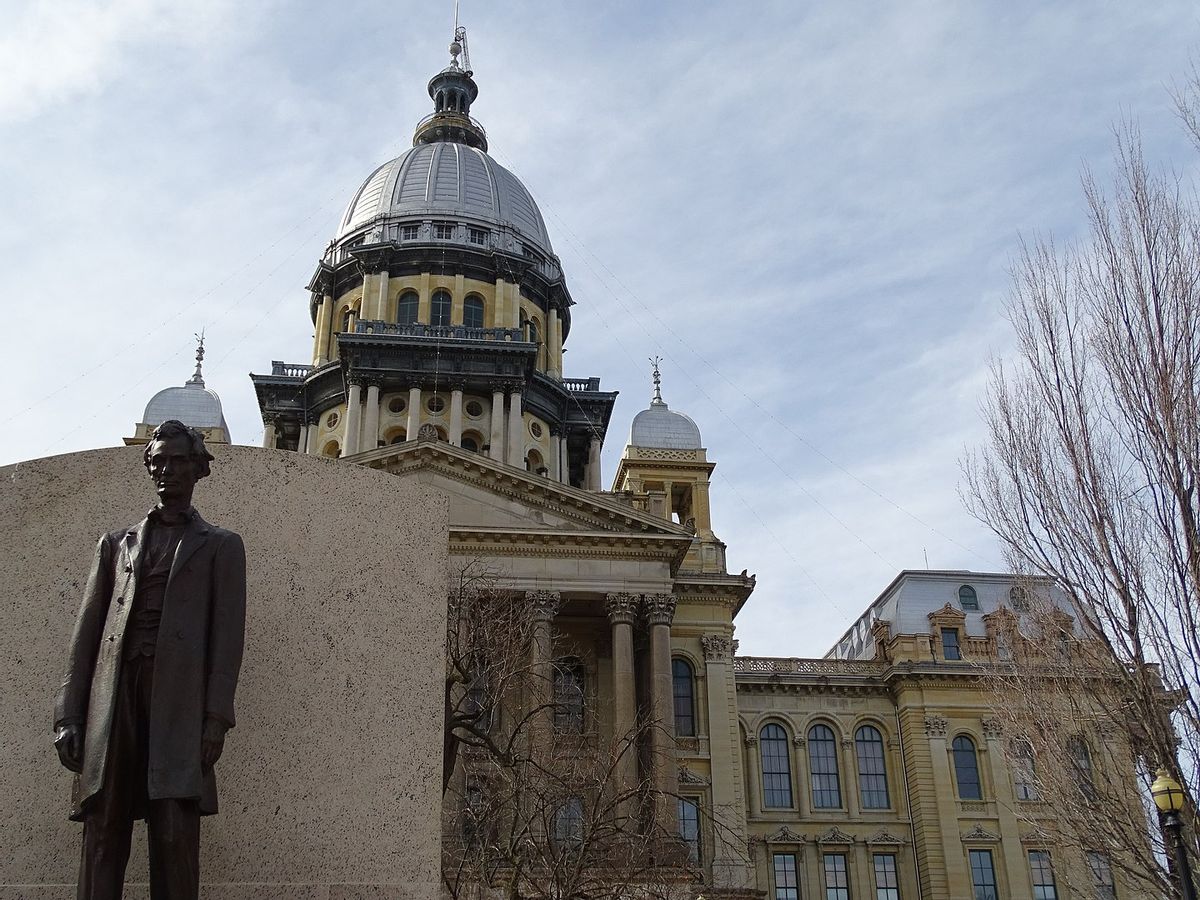 Claim:
Illinois passed the SAFE-T Act, which will go into effect in January 2023 and will make some violent crimes, including murder and homicide, non-detainable offenses prior to trial, which means violent criminals will be released without bail.
Rating:

The Illinois SAFE-T Act was signed into law in February 2021. Within that legislation is the Pretrial Fairness Act, which will go into effect Jan. 1, 2023, eliminating cash bail in all pretrial release decisions.

While this act does aim to reduce the number of people detained in jail while they await trial, pretrial release can still be denied when any defendant “poses a specific, real and present threat to any person or the community.” I.e., the act does not allow pretrial release without a judge considering the severity of the case first.

In passing this act, Illinois became the first state in the country to abolish cash bail, defined as payments for jail release for arrested people who are still waiting for their cases to be heard in court. While the SAFE-T Act was signed into law by Gov. J.B. Pritzker in February 2021, and many portions of it are already in effect, the no-cash bail policy will take effect on Jan. 1, 2023.

The no-cash bail policy is part of the Pretrial Fairness Act, a piece of legislation ensconced within the SAFE-T Act that creates new processes for pretrial release and detention decisions. Ahead of its implementation, it had faced opposition from Republicans, as well as law enforcement, who argued that these changes would put the public and law enforcement officers at risk.

A newspaper clipping had been making the rounds on Twitter and other sites claiming that Illinois was instituting "The Purge," a reference to a movie in which all violent crime is legal for a day. Such policies, according to the tweet below, would mean “criminals” could no longer be detained or required to pay bail in order to be released for violent offenses including “second degree murder,” “drug-induced homicide,” “arson,” “aggravated battery,” “kidnapping,” and more:

What does the law actually state? To explain, it's necessary to understand why there have been calls to abolish cash bail in the first place. According to the Center for American Progress, three out of five people sitting in U.S. jails have not been convicted of a crime, amounting to nearly half a million people languishing in jail cells before trial. This is in part due to the cash-bail system operated by most jurisdictions across the country that the Center describes as “criminalizing poverty.” People who are unable to afford bail remain in detention while awaiting trial for weeks or months, and the effects of this process are felt mostly by impoverished communities of color.

Indeed, the Illinois Criminal Justice Information Authority (ICJIA) reported “that of 100 individuals who have a bail-bond hearing, 34 are detained pretrial due to inability to pay cash bail” nationwide in 2009. Covering the cost of bail is too often prohibitive for many defendants, who can languish there for years without trial. Many point to the case of Kalief Browder in New York, who at 16 was held in Rikers Island for three years from 2010 to 2013 without being convicted of the charges that led to his arrest, because his family could not afford the $3,000 bail cost. Accused of stealing a backpack, Browder killed himself two years after his release from prison.

In the state of Illinois, based on 2016 data, “90 percent of those held in jail statewide [were] in a pretrial detention status, affecting more than 267,421 pretrial jail detainees per year.” They found that this practice was also costly to the state, “estimated at $143 per person per day.”

This is where the Pretrial Fairness Act comes in, advocates say, a proposal developed by members of the legislative Black Caucus and a number of grassroots groups.

On pretrial detention, the act states: “Detention only shall be imposed when it is determined that the defendant poses a specific, real and present threat to a person, or has a high likelihood of willful flight.”

The act also states: “Pretrial release may only be denied when a person is charged with an offense listed in Section 110-6.1 or when the defendant has a high likelihood of willful flight, and after the court has held a hearing under Section 110-6.1.”

The offenses listed under Section 110-6.1 include when:

[...] the defendant who is charged with a forcible felony offense for which a sentence of imprisonment, without probation, periodic imprisonment or conditional discharge, is required by law upon conviction, and it is alleged that the defendant's pretrial release poses a specific, real and present threat to any person or the community.

The act goes on to include stalking, aggravated stalking, domestic battery, discharge of a firearm, and more. Under the new law, judges will consider each case on an individual basis to determine release and base their decisions on whether the suspect is a threat to the community or a flight risk.

Where Did the Misleading Claims About the Act Come From?

The claims in the tweet quoted above are in line with what numerous Republicans had been saying about the pretrial reforms in the SAFE-T Act.

For example, Illinois State Rep. Patrick Windhorst told the media: “So there are a whole list of violent crimes, burglary, robbery, arson, kidnapping, almost all drug offenses even drug distribution, DUI offenses, even DUI offenses that are involving a fatality, that do not qualify for detention under the Illinois Safety Act. To me, that’s going to mean a lot of individuals are committing crimes and being released immediately, if not within a couple of days.” Others have gone further to say that this act empowers domestic abusers, drug cartels, and others to commit violent crimes without being detained.

Mailings of articles similar to the claims in the above tweet criticizing Pritzker and the SAFE-T Act came up in a Chicago Tribune investigation that found they were, “tailored to specific areas and sent to voters throughout Chicagoland under such labels as 'Chicago City Wire,' 'DuPage Policy Journal,' and 'Will County Gazette,' [and] are filled with purported news articles containing misinformation about the effects of criminal justice reforms enacted under Pritzker. The mailings contend the new law will free dangerous criminal suspects from jail and unleash them into the suburbs.”

The Tribune investigation described political mailings similar to the one posted in the above tweet that “state the new law 'mandates' murder suspects awaiting trial be released from jail and gave a list of charges that ... were 'non-detainable.'”

Pritzker claimed these mailings were the work of “racist political consultant” and right-leaning radio show host Dan Proft, who also is a financial backer of Republican gubernatorial candidate Darren Bailey. Proft, in turn, challenged Pritzker to name “one specific item in the newspaper you excoriate that is untrue or inaccurate.” He also dismissed Pritzker's concerns about the publications, telling NBC 5, "Newspapers spreading misinformation and representing only one point of view? Pritzker must be talking about the Chicago Tribune and the NPR/AFL-CIO (Chicago) Sun-Times.” Proft has not denied his role in spreading these materials.

A number of Illinois state attorneys subsequently wrote in the Chicago Tribune that there had been spikes in crimes since the passage of the SAFE-T Act, and the upcoming abolition of cash bail would create major safety issues. “For instance, violent offenders who are released on electronic monitoring and choose to violate the terms of their release have to be in violation for 48 hours before law enforcement can do anything about it,” they wrote.

“Eliminating bail clearly contradicts previously established and superior law, places crime victims at a greater risk to be re-victimized, and unnecessarily subjects witnesses to threats and intimidation,” they claimed.

Some domestic violence advocates, contrary to Republican claims, have said they are happy with the protections included in the law. Under the pretrial reforms, people charged with domestic violence could be held for 24 to 48 hours to allow the judge to review evidence for a hearing to determine whether the accused should be incarcerated or released, based on their perceived risk to others. In addition, the act created a Domestic Violence Pretrial Practices Working Group and an Oversight Board to oversee data collection and analysis.

Ultimately the goal of the reforms is to determine pretrial release not on the basis of whether a defendant can afford to post bail, but on the risk posed by that person to others. Contrary to what the pamphlets or online posts claim about the SAFE-T Act, it does not allow pretrial release without a judge considering the severity of the case.

“What You Need To Know About Ending Cash Bail.” Center for American Progress, https://www.americanprogress.org/article/ending-cash-bail/. Accessed 12 Sept. 2022.