No, This 'Illegal Aliens' Meme Does Not Show the US Border

"The difference is obvious." 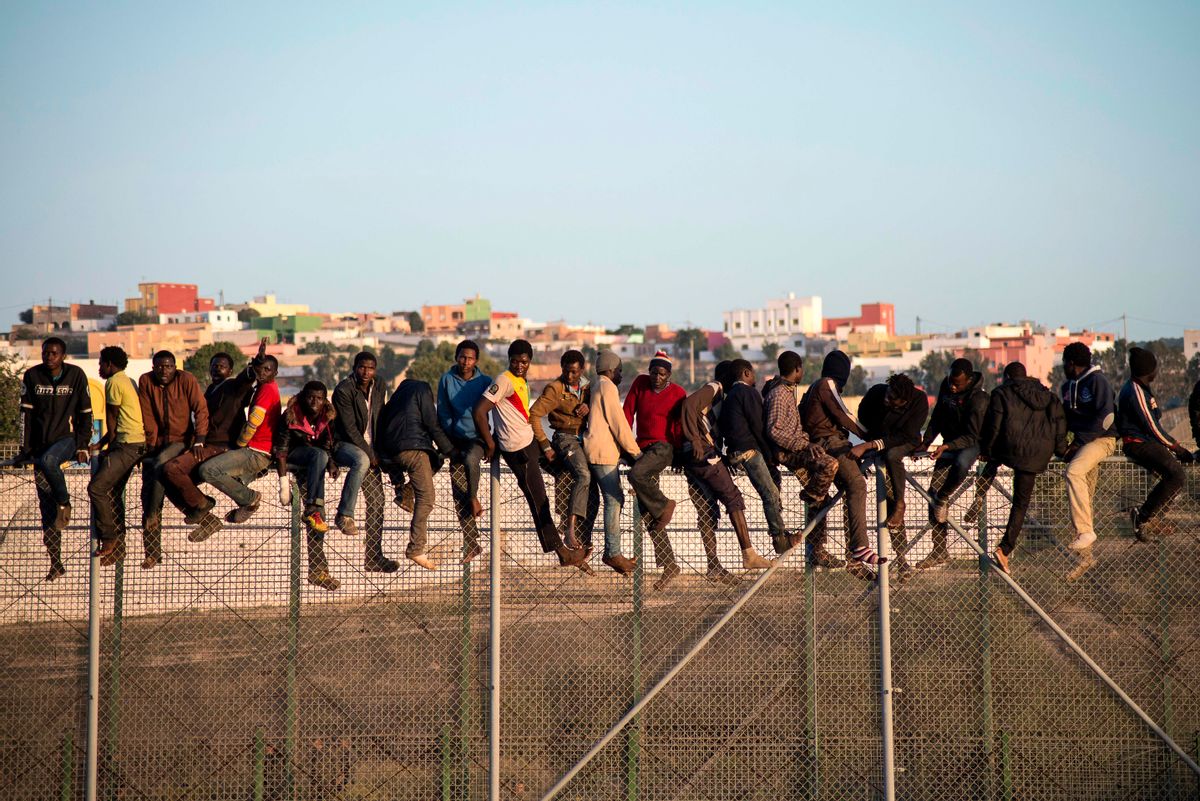 This meme about immigration is often reposted with captions about America and Democrats. While the top picture does indeed show a real naturalization ceremony that happened in the U.S., the bottom photograph was captured on the Spain-Morocco border.

On April 5, 2019, a meme about American immigration was shared on Facebook. It mentioned immigrants and "illegal aliens," ending with the phrase, "The difference is obvious."

The top picture set the scene with a naturalization ceremony with American flags. The bottom photograph depicted what appeared to be migrants on top of a tall fence. The meme made it appear as if the fence was along the U.S.-Mexico border. The reference to "illegal aliens" referred to people entering the country without legal permission.

Six days later on April 11, U.S. Rep. Steve King, a Republican who represented the state of Iowa at the time, reposted the meme. His caption read: "Learn the difference, Lefties."

We found multiple Facebook users who reposted the meme with captions about American immigration. Others mentioned Democrats.

A repost from Aug. 17, 2021, read: "No guarantee they are vaccinated." This appeared to refer to the picture of people on top of the fence in relation to unfounded COVID-19 fears.

The meme continued to be shared in October 2021, when we first published this story.

It's true that the top picture in the immigration meme showed a real naturalization ceremony in New York. It took place on July 3, 2018. However, the photograph of the people atop the fence was not captured on the U.S.-Mexico border. In fact, it had nothing to do with North America or even South America.

The picture appeared as the 18th photograph in a slideshow on the website for La Verdad, a Spanish-language daily newspaper based in Murcia, Spain. The incident in the picture took place at the Spain-Morocco border in October 2014, long before the COVID-19 pandemic. A Google translation of the Spanish caption read: "Dozens of immigrants try to jump over the Melilla fence. Of the 200 immigrants who have attempted the jump, around a hundred have managed to climb onto the railings of the fence and about 70 have remained hanging for hours."

On Oct. 23, 2014, The Guardian reported on the background of what was happening on that border: "Each year thousands of Africans – many of whom have spent years traveling across north and sub-Saharan Africa – try to reach Europe by making it past the fortified fence that separates Morocco from the Spanish enclaves of Melilla and Ceuta. Many of them spend months living in makeshift camps on the Moroccan side, waiting for the opportunity to rush the fence."

Also published was the fact that "an immaculately groomed golf course complete with white-clad golfers teeing off" was what greeted the African migrants:

In sum, a viral meme began with a picture of a naturalization ceremony and American flags. However, the "illegal aliens" photograph was an old picture that was shot at the Spain-Morocco border. The meme ended with the words: "The difference is obvious." Since the second photograph had nothing to do with U.S. borders, we have rated this fact check as "Miscaptioned."