Does Iceland have a majority atheist population, and correspondingly admirable policies with respect to morality, crime, and economics? 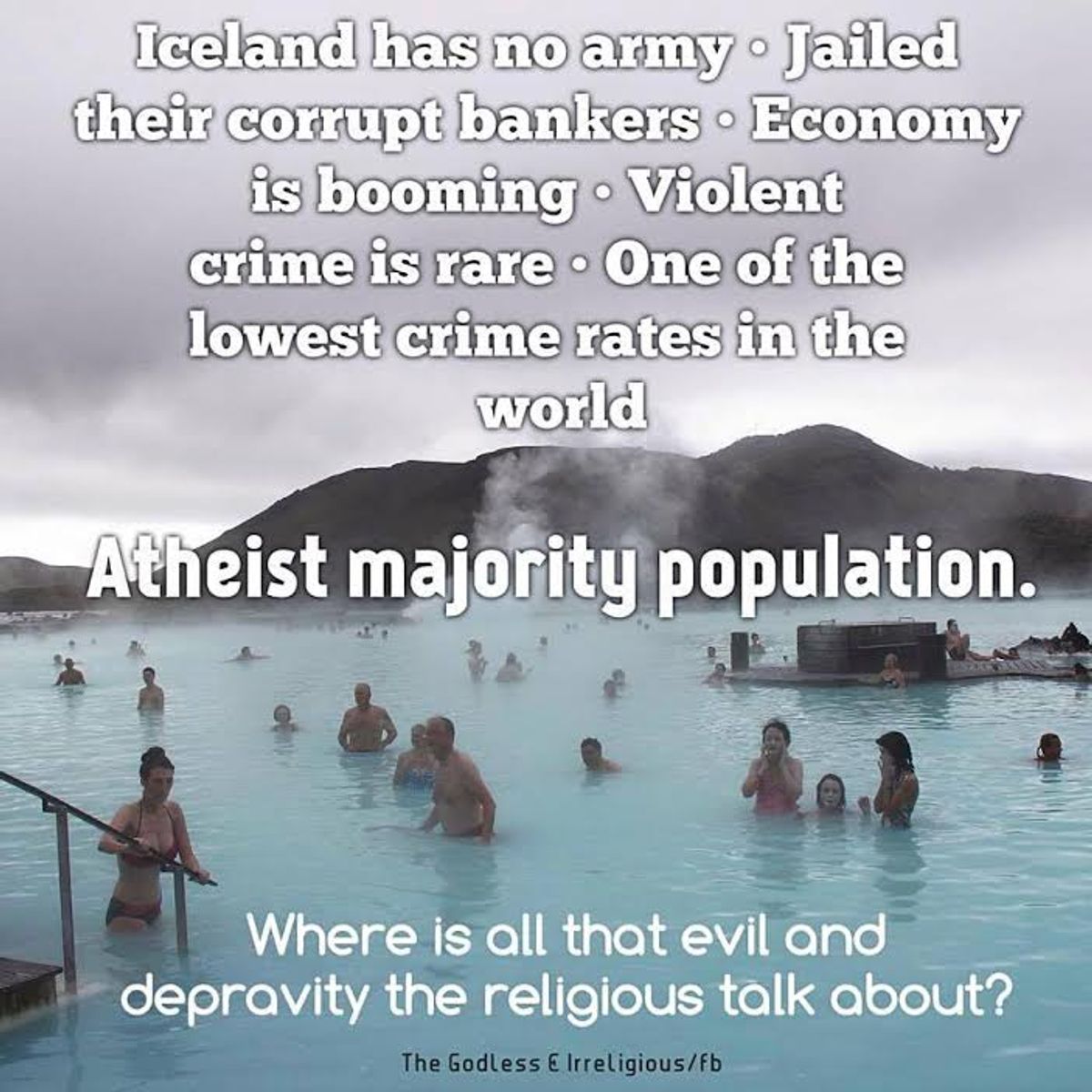 [green-label]Claim:[/green-label] A meme makes a number of assertions about Icelandic society.

[green-label]WHAT'S TRUE:[/green-label] Iceland's crime rates are among the lowest in the world; Iceland jailed some bankers after the 2008 economic crash; Iceland has no standing army.

[green-label]Origins:[/green-label] On 30 October 2015, the Facebook page "The Godless and Irreligious" published the above-reproduced meme containing multiple statements about Iceland that closely resembled another current image macro about life in Denmark.

The meme made several assertions tied to a primary claim: that Iceland enjoyed peace and prosperity due to (or in spite of) being a country with an "atheist majority population." That aspect of the meme was easy to identify as false, as Iceland itself reports that 80% of its citizens identify as Lutheran. The WIN-Gallup International "Religion and Atheism Index" ranked Iceland moderately high in terms of the proportion of self-identified atheists in the population at 10%, which is congruent with the 80% Lutheran metric cited earlier. That data point appeared to originate from Table 6 [PDF] in the report, gleaned from the following question:

Iceland was placed in the "top ten" of atheist populations with a 10% share, but there's no way to contort those demographics into accurately describing the country as having an "atheist majority population." As such, the central element of the meme's claim is false.

It is well established that Iceland is the only NATO member nation with no standing army; however, extant agreements cover the country should it come under threat:

Officials stressed that the United States will continue to honor its 1951 defense agreement with Iceland, which has no armed forces of its own. Iceland is also a NATO member and is protected by Article 5 of the North Atlantic Treaty, which says an attack on any NATO nation is considered an attack on all 26 member nations. U.S. officials plan to meet soon with Icelandic officials to discuss the future of the U.S.-Icelandic military relationship.

It's similarly not in dispute (nor related to religion) that Iceland famously prosecuted some bankers in a landmark case involving market manipulation. A 13 February 2015 Reuters article reported that:

Iceland's Supreme Court has upheld convictions of market manipulation for four former executives of the failed Kaupthing bank in a landmark case that the country's special prosecutor said showed it was possible to crack down on fraudulent bankers.

Hreidar Mar Sigurdsson, Kaupthing's former chief executive, former chairman Sigurdur Einarsson, former CEO of Kaupthing Luxembourg Magnus Gudmundsson, and Olafur Olafsson, the bank's second largest shareholder at the time, were all sentenced to between four and five and a half years.

Iceland's spectacular economic crash and impressive recovery from the global financial crisis of 2008 was extensively documented and commonly referenced as an "object lesson," albeit one that other sources have since termed a "myth":

Iceland's recovery has become a myth wrapped in a legend inside a legend. It let its banks fail, slashed household debt, let its currency collapse, put capital controls in place — and now it's doing better than those countries that did austerity! In reality, Iceland let its banks fail for foreigners, wrote down household debt only after their laws had made it worse, had no choice but to watch the krona plummet, but, at the same time, tried to keep it from plunging too far by limiting how much money people could take out of the country. Oh, and it did more austerity than any country not named Greece. The truth is a more complicated place.

Economic progress in Iceland since the 2008 meltdown has been steady, but tentative. An April 2015 Reuters piece described a nation that had improved its fortunes but was not yet fully out of the woods (much less "booming"):

Since the crash, Iceland has been on a slow path to recovery. Unlike in countries in the euro zone that hit trouble and could not devalue their currencies, a fall in the crown helped restore Iceland's competitiveness. Despite the capital controls, foreign businesses were allowed to repatriate profits, tempting them to stay.

Iceland's GDP exceeded pre-crisis levels for the first time last year — in crowns if not dollars. Unemployment is less than 5 percent, inflation is below a 2.5 percent target and state finances reached a surplus last year — signs that the time to relax capital controls has arrived.

Iceland's notorious absence of crime and violence made headlines worldwide in December 2013, when Icelandic police shot and killed a man for what was believed to be the first time in the country's history. (Iceland's head of police described the incident as "without precedent.") Reporting at the time typically noted that Iceland's crime rates remained static and remarkably low:

Iceland, a country where gun ownership is widespread, has one of the lowest violent crime rates in the world.

The 2011 Global Study on Homicide by the United Nations Office on Drugs and Crime (UNODC) found that the country's homicide rate never went above 1.8 per 100,000 population on any given year during the period between 1999 and 2009.

It is ranked 15th in the world in terms of legal per capita gun ownership while around 90,000 are held among the population of just over 300,000, according to gunpolicy.org, which is hosted by the University of Sydney.

Iceland continues its recovery in the aftermath of a severe economic downturn in 2008. Initially, the financial collapse caused a relatively minor up-tick in general crime, which has improved steadily with each successive year. However, based on information from the Icelandic National Police, local news sources, and previous reporting, crime is comparatively lower than in many developed countries. This is partly due to a high standard of living, a small population, and a well-trained and educated police force.

Even though Iceland has a relatively low crime rate, reports of minor assaults, automobile theft, vandalism, property damage, and other street crimes continue, especially in Reykjavik. The majority of these crimes are attributed to juvenile delinquents and drug users. According to police, the rise in pickpocketing was the result of an influx of Eastern European immigrants.

So while it's true that Iceland jailed bankers, tentatively recovered after being badly affected by 2008 global financial meltdown, and has historically enjoyed remarkably low rates of violent crime, the country does not have a "majority atheist population." Moreover, none of the nation-ranking metrics by which Iceland is highly ranked relates to religion (or lack of faith) in any ostensible way.