No, House Democrats Didn't Vote to Let 'Non-Citizens' Vote in US Elections

It's a "straw man" logical fallacy. 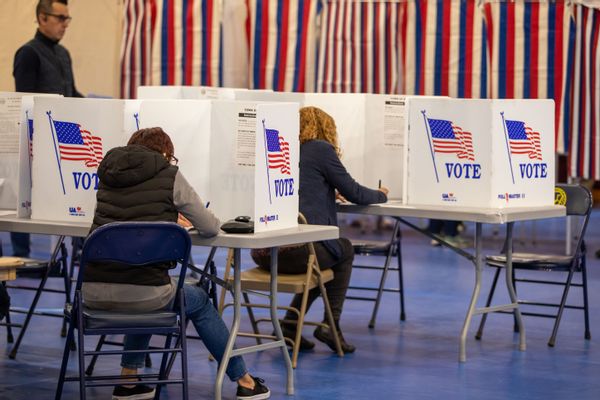 Since September 2022, some internet users have shared screenshots of a tweet by Republicans on the U.S. House Judiciary Committee claiming that their Democratic colleagues "just voted to support NON-CITIZENS voting in our elections." The posts are misleading. 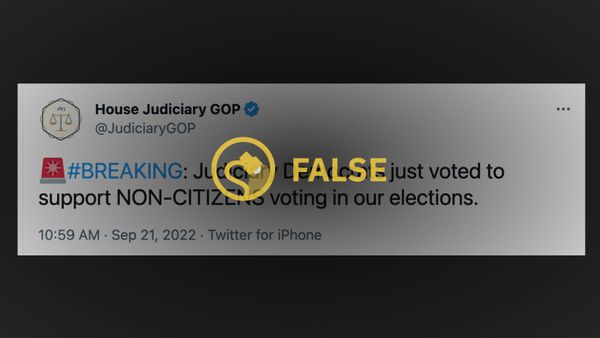 To be clear, Democrats on the House Judiciary Committee didn't vote to change existing laws that bar non-citizens from voting in U.S. elections. We will explain below.

Non-citizens are barred by federal law from voting in federal elections. In limited cases, local jurisdictions have passed laws that allow non-citizens to vote in local elections only — for example, school board and city council elections.

In September 2022, U.S. Rep. Nikema Williams, D-Georgia, introduced H.R. 8770, titled the "Expanding the Voluntary Opportunities for Translations in Elections Act." The bill, which has not been passed as of this writing, would make "several clarifications and improvements" to Section 203 of the Voting Rights Act, said House Judiciary Committee Chairman Jerry Nadler, in comments supporting the bill during a hear on Sept. 21, 2022.

Section 203 of the Voting Rights Act governs when elections officials must provide ballot materials in languages other than English to constituents. The U.S. Department of Justice on its website states the law affects "localities where there are more than 10,000 or over 5 percent of the total voting age citizens" who are speakers of a single minority language group, based on U.S. Census data. Elections materials must be provided in both English and the language in question, when the threshold is met.

H.R. 8770, according to the bill's text, would require the U.S. attorney general to notify jurisdictions if a minority language population is on the verge of triggering translations of voter materials under Section 203, and provide grants to jurisdictions that wish to provide translated materials to language populations, even if it's not required by Section 203. The bill makes no mention of changing the already-existing law barring non-citizens from voting.

Where Did Claim about Non-Citizens Voting Come from?

The claim stems from an amendment proposed by U.S. Rep. Tom McClintock, R-California, who stated that his amendment is intended to clarify "that this bill does not intend or permit or encourage non-citizens to vote," tying English-language fluency with citizenship status.

McClintock stated that, "A requirement of citizenship is to speak English. This is fundamental to a democratic society, the abilities of citizens to talk things out among ourselves."

But that's true only in some cases, namely when someone applies for naturalization.

Prospective naturalized American citizens are tested on their English language skills, but exceptions exist. U.S. Citizenship and Immigration Services (USCIS) states on its website that older adults who have legally resided in the U.S. for years are exempt from the language test, as are those who can't take the test due to a disability.

Furthermore, the U.S. has a number of indigenous languages spoken in homes, like Navajo, Dakota, and Alaska native languages, while millions of American citizens speak languages other than English at home.

The Claim Is a 'Straw Man' Logical Fallacy

As we have previously reported, logical fallacies underly many misunderstandings, items of misinformation, and rumors. A straw man argument "replaces a person's original argument with one that is exaggerated or distorted and attacks the extreme version, as if that claim was made by the person in the first place. In essence, this new argument — or 'straw man' — becomes easier to refute or defeat."

In this case, the original proposed bill sought to make changes to a section of the Votings Rights Act that deals with language access in ways that could expand ballot translation to more non-English speaking voters. McClintock's amendment ties citizenship with English language fluency, alleging that translating elections materials to languages other than English could be interpreted as encouraging non-citizens to vote.

The screenshot circulating on social media alleges that something that never happened, happened, namely that Democrats had voted to give non-citizens the right to vote in the nation's elections, when they had in fact voted down an amendment to proposed legislation that restated existing federal law.