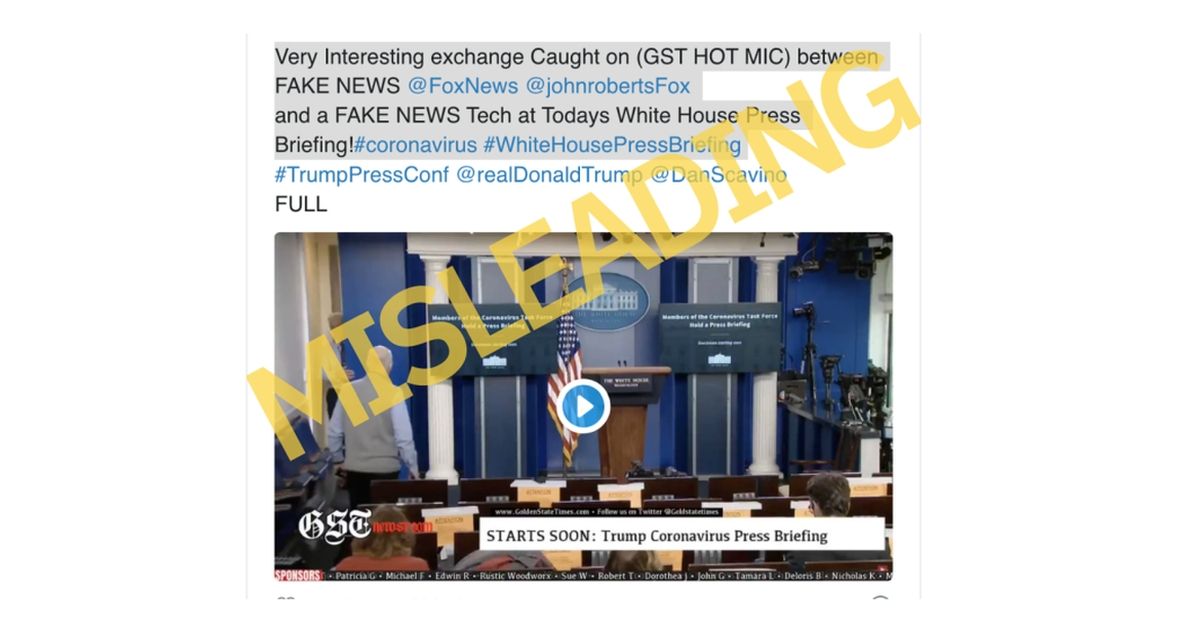 Claim:
A video documents a hot-mic exchange between Fox News reporter John Roberts and a "fake news tech" in which they admit COVID-19 was a hoax, and that everyone in the news media has already been vaccinated.
Rating:

On April 20, 2020, a video supposedly showing a "hot mic" exchange in the White House briefing room between Fox News reporter John Roberts and another journalist, in which COVID-19 is called a "hoax," went viral on social media.

One posting from the Golden State Times Twitter account racked up more than 1 million views within a few days of its initial posting:

This is a genuine video of Roberts speaking with New York Times photographer Doug Mills (not a "FAKE NEWS tech") before a White House press briefing on April 20, 2020. This video was not deceptively edited, nor was the audio manufactured. However, this video does not capture a narrative-destroying, hot-mic moment. Rather, it shows an informal conversation between two friends and some gallows humor.

The video was widely shared on social media as if it showed members of the news media "admitting" that COVID-19 pandemic was a hoax. Others highlighted a comment from Mills in which he says that "we’ve all been vaccinated." These social media users did not, however, question how these two claims — the disease is a hoax and that everyone has been vaccinated for the disease — could even co-exist. How would you vaccinate against a disease that isn't real?

Roberts told the Associated Press that the exchange captured in this video showed some "sardonic gallows humor" between friends, that the conversation was a "total joke," and that "clearly no one has been vaccinated" because no COVID-19 vaccine yet exists.

The conversation in the above-displayed video largely deals with a recent study from the University of Southern California that found the infection rate in the state was likely much higher than originally reported. While this study suggests that more people may be carrying the virus, it also may mean that the fatality rate could be much lower.

In sum, the viral video truly shows an informal exchange between Roberts and Mills in which Mills joked that COVID-19 was a hoax. While this video was shared as if it featured a "bombshell" revelation, it really just showed an off-the-cuff exchange between two friends.

In fact, at the end of this viral video, after Roberts has told his friend Mills about the new study, Mills jokes that "it was a hoax," to which Roberts responds: "No, I don't think it was a hoax."