The Asian giant hornet may have rightly earned the nickname "murder hornet," but don't underestimate the Japanese honeybee. 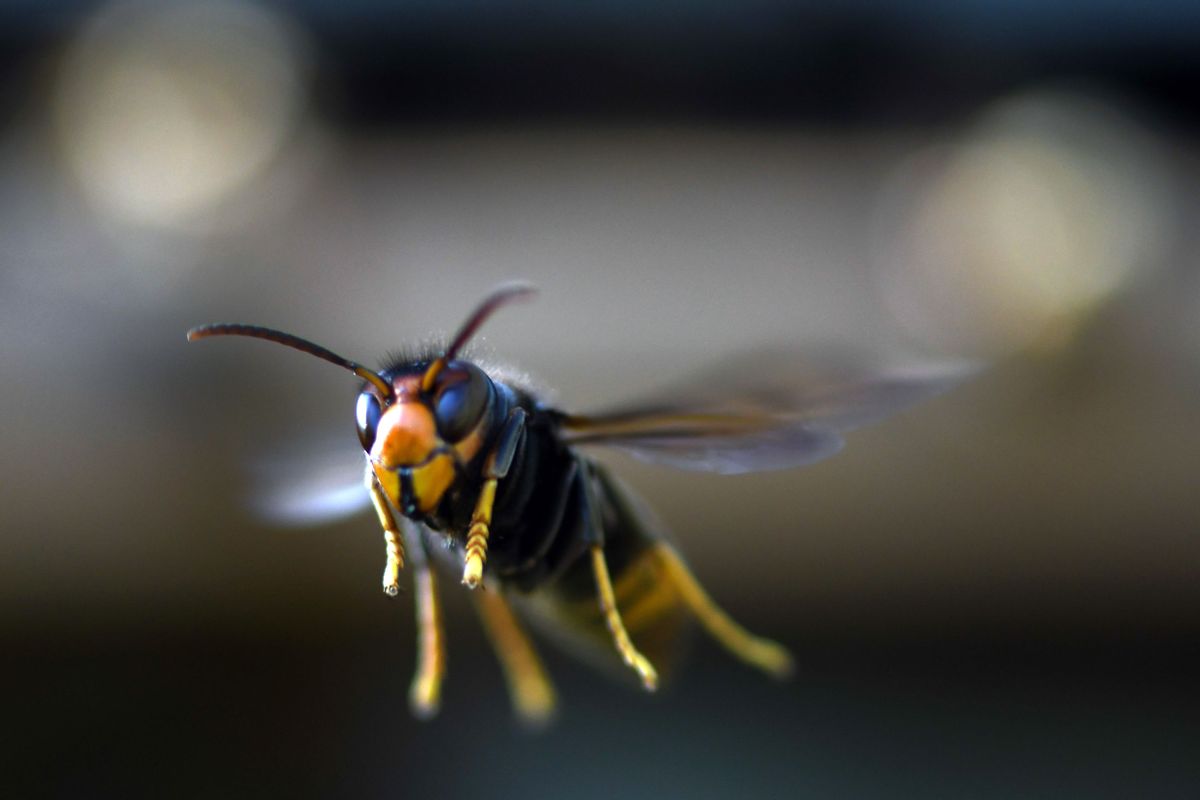 Claim:
A photograph shows a group of honeybees "cooking" a "murder hornet" to death.
Rating:

This defensive mechanism has not been observed in all species of honeybees.

In May 2020, shortly after The New York Times reported that "murder hornets," a nickname for the Asian giant hornet, had been spotted in the United States and posed a threat to honeybees there, a photograph supposedly showing one of these unusually large insects being "cooked alive" by a group of bees started to circulate on social media:

Bees killing a murder hornet by raising their temperature in order to cook it alive. We haven't been able to determine too many specifics about this particular photograph. It has been online since at least 2012 and was reportedly taken by Masato Ono, a researcher from Tamagawa University who has published several studies on bees, wasps, and hornets.

While we aren't sure about the specifics surrounding this image, Japanese honeybees truly form "hot defensive bee balls" that can "cook" a giant hornet to death.

The Japanese honeybee and the giant hornet are waging an epic war. The hornets, which can grow up to 1.6 inches (4 centimeters) long, attack the nests of the bees, and the honeybees will surround a hornet and "cook" it.

The honeybees' stingers can't penetrate a hornet's thick outer skin, so the bees swarm around an attacker instead, forming a spherical bee ball, and use their vibrating flight muscles to create heat. The mass of bees will heat the area up to 116 degrees Fahrenheit (47 degrees Celsius), enough to kill the hornet.

A video from National Geographic shows this "bee ball" defense in action.

National Geographic writes: "Japanese giant hornets pack a venomous sting so strong it can dissolve human tissue. But when a hornet scout enters a beehive, watch as the bees turn the tables on their enemy — and literally bake the predator to death!"

While this "hot defensive bee ball" was once believed to be a defense mechanism unique to Japanese honeybees, researchers have since observed this behavior in European honeybees, the most common pollinator in the United States. Here's an excerpt from the 2017 study published in Entomological Science:

The Japanese honeybee, Apis cerana japonica Radoszkowski, uses unique generation of heat by bee‐balling to defend against, overheat and kill predacious Japanese hornets. We have now observed the European honeybee, Apis mellifera Linnaeus, using similar bee‐balling behavior and heat generation against the Japanese yellow hornet, Vespa simillima xanthoptera Cameron. We monitored temperatures in the center of the bee‐ball and inside thoracic muscles of the captured hornet and found that the thoracic internal temperature (45.8 ± 2.32°C) was higher than that of the bee‐ball (44.0 ± 0.96°C). Although the thoracic temperature of captured hornets rose to the upper lethal level, defending European bees also showed some stinging attempts against the hornet, unlike the sympatric Japanese honeybee, which never stings during bee‐balling. The European honeybee bee‐balling behavior consists of three phases: (i) heating; (ii) heat‐retaining; and (iii) break up. Our results suggest that European honeybees kill hornets by raising the body temperature of hornets rapidly without stinging. The tactics of bee‐balling against hornets are complex and may be performed by extended division of labor.

While Asian giant hornets were not widespread in the United States in May 2020, the first sightings of this non-native predator had beekeepers concerned. Ruthie Danielsen, a beekeeper in Birch Bay, Washington, told The New York Times:

The honeybee in Japan has adapted with this predator and learned through generations to protect themselves. [...] Our honeybees, the predator has never been there before, so they have no defense.

A video from the BBC shows giant Asian hornets destroying a colony of "defenseless" European honeybees:

In short, Japanese honeybees have developed a defense against Asian giant hornets ("murder hornets") that involves swarming the large insect in a "hot defensive bee ball" until the predator is essentially "cooked to death."

Ugajin, Atsushi et al.   "Detection of Neural Activity in the Brains of Japanese Honeybee Workers during the Formation of a 'Hot Defensive Bee Ball.'"     Plos One.   14 March 2012.

CORRECTION [7 May 2020]: Article updated to note that this "hot defensive bee ball" technique has also been observed in European honeybees.