Is This a Real Photograph of a Man Holding a 'Homeless N*****s Go Back to Africa' Sign?

The photograph is genuine, but the story behind it is significantly more complicated than it may appear at first glance. 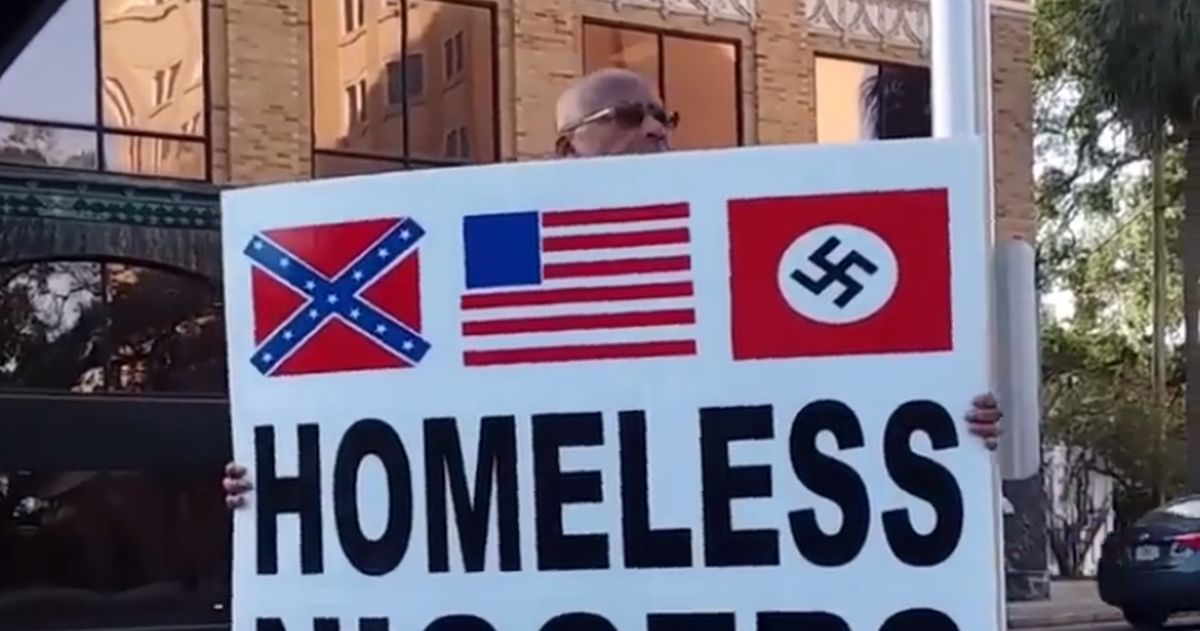 Claim:
A photograph shows a man standing on a street corner holding a large sign that reads "Homeless Niggers Go Back to Africa."
Rating:

The frequency of hate crimes in the United States increased for the fourth straight year in 2017, according to a report released in May 2018 by the Center for the Study of Hate and Extremism at California State University at San Bernardino.

The largest percentage of those crimes were motivated by ethnic or racial bias, the report said, with African Americans the most frequently targeted segment of the population. White supremacist groups and hate speech incidents were also on the rise. So was public awareness of how hate groups have recently grown more emboldened in their displays of racial bigotry.

In mid-2018, social media users began sharing photographs of what they took to be a particularly egregious expression of racial hatred. The images showed a man on a street corner holding a large sign which read "Homeless Niggers Go Back to Africa," a sign clearly visible in this example from Twitter:

In downtown Tampa. I’m speechless and embarrassed to live in this state. pic.twitter.com/gKLAaRHrBe

Some social media users who shared the photographs explicitly called the man pictured holding the sign a "white supremacist":

But despite the fact that the photograph was genuine and matched press reports of an incident that occurred in Tampa, Florida, in July 2018, the story behind the picture -- including the identity of the subject and his motivation for displaying the sign -- was significantly more complex than it appeared at first glance.

A 13 July 2018 article in the Tampa Bay Times supplied the backstory:

It was not an uncommon sight for Tampa residents. Local provocateur Tony Daniel was standing on a street corner, megaphone and racist sign in hand.

But then a woman slapped his sign, police say, and Daniel hit her in the face with his electronic megaphone. Another woman joined the brawl, which spilled into the street.

When it was over, Daniel, 60, was arrested on a charge of aggravated battery with a deadly weapon -- the megaphone -- and booked into the Hillsborough County Jail.

Daniel, a black man, is known for his race-baiting, often targeting African-Americans. His pickup truck displays Confederate and Nazi flags and racial slurs. His repertoire extends beyond signs. Earlier this year, in large part because of Daniel, the Tampa City Council changed its rules to ban vulgar, threatening speech at its meetings.

A motorist captured [the] encounter on video, which was reviewed by the Tampa Bay Times. It initially shows Daniel, accompanied by a woman in a red dress, holding a sign, nearly as tall as he, that says, "Homeless (N------) go back to Africa." On the back side was another racist slur.

Why would an African-American man display such a virulently racist sign in a public place? Not even the Tampa Bay Times, which has covered Tony Daniel's race-baiting antics for years, is sure. The following account is from a May 2017 article about an ongoing dispute between Daniel and Tampa City Hall:

His pickup truck cruises through Tampa with a large sign showing a Confederate flag, a Nazi flag, a photo of a lynching, Mayor Bob Buckhorn's photo, references to Home Depot and multiple uses of the word "n-----."

Vote Buckhorn for Florida governor, it says, adding, "Every n----- vote counts." At the top of the sign, the word appears in letters a foot tall.

People often call City Hall to complain, one nearly in tears. Many suppose a white supremacist is behind the racial slurs and swastikas.

But Daniel, 59, is black. He won't say what he's trying to accomplish. He claims, in fact, that he has "never liked controversy."

In court proceedings, Daniel has described himself as a "protester" against the racist treatment he says he received in dealings with the city and various local businesses:

"Why are you out there with these signs?" County Judge Jennifer Gabbard asked.

"It's a strategy," Daniel told her. "It's a peaceful response to that offense."

Daniel described himself as a "professional protester" associated with the African People's Socialist Party, or Uhuru movement. And he said he would not try to resolve his insurance problem by, for instance, complaining to the Florida Department of Financial Services.

"There are no instances in which I would appeal to any person, white, to resolve any matter for me — no ifs, no ands, no buts," he said in court.

He told Gabbard he's been protesting for 45 years.

As of this writing, Daniel still faces charges of misdemeanor battery for the 13 July 2018 altercation in which he was accused of striking two women with his megaphone.