Are People Hoarding Gas in Plastic Bags During the Shortage? 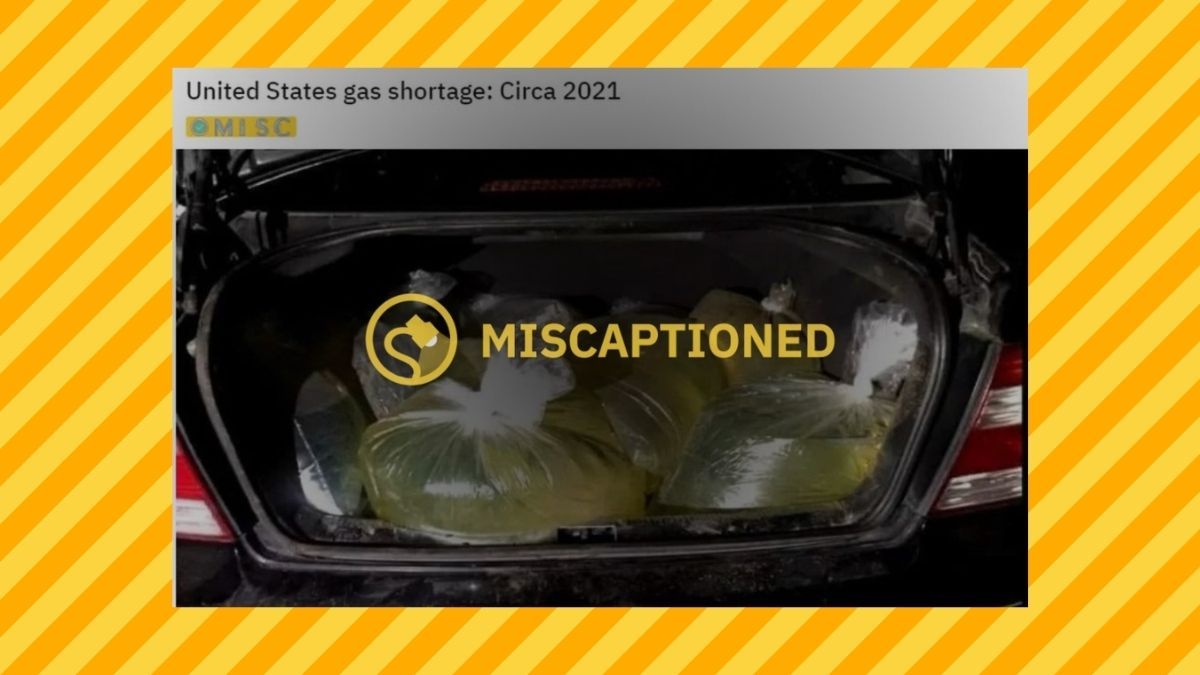 Claim:
A photograph of plastic bags filled with gasoline in the trunk of a car was taken during a gas shortage in the southeast portion of the United States in May 2021.
Rating:

In May 2021, a ransomware attack on the Colonial Pipeline led to an interruption of gas services to the southeastern parts of the United States. This, in turn, lead to some "panic buying" as people rushed to the pumps to fill up extra containers of gasoline. A video supposedly showed a woman filling up plastic bags at a gasoline pump:

The picture of plastic bags filled with gasoline in the trunk of a car comes from a March 2019 incident in which two men attempted to steal gasoline from a gas station in Huauchinango, a city located north of the state of Puebla in central Mexico.

Noticieros.televisa.com reported at the time (translated via Google):

"Elements of the Federal Police Gendarmerie Division, in coordination with personnel from the Secretary of the Navy, detained the drivers of two vehicles that were transporting more than a thousand liters of gasoline in plastic bags, in the municipality of Huauchinango, Puebla."

The video of the woman filling up a plastic bag at a gasoline pump is also several years old. This video first went viral in December 2019, and supposedly shows a woman at a gas station in Houston, Texas.

The video prompted the automotive website The Drive to publish an article informing people that they should never use plastic bags to transport gasoline:

Jason Rudison spotted this woman fueling up at the Kroger gas pumps in Houston, Texas, pouring gas into a plastic bag ...

One catch: Gasoline is heavy! Naturally, this led to a blowout of the woman's first bag, spilling fuel all around the pump. That's when she double-bagged the first bag anyway and put it in her Honda Accord's trunk.

According to Rudison's wife Aisha on Facebook, the woman in the video was warned several times by a couple of other people around her not to fill the plastic bags with gas before Rudison started filling. So, I can't blame Jason for staying far away from this one. She should've gotten the hint from those warnings, and sometimes you just have to accept that you personally can't fix stupid.

While neither of these pieces of media were taken in May 2021, some people truly were "panic buying" gasoline amidst reports of shortages.

Drivers from the East Coast through the Deep South, fearful that a cyberattack on a 5,500-mile long pipeline might leave them stranded, scrambled to fill up their cars Tuesday, leaving some stations across the region short on supplies of gasoline.

The cyberattack Friday on the Colonial Pipeline led to the surge in demand that saw cars lined up at gas stations and prices jump anywhere from 2 to 10 cents in a day.

The East Coast reported a 32.5% increase in demand Monday compared to the previous week, with the Gulf Coast at a 13.1% increase. As of Tuesday night, that demand had left nearly 1,800 stations in Alabama, Georgia, Florida, South Carolina, North Carolina, Maryland and Virginia without gasoline.

The USCPSC went on to urge people only to use containers that have been specifically approved to carry fuel: