Did Adolf Hitler Say That Nazis Are 'Mortal Enemies of the Present Capitalist Economic System'?

While attributed to Hitler, this “leftist” quote actually came from one of Hitler’s political rivals. 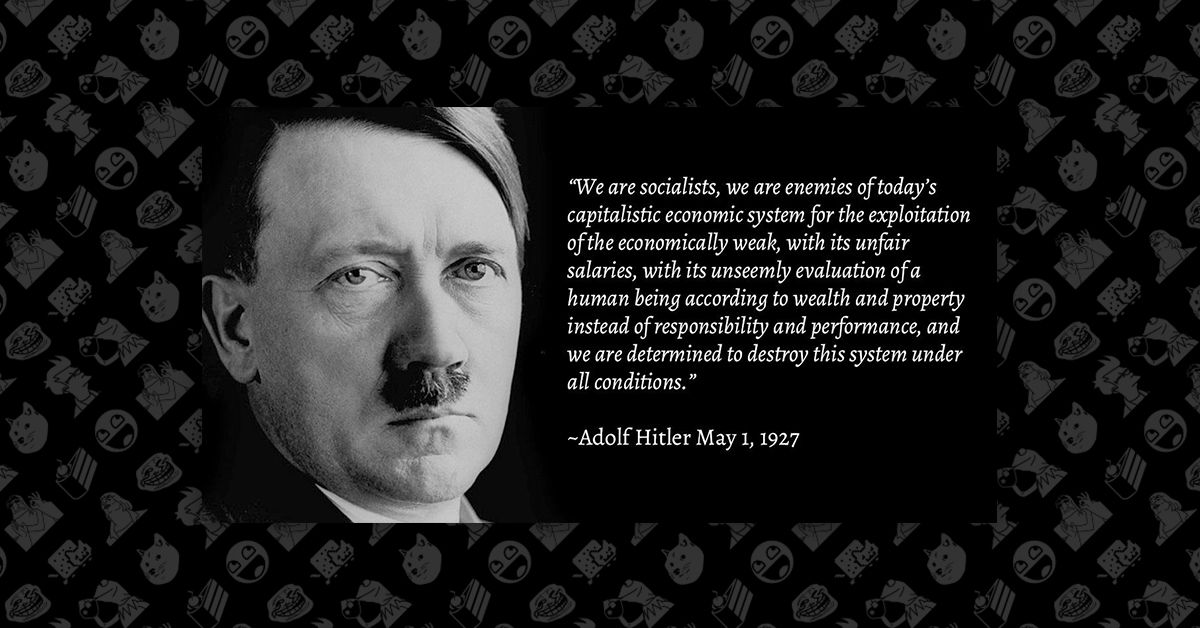 Claim:
Adolf Hitler was a “leftist” who stated that Nazis “are socialists [and] mortal enemies of the present capitalist economic system.”
Rating:

Back in January 2016, conservative web site Louder with Crowder dipped its toes into the world of fact-checking with an article ("MYTH BUSTED: Actually, Yes, Hitler Was a Socialist Liberal") that makes the claim that "leftists" have unfairly rewritten history to paint Hitler as right wing, based in part on the fact that the Nazi party had the word "socialist" in its name.

We are Socialists, enemies, mortal enemies of the present capitalist economic system with its exploitation of the economically weak, with its injustice in wages, with its immoral evaluation of individuals according to wealth and money instead of responsibility and achievement, and we are determined under all circumstances to abolish this system!

While Hitler may have co-opted elements of this language when it was politically expedient, they are not his words. Instead, these are the words of early Nazi party official Gregor Strasser, printed in a 1926 pamphlet titled Thoughts about the Tasks of the Future. That pamphlet, as we will discuss in detail below, attempted to appeal to ultranationalist movements on both the left and the right at a time when the Nazis were a fringe political party seeking to carve out as big a part of the German electorate as possible.

Strasser's pamphlet went on to make these decidedly non-socialist sounding statements as well:

The spirit of our National Socialist idea has to overpower the spirit of liberalism and false democracy if there is to be a third Reich at all!  Deeply rooted in organic life, we have realized that the false belief in the equality of man is the deadly threat with which liberalism destroys people and nation, culture and morals. violating the deepest levels of our being!

We have to reject with fanatical zeal the frequent lie that people are basically equal and equal in regard to their influence in the state and their share of power!  People are unequal, they are unequal from birth, become more unequal in life and are therefore to be valued unequally in their positions in society and in the state!

Gregor Strasser was a prominent Nazi propagandist in the formative days of the Nazi party. A World War I veteran active in post-war anti-Soviet paramilitary activities, he — along with Adolf Hitler — became one of the two most prominent voices for the party as it attempted to build a cohesive ideology and broad support across the various factions within a deeply divided Germany.

As discussed in a biography of Strasser:

Just as Hitler may be said to have pioneered and consolidated the party in southern Germany, so much the same was true of Strasser in the north. Strasser’s success there clearly identified him as the man next in importance to Hitler [...]

The confrontation was most crucial in this period of National Socialism, for it encompassed basic matters of ideological orientation, organisation, tactics, and possibly leadership. Strasser was the guiding spirit of the ‘northern faction’, and he even put his authority behind a draft ‘socialist’ programme of action as an alternative to the one endorsed by Hitler for the party in 1920 which was supposed to be immutable.

As it happens, Hitler was not a fan of Strasser’s ideas. While his efforts helped the Nazi’s with early electoral victories in the elections of 1928, his views became dangerously discordant with Hitler’s, and he was assassinated on Hitler’s orders in 1934:

By the early 1930s Strasser was head of the Nazi political organization and second only to Hitler in power and popularity. As leader of the party’s left wing, however, he opposed Hitler’s courting of big business as well as his anti-Semitism and instead favoured radical social reforms along socialist lines. He finally resigned his party offices in 1932. Hitler was able to avert large-scale losses in membership after Strasser’s defection, and, after Hitler’s accession to the chancellorship, Strasser lost almost all of his influence. He was murdered on Hitler’s orders during the [Ernst] Röhm purge of 1934.

The fact that Hitler disagreed with Strasser’s view of "National Socialism" so much that he was killed in part for holding those views makes it all the more absurd to attribute this quote to Hitler, as Louder with Crowder has done.

The political milieu of Germany in the 1920s was a hotbed of political unrest and paramilitary violence that cannot easily fit into simple "left" and "right" binaries. Hitler’s use of "socialism" attempted to borrow the rhetorical devices of the left, but not the ideological ones, as discussed in The Coming of the Third Reich by Richard Evans:

The ‘National Socialists’ wanted to unite the two political camps of left and right into which, they argued, the Jews had manipulated the German nation. The basis for this was to be the idea of race. This was light years removed from the class-based ideology of socialism. [...]

By presenting itself as a ‘movement’, National Socialism, like the labour movement, advertised its opposition to conventional politics and its intention to subvert and ultimately overthrow the system within which it was initially forced to work.

The post suggests that "this nifty thing called 'history' in combination with 'the internet'" can "bust this myth" that Hitler was right wing. However, the web site takes a superficial view of German history based, in large part, on a comically misattributed quote. If anything, Louder with Crowder has made a strong argument for including some books along with that internet research.