Several right-wing web sites circulated a months-old photograph of Hillary Clinton slipping on some stairs as the 'latest evidence' that she is in poor health. 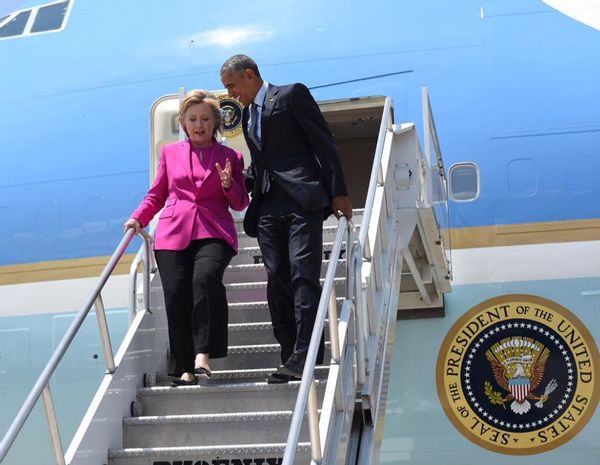 Claim:
An image shows that Hillary Clinton needs help walking up stairs is the 'latest evidence' that she is in poor health.
Rating:

A photograph shows Hillary Clinton getting assistance after slipping on a set of stairs.

The photograph is not recent (it was taken in February 2016) and does not in itself indicate that Clinton is in poor health.

On 7 August 2016, the web site The American Mirror published an article reporting that Hillary Clinton's "health condition" should be a "major issue" of the 2016 presidential race, along with two photographs purportedly showing Clinton being helped up a flight of stairs: The questionable health condition of Hillary Clinton should be a major issue of the 2016 campaign.

The latest evidence comes in the form of Clinton being helped up a set of stairs by multiple individuals outside what appears to be a home.

The photographs received wider attention when they were shared by conservative commentator Matt Drudge on Twitter: Donald Trump on his way the presidency of the United States.

While the above-displayed photographs are real, they are not the "latest evidence" of Clinton's alleged poor health, nor are they by themselves indicative of any significant health problems. The photographs were originally published in February 2016, more than five months before they started circulating on various right-wing web sites.

When Getty Images published their photograph, it was accompanied with a caption explaining that it depicted Clinton being assisted as she had just slipped while walked up stairs in South Carolina:

Although these photographs were offered as "proof" that Clinton is in such poor health that she needs constant accompaniment while ascending stairs, several photographs of the Democratic presidential nominee ascending and descending stairs without help from anyone are not difficult to find: