Hillary Clinton did not proclaim that the gorilla shot in a Cincinnati zoo was a victim of "racism." 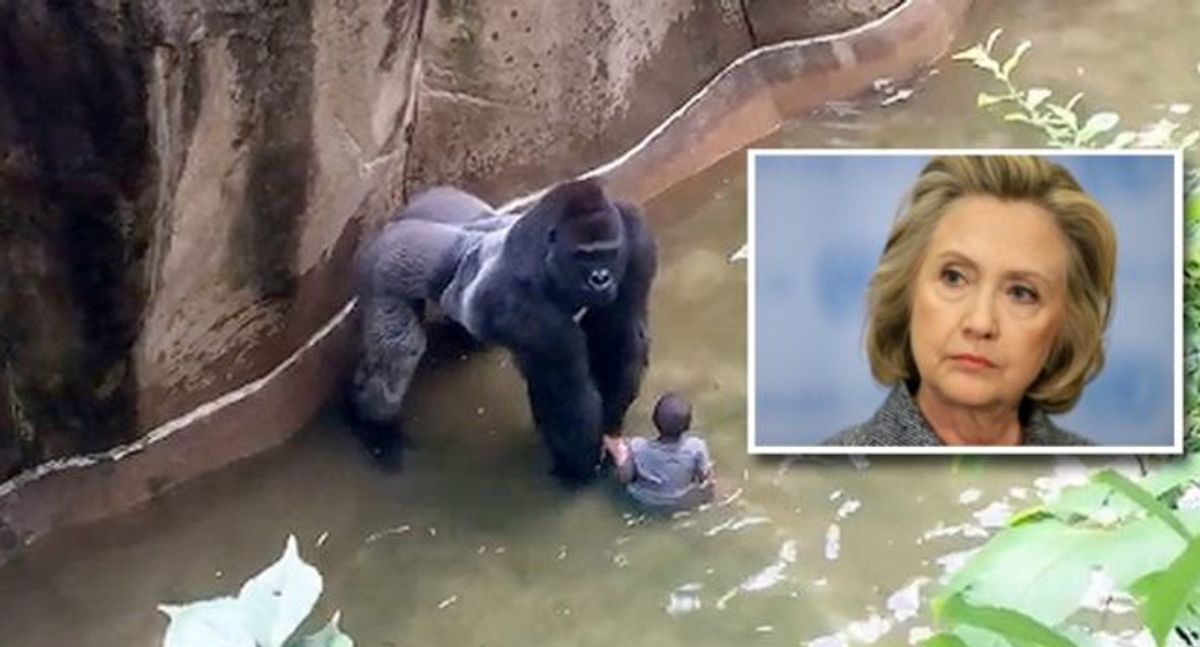 Claim:
Hillary Clinton blamed racism for the death of a gorilla in a Cincinnati zoo.
Rating:

On 2 June 2016, the Christian Times Newspaper web site published an article reporting that former secretary of state Hillary Clinton had "introduced racism" into a debate over the controversial shooting death of a gorilla named Harambe after a child fell into the ape's enclosure at a Cincinnati zoo:

On Thursday, while campaigning in California, former Secretary of State and presumptive Democratic nominee for President weighed in on the debate. After being asked for her thoughts on the situation, Hillary Clinton took the opportunity to frame the question into the larger debate over police violence and racial tension in America.

“I will tell you one thing,” Clinton said to a group of reporters. “If that gorilla was white, this situation would have ended differently. This was another senseless act of violence that spawned from prejudicial views about skin color.”

The Trump campaign has not yet responded to Clinton’s comments, but a representative from Black Lives Matter applauded what they called Clinton’s “courageous stand against injustice.”

The article circulated on Facebook, where Clinton's critics took its claim at face value. However, the Christian Times Newspaper (not to be confused with the legitimate publication The Christian Times) is a fake news site whose articles are appended with the following disclaimer:

Christian Times Newspaper is your premier online source for news, commentary, opinion, and theories. Christian Times Newspaper does not take responsibility for any of our readers' actions that may result from reading our stories. We make it abundantly aware the [sic] not all stories are necessarily grounded in fact. We do our best to provide accurate, updated news and information.

Accordingly, it is simple to conclude that the comments attributed to Clinton about the gorilla's death are not "necessarily grounded in fact." Other article headlines on the site are clearly designed to incite social media outrage-driven sharing, such as "BREAKING: Colorado GOP primary CANCELLED, Cruz awarded ALL delegates" and "BREAKING: Black Trump supporter shot and killed by Chicago protesters."