#HillarysBodyDouble took over Twitter with claims that lookalike Teresa Barnwell had appeared in New York to impersonate Hillary Clinton after the candidate left a 9/11 event following a medical incident. 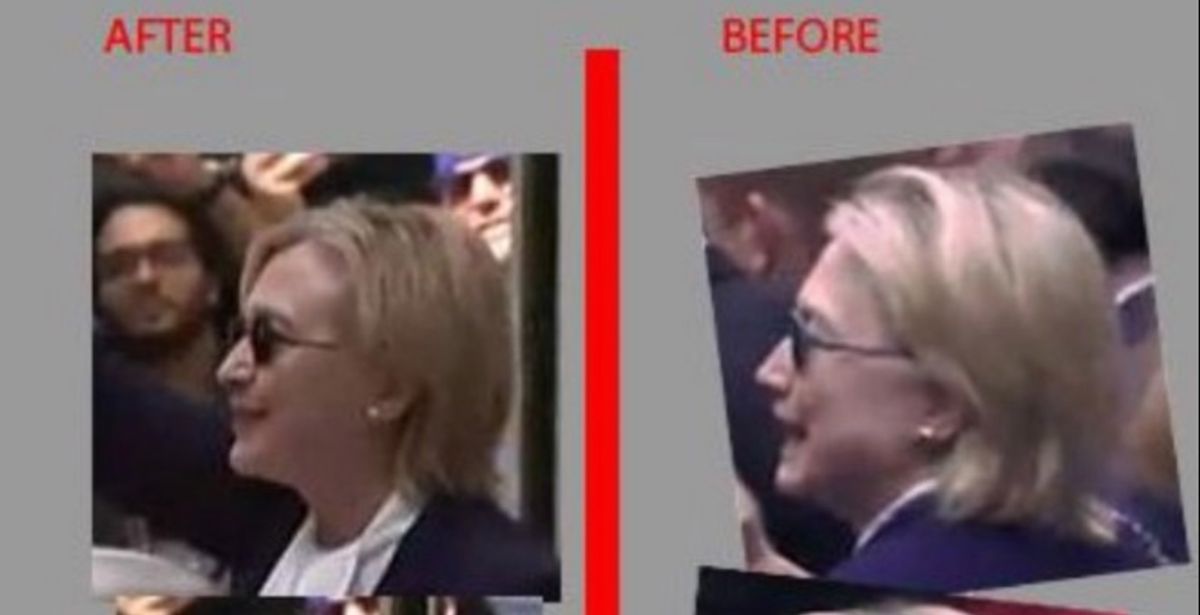 Claim:
A woman who appeared in New York after Hillary Clinton left a 9/11 memorial service for medical reasons was body double Teresa Barnwell, not Clinton herself.
Rating:

On 11 September 2016, Democratic presidential candidate Hillary Clinton made headlines for appearing unsteady on her feet before abruptly leaving a 9/11 memorial event (a phenomenon later attributed to pneumonia).

Two hours later, Clinton appeared outside daughter Chelsea Clinton's apartment, sparking rumors (along with a hashtag, #HillarysBodyDouble) that political impersonator Teresa Barnwell had "filled in" for the candidate in public later in the day to create a false appearance of renewed vigor.

The rumor took off on Twitter alongside the aforementioned hashtag, with a number of details appended to the intriguing mystery. Twitter users were confused by Clinton's seemingly vast medical improvement in the space of two hours and referenced a widely-circulated clip of a visibly recovered of the presidential candidate:

Here is Hillary Clinton leaving Chelsea's apartment. (A little girl came up to give her a hug) pic.twitter.com/VreSXmT1Yh

Even before rumors began flying about Barnwell filling in for Clinton, commenters balked at an apparent lack of Secret Service agents visibly present and an atypical amount of space around the candidate:

@ABCLiz is this a joke? Secret Service would never allow this unless it was staged. No spontaneous actions like this would happen. — Wylde Rhoads (@WyldeRhoads) September 11, 2016

Among further evidence circulating on Twitter was a screenshot from a post attributed to Barnwell about a particularly intensive gig impersonating Clinton for an event:

The referenced post was legitimate, but it was clear that Barnwell had previously appeared as a political impressionist and not as part of any attempts to trick people into believing she was genuinely Hillary Clinton.

Images circulating under the #HillarysBodyDouble hashtag contrasted earlier shots of Clinton with enhanced photographs of her second 11 September 2016 appearance:

Users contrasted footage of Clinton at the 9/11 event with photographs of Clinton taken later in the day, not with images of Barnwell specifically. Barnwell shared a photograph of herself on 11 September 2016:

Had a blast today! We were LIVE on Lip Sync Battle! Fight the power! pic.twitter.com/FcYGGeyL54 — Teresa Barnwell (@teresa_barnwell) September 12, 2016

Although Barnwell clearly kept busy impersonating Clinton for entertainment purposes, her imperfect resemblance to the former Secretary of State made the conspiracy theory less plausible. Additionally, Barnwell said that she was in Los Angeles that day, not New York City:

OK people, calm down. I was in LA today, all day. Was just messin' with your crazy conspiracy minded little heads. Go to bed. — Teresa Barnwell (@teresa_barnwell) September 12, 2016

Many speculated that a lack of Secret Service agents in view around the candidate was a clear indicator that the Clinton spotted later that day was an impostor. However, if that unprotected "Hillary Clinton" were seriously wounded or killed by an assassin, it would be impossible for the real Clinton to recover from the subterfuge and go on to win the 2016 election, so the risk of fallout from such a large cover-up would far outweigh the benefits of Clinton's faking a "body double" reappearance on 11 September 2016.

It also doesn't require a denial from Teresa Barnwell to determine she was not the woman depicted in the 11 September 2016 footage of Clinton following her early exit from a 9/11 memorial event. Whether Clinton looked the same in the two photosets is a subjective assessment, but video and photographs of the subsequent appearance reveal a woman who is clearly not Teresa Barnwell. There is no way the two women could be confused for each other, given their clear facial dissimilarities.