Will Aaron Hernandez's Family Receive $15 Million from the NFL? 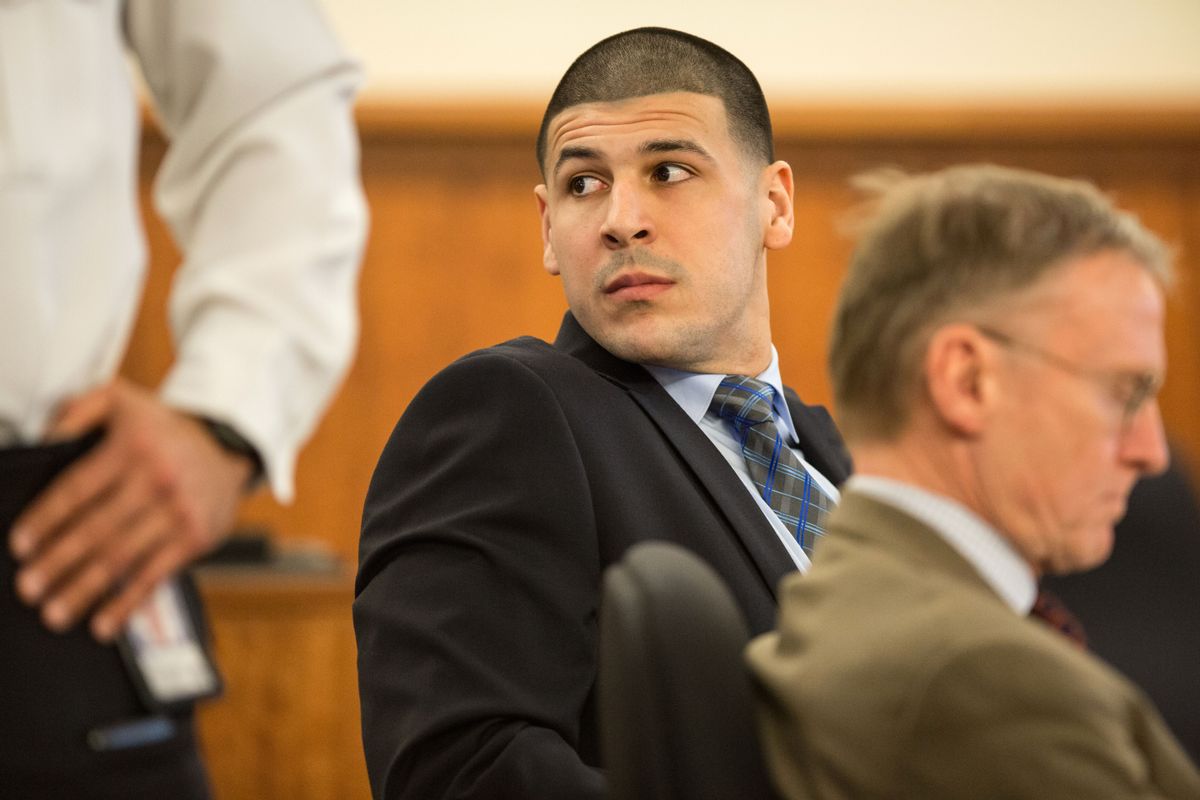 Image Via Aram Boghosian for The Boston Globe via Getty Images

Claim:
Due to an obscure Massachusetts legal doctrine, Aaron Hernandez's death vacates his conviction and entitles his family to $15 million under the terms of his severed NFL contract.
Rating:

Under the legal doctrine of abatement ab initio, Aaron Hernandez's conviction will be vacated on the basis of his death during an active appeal.

Hernandez's contract was severed in June 2013 based on his arrest and not his subsequent conviction, and it will not be reinstated by the NFL.

The death of former New England Patriots tight end Aaron Hernandez, who was found hanged in his prison cell on 19 April 2017, was followed by rumors and questions that including speculation he intended his suicide to benefit his young daughter: This speculation was followed from news reports suggesting that because Hernandez was appealing his conviction for the murder of Odin Lloyd at the time he died, under Massachusetts law that conviction could be vacated as if it had never happened:

Former NFL player Aaron Hernandez's suicide early [on 19 April 2017] ended his life and his legal saga, but according to Massachusetts law, Hernandez goes to his grave as an innocent man.

Under a legal doctrine in use in Massachusetts called abatement ab initio, if someone dies after a conviction but before the completion of their appeal, the person's legal records in that matter are wiped clean.

"It will be as if it never occurred," said Martin W. Healy, chief legal counsel for the Massachusetts Bar Association. "The indictment, the complaint, the trial, all of that, in the eyes of the law it is considered null and void."

The legal concept of abatement ab initio is both seldom invoked and not without controversy due to its potential effect on victims' families:

Healy said the idea of abatement ab initio is always controversial in those instances when it comes to light. Usually, those cases involved highly prominent trials that generate great interest in the press, he said.

Abatement ab initio is a common law dating back to English law when Massachusetts was a British colony, Healy said. Massachusetts is one of six or seven states that recognize abatement ab initio. Several states have modified it or nullified it. In each of those instances, the change was made in recognition of victims' rights, he said.

"All of this is not going to give any closure or comfort to the Lloyd family," Healy said.

Speculative online posts have stated with certainty that Hernandez's death triggered a windfall for his surviving relatives, presuming the NFL star would once again be entitled to a considerable fortune from his football career, but legal analysts and extant case law paint a muddier picture. They say an argument could be made disputing the severance of a contract based upon an arrest for an overturned or vacated conviction, but not that such a lawsuit would necessarily be successful:

For example, [Healy] said, with a "creative lawyer," the family could file litigation against the Patriots and the NFL for voiding Hernandez' contract after his indictment.

However, the Boston Globe disputed that achieving such an outcome was feasible:

Even without a conviction on the books, Hernandez almost certainly was in breach of his contract.

When Hernandez was arrested for Lloyd’s murder in June 2013, the Patriots released him and refused to pay the remaining guaranteed money — a $3.25 million deferred signing bonus payment, and base salaries of $1.323 million and $1.137 million. They also declined to pay a $82,000 workout bonus that he had earned in June 2013.

Hernandez lost his grievance, and his contract would likely prevent him from collecting any of the money now, despite the lack of a conviction on his record.

Even though Hernandez was found not guilty of the 2012 double murder, the Patriots can reasonably argue that Hernandez didn’t represent his reckless behavior during that time, and that when he signed the contract he was headed down the path of incarceration and unavailability.

In June 2013, NFL.com reported that Hernandez's contract guarantees had been revoked, a decision the NFL based on his arrest and his conduct subsequent to that arrest, not his later conviction. In other words, had Hernandez not been convicted in the murder of Odin Lloyd, that circumstance would have had no bearing on the NFL's June 2013 decision:

The New England Patriots have voided all of Aaron Hernandez's contract guarantees ... meaning the former tight end will have to fight to receive even the portion of his signing bonus that he's already earned.

Hernandez was to receive $2.5 million in guaranteed base salaries over the next two seasons, and his contract does not have language to void that money if he fails to practice. However, the Patriots believe the Collective Bargaining Agreement covers them because he has engaged in conduct unbecoming after being arrested and charged with first-degree murder in the death of Odin Lloyd.

As for his $3.25 million in signing bonus payment that was to be paid this March, that's a deferred payment that Hernandez already earned after signing his five-year, $40 million contract last year. The Patriots appear to have a serious uphill battle to avoid paying this, but they seem set on making Hernandez fight for this portion of his fully guaranteed signing bonus.

Speculation holds that if Hernandez's conviction were vacated it would posthumously restore his standing with the NFL, thereby entitling his next of kin to the wealth he would have accumulated if he had never been convicted. But that speculation presumes that since the legal doctrine triggered by Hernandez's suicide could vacate his conviction, the NFL would somehow be bound by that outcome to pay out the contract's promises to his family. However, the NFL is a business entity and not a court of law, and Hernandez's contract was voided 90 minutes after his arrest based on "conduct unbecoming," not on his conviction.

Abatement ab initio may possibly clear Hernandez's name in a technical sense, but legal experts say only that a "creative lawyer" could initiate litigation based on that concept, not that the outcome of such litigation is automatic or certain. The legal concept of abatement ab initio is controversial when invoked in high-profile cases like this one because it often serves to protect the existing assets of an appellant's estate, and no provision of the law mandates that the NFL must reinstate Hernandez's contract terms on the basis of his death.

UPDATE: Henandez' conviction was erased by a Massachusetts judge in May 2017. It was later reinstated in March 2019 with the Associated Press reporting:

Updated with information on the March 2019 ruling.