Right-leaning websites jumped into action after Biden announced Harris as his vice-presidential running mate in August 2020. 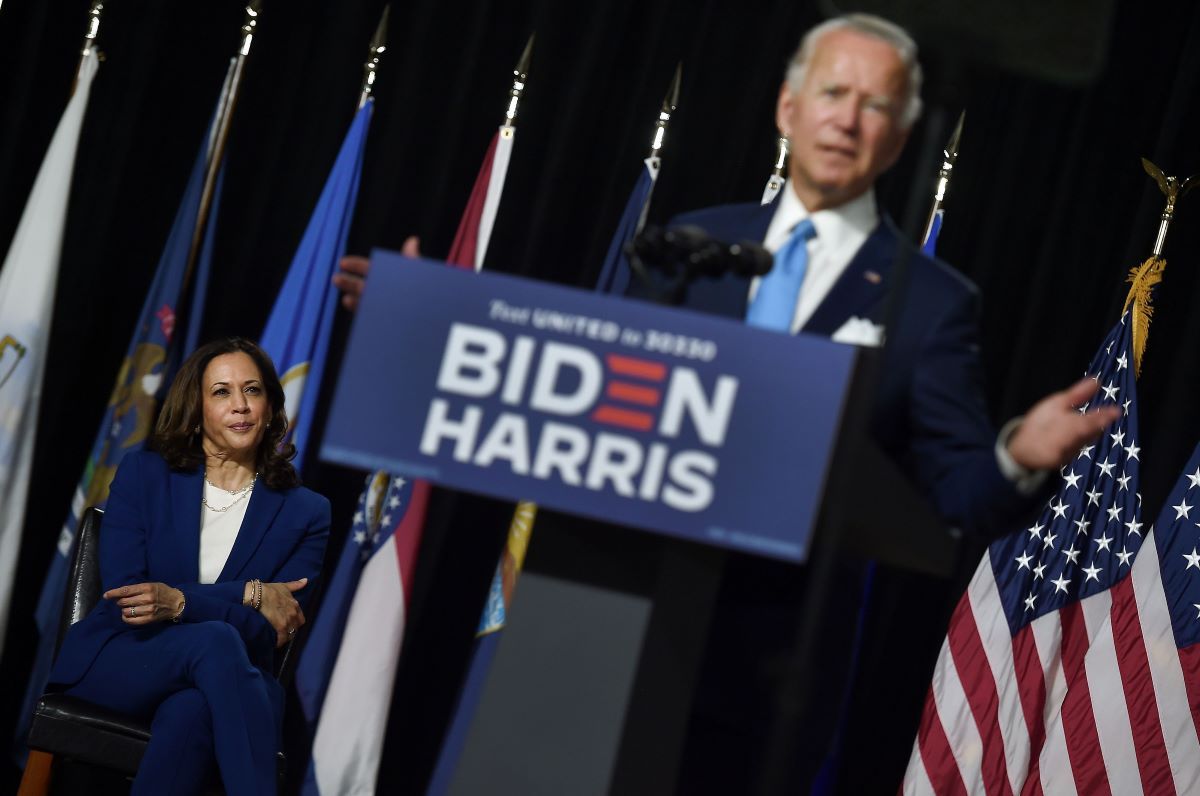 On April 2, 2019, Harris said "I believe them," in reference to four women who had by then accused Biden of inappropriate touching.

Harris has not said that she believes all of Biden's accusers, in particular Tara Reade, who, almost one year after Harris' remarks, accused Biden of raping her. When questioned about Reade's allegations, Harris did not say that she believed them.

In August 2020, readers asked Snopes to examine the accuracy of news articles that claimed that U.S. Sen. Kamala Harris, D-Calif., had once said she "believed" women who accused former Vice President Joe Biden of offenses ranging from inappropriate touching to rape.

Fox News published an article on their website with the headline, "Flashback: Kamala Harris Said She Believed Women Who Accused Biden of Inappropriate Touching," writing that:

"Sen. Kamala Harris, who was announced as presumptive Democratic nominee Joe Biden’s running mate on Tuesday, once said that she believed women who accused Biden of inappropriate touching.

"'I believe them, and I respect them being able to tell their story and having the courage to do it,' the California senator told reporters in April 2019. Biden had been accused by a number of women of inappropriate touching and kissing, including by a Nevada politician who said he came up behind her at a 2014 campaign stop and kissed her on the back of her head."

Fox News specified, in its headline and article, that the allegations that Harris said she believed related to inappropriate touching, but other outlets were less specific. The Blaze, for example, published an article with the headline "Flashback: VP Pick Sen. Kamala Harris: I 'Believe' Biden Accusers" — a formula of words which could have given readers the mistaken impression that Harris had said she believed each and every woman to have accused the former vice president of various offenses.

For its part, The Federalist falsely claimed that Harris had said she believed "Biden's rape accusers." But in reality, there were not multiple accusers. Only one woman, Tara Reade, has accused Biden of rape, and Harris said "I believe them" nearly a year before Reade first publicly made that particular allegation, which Biden has vehemently denied. When asked about Reade's accusation, Harris did not say she believed it, and issued a firm defense of Biden's record on violence against women and women's rights.

Harris did say that she believed women who had come forward to claim that Biden had touched them inappropriately. At an event in Carson City, Nevada, on April 2, 2019, a reporter asked Harris the following question:

"As somebody who has a relationship with Vice President Biden, what message would you give the women who feel like their space has been invaded in the past, by the vice president?"

Harris replied: "I believe them, and I respect them being able to tell their story and having the courage to do it."

The exchange can be watched in full, here.

At that time, four women had publicly accused Biden of inappropriately touching them. On March 29, 2019, Lucy Flores, a former Democratic candidate for Lieutenant Governor of Nevada, wrote that in 2014, the then-vice president had put his hands on her shoulders, smelled her hair and kissed her on her head.

On April 1, 2019, Amy Lappos, a former aide to U.S. Rep. Jim Himes, D-Conn., said that at a fundraiser in 2009, Biden had "put his hand around [her] neck and pulled [her] in to rub noses with [her]." In an earlier Facebook post, Lappos said the experience had made her feel "incredibly uncomfortable."

"In my many years on the campaign trail and in public life, I have offered countless handshakes, hugs, expressions of affection, support and comfort. And not once — never — did I believe I acted inappropriately. If it is suggested I did so, I will listen respectfully. But it was never my intention. I may not recall these moments the same way, and I may be surprised at what I hear. But we have arrived at an important time when women feel they can and should relate their experiences, and men should pay attention. And I will..."

Caitlyn Caruso, who works for a non-profit organization focused on sexual health information and service for young people, said Biden rested his hand on her thigh, even though she "squirmed" in discomfort, and hugged her so long that it made her feel uncomfortable, during an event at the University of Nevada-Las Vegas at which she had publicly shared her own experience of sexual assault. D.J. Hill told the Times that while she and her husband posed for a photograph with Biden in 2012, the vice president put his hand on her shoulder and moved it down her back. Hill said she did not know what Biden's intentions were, but that his actions made her "very uncomfortable."

Flores and Lappos have both explicitly stated that although Biden's touching was unwanted, unacceptable, and made them feel uncomfortable, they did not perceive it as being sexual in nature. Neither Caruso nor Hill described Biden's actions towards them as sexual assault.

On April 3, 2019, Biden released a video on Twitter in which he acknowledged that his characteristic habit of making unsolicited physical contact with others, including strangers — something he called "gestures of support and encouragement" — had made some women and men "uncomfortable," over the years, adding that:

"The boundaries of protecting personal space have been reset, and I get it... I'll always believe governing, quite frankly, life for that matter, is about connecting...with people. That won't change, but I will be more mindful and respectful of people's personal space."

After Harris made the remarks in question on April 2, 2019, three more women publicly accused Biden of having touched them inappropriately, made them uncomfortable, or made inappropriate remarks about their physical appearance.

A fourth woman, Tara Reade, alleged in March 2020 that Biden sexually assaulted her at an office in the U.S. Capitol, providing descriptions that some readers might find disturbing. Reade said that when she worked in his U.S. Senate office in 1993, Biden pushed her against a wall, subjected her to unwanted kissing, and digitally penetrated her. (Although Reade did not herself use the word "rape" to describe the latter allegation, digital penetration without consent is included in the definition of rape used by the Federal Bureau of Investigation in its Uniform Crime Report. In that context, it is reasonable to state that Reade accused Biden of raping her).

While Harris said plainly "I believe them" about those women who had, before April 2, 2019, accused Biden of inappropriate touching, the senator has not said the same about Reade's rape allegation, and did not do so when asked about it. Speaking to the San Francisco Chronicle's "It's All Political" podcast, in April 2020, Harris said Reade had a right to be heard, and should face no repercussions for "telling her story," but defended Biden's record as "somebody who really has fought for women and empowerment of women and women's equality and rights":

This woman has a right to tell her story, and I believe that, and I believe Joe Biden believes that too. I've spent my whole career...fighting to give women a voice, and this brings up, I think, a bigger structural issue, frankly, which is that women must be able to speak without fear of retaliation...On the issue of Joe, I can only speak to the Joe Biden I know. He's been a life-long fighter in terms of stopping violence against women. He has been the leader, I think really most people would agree, in the United States Senate on VAWA, the Violence Against Women Act.

So, you know, as I said, she has a right to tell her story, and she shouldn't face any repercussions for that. But the Joe Biden I know is somebody who really has fought for women and empowerment of women and women's equality and rights.