Did This Happen 'While Your TV Was Filled with Riots and Looting'? 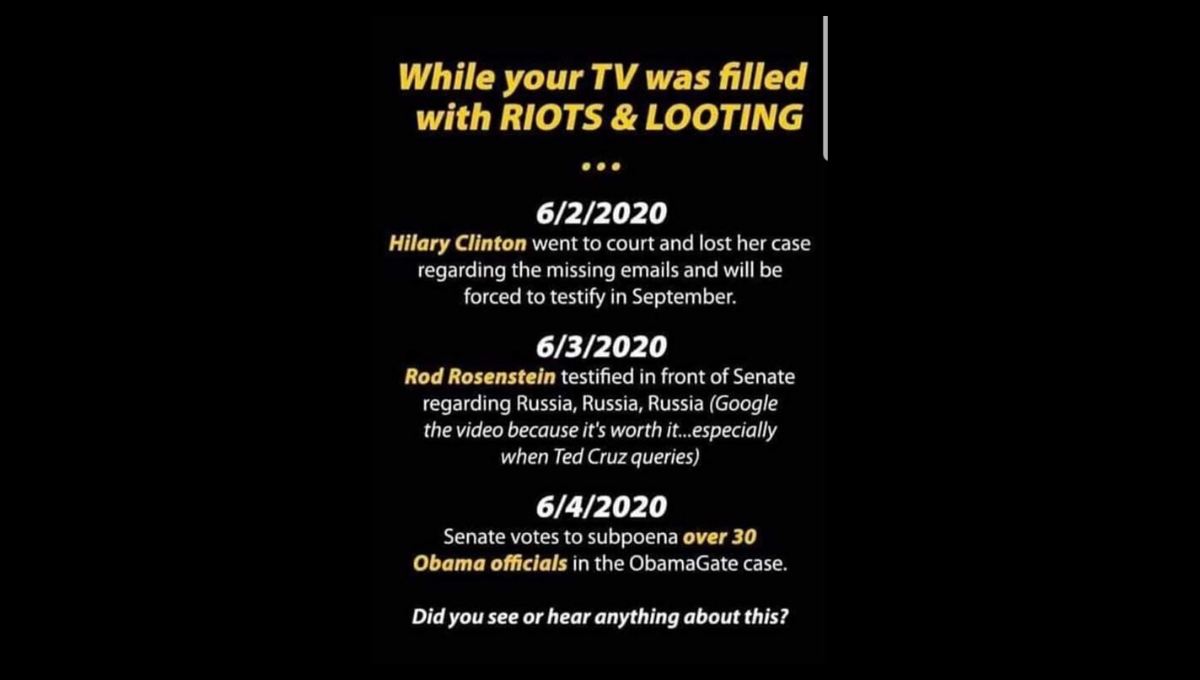 Claim:
A meme lists political legal events that occurred during the first week of June 2020, while nationwide protests were taking place over the death of George Floyd.
Rating:

A meme that hit social media in June 2020 purported to identify three political legal events, which many Americans were likely unfamiliar with, that occurred during the first week of June 2020. That period marked a time of nationwide protests over the police in-custody death of an unarmed Black man, George Floyd, in Minneapolis: We can't determine with any accuracy what proportion of the U.S. population was aware of the referenced proceedings. But they didn't garner nearly as much prominent news coverage as other events, and for the most part they did take place as described in the meme — with some exceptions in the details of the first entry. To wit:

Although Hillary Clinton didn't actually appear in court (or otherwise testify) on June 2, 2020, a hearing was held that day about a rather complex issue of whether the former U.S. secretary of state should have submit to a deposition in a case brought by a third party involving the Freedom of Information Act (FOIA):

The hearing in the D.C. Circuit comes in the case Judicial Watch v. Clinton, a public-records case involving a request for State Department documents and communication about the 2012 terror attack at the U.S. mission in Benghazi, Libya. U.S. Ambassador J. Christopher Stevens was killed in the attack.

The Benghazi attack and Clinton’s use of a private email server as secretary of state have long been flash points for Republicans on Capitol Hill, and Clinton’s email practices were the centerpiece of an FBI investigation -- in the months leading up to the 2016 presidential election -- about her handling of classified information.

Clinton’s lawyers are challenging a March 2 order from U.S. District Judge Royce Lamberth, who said Clinton’s written responses in the public-records litigation to questions about her email practices “were either incomplete, unhelpful, or cursory at best. Simply put, her responses left many more questions than answers.”

Williams & Connolly partner David Kendall, lead counsel for Clinton, has argued she has broadly addressed her private email before Congress, the FBI and news reporters, and therefore she has nothing more to say.

“The Benghazi Select Committee, the State Department Inspector General, and the FBI all conducted inquiries and made findings on her use of private email,” Kendall wrote in Clinton’s D.C. Circuit filing in March. Clinton has testified under oath that she used private email for convenience, her lawyers said in court filings.

Depositions of current or former cabinet officials are rare, and plaintiffs face a high burden to prove that “extraordinary circumstances” compel such testimony. The Justice Department has long resisted efforts to depose high-ranking officials. DOJ, however, is not backing Clinton in her appeal in the D.C. Circuit. The government has said the deposition would not touch on official policy but compliance with FOIA.

The arguments in that hearing ran for an hour and a half on June 2, and (as far as we know) the court has not issued its ruling yet, so it is not accurate to say that Clinton "lost her case" and "will be forced to testify in September." That claim seems to be based on the original court order of March 2 that was being contested at the June 2 hearing:

Former Deputy U.S. Attorney General Rod Rosenstein did testify before the Senate Judiciary Committee on June 3, 2020. Whether his testimony was of more interest (or potential harm) to Republicans or Democrats is debatable:

[O]n June 3 the Senate Judiciary Committee convened to discuss the pressing issues of the day: the origins of the Russia investigation, the text messages between Peter Strzok and Lisa Page, and the Steele dossier -- with former Deputy Attorney General Rod Rosenstein as a witness.

For years, it was Democrats who wanted to talk about Russia. Not any more. Democrats these days would be happy never to hold another hearing on the subject. Whether because they believe the truth has been exposed to the degree it ever will be or because they believe they have garnered from the subject all the political benefit they are going to get from it, they are generally happy to let the Mueller report and the fallout from it be the final word on the subject. For Republicans, however, and for the president in particular, talking about the Russia investigation is like listening to golden oldies. It rallies the base. It keeps people mad at super-villains well drawn. The occasional hearing at which to denounce James Comey and all his works is like comfort food.

But it’s comfort food of a peculiar variety.

Because whoever you are and whatever political persuasion you bring to the table, the food has some embarrassing ingredients. For Republicans, there’s the small matter that their central narrative is untrue. There was no coup. There was no political spying on a campaign. There was no corruption of the FBI. No amalgamation of the very real errors that took place in the Russia probe will support the only story Republicans want to tell about it.

And bringing Rosenstein to testify actually highlights some of the difficulties with the basic Republican thesis. As countless senators pointed out, after all, it was he -- a Trump appointee -- who signed the last of the Carter Page FISA applications. And it was his decision to appoint Special Counsel Robert Mueller. It was Rosenstein -- not Comey or FBI Deputy Director Andrew McCabe -- who offered to wear a wire in conversations with the president. If you’re trying to uncover a deep-state conspiracy, Rosenstein is a tricky figure to have as your witness.

For those interested in watching it, Sen. Ted Cruz's queries to Rosenstein begin around the 1:30:00 mark in the following video:

A U.S. Senate committee (not the full Senate) did vote on June 4 to authorize subpoenas of some 35 government officials who served during the Obama administration in connection with a probe involving allegations of collusion between the Trump campaign and the Russian government (now derisively referred to as "Obamagate"):

[A] Senate committee gathered [June 4] with a singular focus on the Obama administration, authorizing 35 subpoenas into the origins of the FBI’s Russia investigation.

“It is our job to investigate and provide the American people a complete accounting of what happened during the last transition,” said Senator Ron Johnson, a Republican who chairs the Senate Homeland Security Committee. “The subpoena authority I am requesting today will help us gather the necessary information.”

The FBI investigation dubbed Crossfire Hurricane probed allegations of collusion between the Trump campaign and the Russian government.

In addition to subpoenaing documents and testimony related to that probe, Johnson, who hails from Wisconsin, will also have authority to issue subpoenas for information on the unmasking of incoming Trump administration officials during the transition.