Is a Deceased Pope Tapped with a Silver Hammer to Verify He's Dead?

Legend holds that part of the process of determining that a pope has died is to call for him to be tapped on the forehead with a silver hammer. 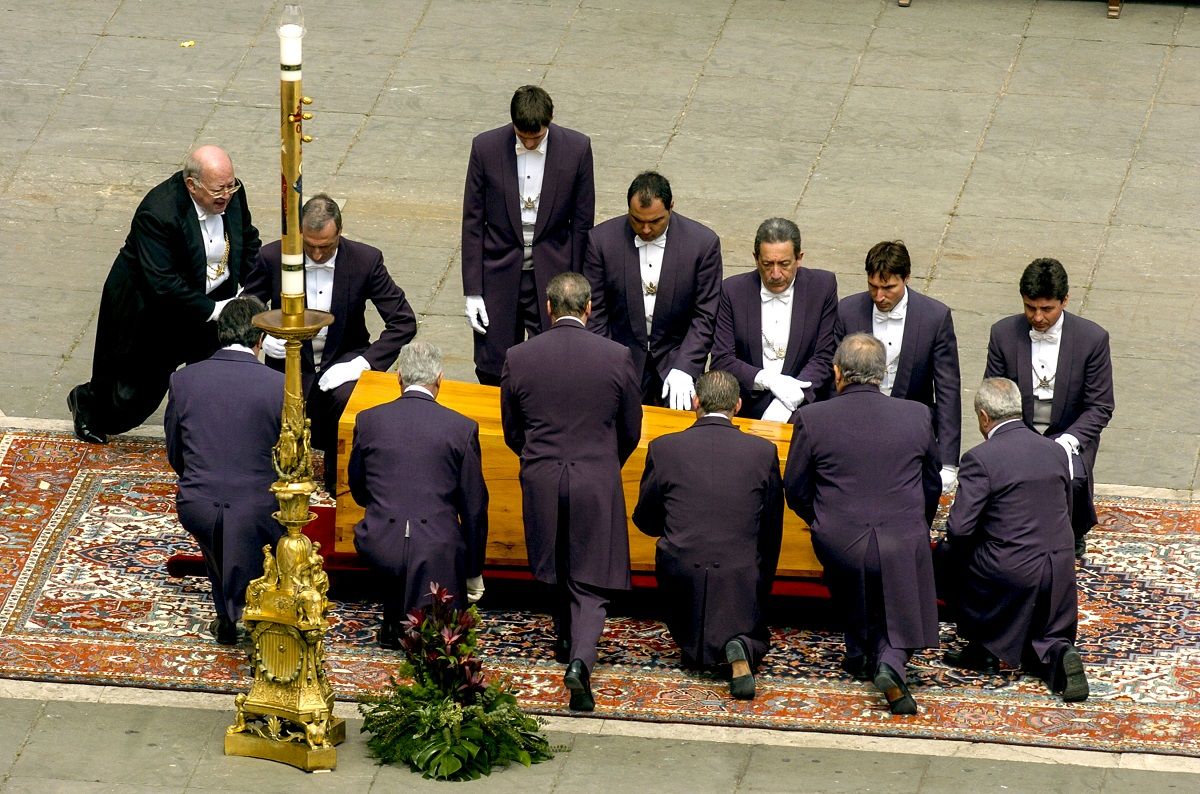 Claim:
Part of the process of determining that a Pope has died and is not merely sleeping calls for him to be tapped on the forehead with a silver hammer.
Rating:

The Vatican customs surrounding the passing of a Pope and the election of his successor seem mysterious to outsiders, both because of their arcane nature and because members of the general population gain exposure to them only at those rare instance in their own lifetimes when the Pontiff dies. Consequently, just about any act said to be part of those rituals seems somewhat believable. One particularly odd belief asserts that after the Bishop of Rome passes on, he is struck in the head with a silver hammer to confirm that he is well and truly gone and not merely sleeping soundly:

My son came home last night, and told me that when the Pope passes away, to ensure his death, he is struck on the head with a silver or gold hammer three times.

Is it true that when a pope dies, they perform a ritual where someone strikes his head with a silver hammer? Some say it's an old practice that has been abolished and others say that they still do it.

Disagreement exists as to whether such a procedure is part of the parting process. We do know that once a Pope appears to have left this world, a pronouncement is made in Latin that he is dead, with this news certified by a physician. The camerlengo (chamberlain) calls out the pontiff's baptismal name three times over the corpse in an effort to prompt a response. Failing to get one, he defaces with a silver hammer that particular Bishop of Rome's Pescatorio (Ring of the Fisherman), along with the dies used to make lead seals for apostolic letters. The pope's quarters are then sealed, and funeral arrangements are begun by the camerlengo.

Some believe after the deceased has failed to answer to his name being called three times, and before his ring and seals are defaced, he is tapped on the forehead with a small silver hammer. That intelligence has been sped along by Stephen Bates, a journalist who penned a widely quoted-from article on rituals attaching to the passing of Popes.

For instance, in 2003 The Guardian quoted Bates thus:

After the pope dies, an event confirmed when a senior member of staff strikes him on the forehead with a silver hammer and calls his baptismal name to make sure he is not just asleep, the cardinals will gather within a fortnight in the Vatican to deliberate in great secrecy on the choice of his successor.

Yet The Guardian ran the following correction a few weeks later:

The article below included the assertion that the corpse of a Pope is ritually struck on the head with a silver hammer to ascertain that there is no sign of life. According to the Vatican, this is a myth.

While many news outlets continue to tout the silver hammer information as factual (which further adds to the confusion, as the resulting proliferation of articles appears to add credence to the claim, even though all such articles spring from the same wellhead), some offer counter information, such as this snippet gleaned from a 2005 Associated Press report:

As for the silver hammer, it was indeed used to verify the pope's death, for centuries, until the practice ended with reforms of the Second Vatican Council in the 1960s.

But the camerlengo is still thought to use a silver mallet to destroy the papal ring and seals, symbolizing the end of the dead pope's reign. Symbolism aside, though, the act provides a safeguard against forgeries.

It is not inconceivable that at least at one time such a macabre test was administered, because history is dotted with numerous instances of those presumed to have passed away suddenly springing back to life. At one time, the fear of being misdiagnosed as dead and consequently being buried alive prompted some to specify in their wills their desire to have special tests performed on their bodies to make some sure they were actually deceased.

Surgical incisions, the application of boiling hot liquids, touching red-hot irons to their flesh, stabbing them through the heart, or even decapitating them were all specified at different times as a way of making sure the presumably deceased didn't wake up six feet under. Some persons opted for being buried with the means to do themselves in, and guns, knives, and poison were sometimes packed into coffins along with the deceased. (These days, given western society's passion for embalming its departed loved ones, the chances of being prematurely buried are almost nil, because none so preserved stand a chance of surviving the process.)

In the wake of the death of Pope John Paul II on 2 April 2005, news outlets and other sources have issued a variety of contradictory statements about the use of a silver hammer in connection with a pope's death: it's an old, discontinued practice, or it remains a current practice; the use of the hammer once served a functional purpose, or its use is (and always has been) purely symbolic. In light of these competing claims, we await a pronouncement from an identifiable (i.e., non-anonymous) Vatican official on the subject before declaring this one either 'True' or 'False.'

One final note for those who are pondering the coincidence: the Beatles song "Maxwell's Silver Hammer" has no connection to papal traditions involving a silver hammer. As Steve Turner noted in A Hard Day's Write, his volume on the origins of Beatles songs:

"John told me that 'Maxwell's Silver Hammer' was about the law of karma," says former Apple employee Tony King. "We were talking one day about 'Instant Karma' because something happened where he'd been clobbered and he'd said that this was an example of instant karma. I asked him whether he believed in that theory. He said that he did and that 'Maxwell's Silver Hammer' was the first song that they'd made about that. He said that the idea behind the song was that the minute you do something that's not right, Maxwell's silver hammer will come down on your head."

Paul said at the time that the song "epitomizes the downfalls of life. Just when everything is going smoothly, 'bang, bang' down comes Maxwell's silver hammer and ruins everything."