Is There a Dedicated Hall & Oates Phone Line? 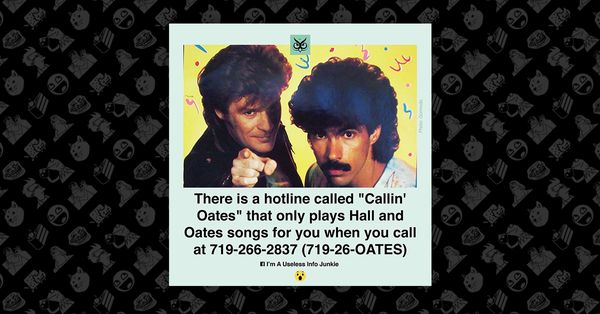 Claim:
Dialing a Colorado Springs-area phone number allows you to listen to one of four Hall & Oates songs.
Rating:

In an era of scams, phishing alerts and viral hoaxes, it's understandable that some have been skeptical about the existence of a 24-hour telephone hotline that does nothing but play Hall & Oates songs. It's all true. You can try it for yourself (depending on your phone plan, you might get charged) or just watch the video that we recorded.  An automated female voice intones:

"Callin' Oates" is the creation of San Francisco-based friends Reid Butler — a product manager at Cisco — and Michael Selvidge, who was given the assignment of creating an app as part of his employment at the cloud communications company Twilio.

The hotline was launched in December 2011. Technology news site The Verge reported at the time:

Selvidge, who formerly worked PR part time for Twilio before coming on as a full time employee, knew that he'd have to build something, but lacked an idea. He told me, "I thought, 'If only there was a pun that would work with this...' Then 'Callin' Oates' hit me, and that cinched it."

With the idea secure, Selvidge and Butler built and launched the hotline this weekend, mixing a bit of PHP and links to public URLs on Dropbox to create a simple interactive voice response system. The custom 1-719-26-OATES number costs $1 / month, and Selvidge found it via an online phrase search.

According to Selvidge, the Colorado Springs-area phone number was receiving an average of around 2,000 calls each day as of November 2017.