Was a Human-Lamb Hybrid Born in South Africa?

Many rumors about strange creatures like cyclops or human-animal hybrids, can be traced back to one sad but common occurrence: an animal with a birth defect. 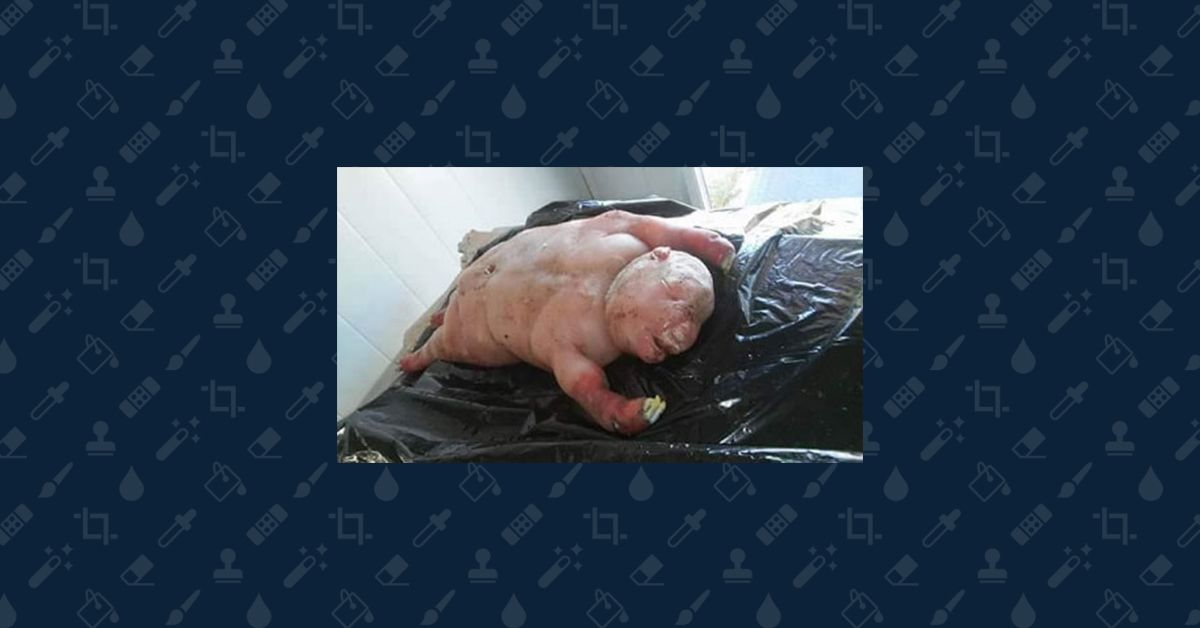 Claim:
A half-human, half-lamb was born in South Africa.
Rating:

Many rumors about strange creatures like cyclops or human-animal hybrids, can be traced back to one sad but common occurrence: An animal with a birth defect. That was the case in June 2017 when a series of photographs showing a deformed lamb appeared on social media with sensational (and sometimes nonsensical) titles like "Alleged sheep gives birth to a human lamb" and "'Half-human' lamb in South Africa terrifies both locals and the internet": The lamb in this photograph was born dead in the Eastern Cape of South Africa near the Lady Frere area. Although locals were surprised by the animal's appearance and reportedly worried that it was the result of bestiality, the Eastern Cape Department of Rural Development and Agrarian Reform confirmed to local media that these photographs simply showed a deformed stillborn lamb. Dr Lubabalo Mrwebi the department’s Chief Director of Veterinary Services said it was not uncommon for pregnant animals to be infected by viruses early in their pregnancy.

“Virus infections in early stages of pregnancy may infect the foetus and lead to the development of malformations in the growing foetus. It is likely that this is what happened to the Lady Frere sheep‚” Mrwebi said.

Mrwebi also explained that it was impossible for bestiality to result in some sort of human-hybrid creature:

"It is worth noting that a sheep has 28 pairs of chromosomes; a goat has 30 pairs; while humans have 23 pairs. These facts are important in dispelling the myth that a union of a sheep ovum and a human sperm can lead to a development of a viable life form. The deformed lamb exhibits signs that are consistent with an early foetal development that went wrong as a result of a viral infection."

This isn't the first rumor about a half-human hybrid. We've previously debunked rumors about human-dogs (actually a sculpture), human-gorillas (actually a doctored image), and human-goats (actually a deformed goat). But bestiality does not produce human-animal hybrids:

Could we mate with other animals today?

Probably not. Ethical considerations preclude definitive research on the subject, but it's safe to say that human DNA has become so different from that of other animals that interbreeding would likely be impossible. Groups of organisms tend to drift apart genetically when they get separated by geographical barriers—one might leave to find new food sources, or an earthquake could force them apart. When the two groups come back into contact with each other many, many years later, they may each have evolved to the point where they can no longer mate.

In general, two types of changes prevent animals from interbreeding. The first includes all those factors—called "pre-zygotic reproductive isolating mechanisms"—that would make fertilization impossible. After so many generations apart, a pair of animals might look so different from one another that they're not inclined to have sex. If the animals do try to get it on despite changed appearances, incompatible genitalia or sperm motility could pose another problem: A human spermatozoon may not be equipped to navigate the reproductive tract of a chimpanzee, for example.

The second type of barrier includes "post-zygotic reproductive isolating mechanisms," or those factors that would make it impossible for a hybrid animal fetus to grow into a reproductive adult. If a human were indeed inclined and able to impregnate a monkey, post-zygotic mechanisms might result in a miscarriage or sterile offspring. The further apart two animals are in genetic terms, the less likely they are to produce viable offspring. At this point, humans seem to have been separate from other animals for far too long to interbreed. We diverged from our closest extant relative, the chimpanzee, as many as 7 million years ago. (For comparison, our apparent tryst with the Neanderthals occurred less than 700,000 years after we split off from them.)