Did Gun Violence Kill More People in U.S. in 9 Weeks than U.S. Combatants Died in D-Day?

The Washington Post prompted inquiries from readers with their stark statistical comparison. 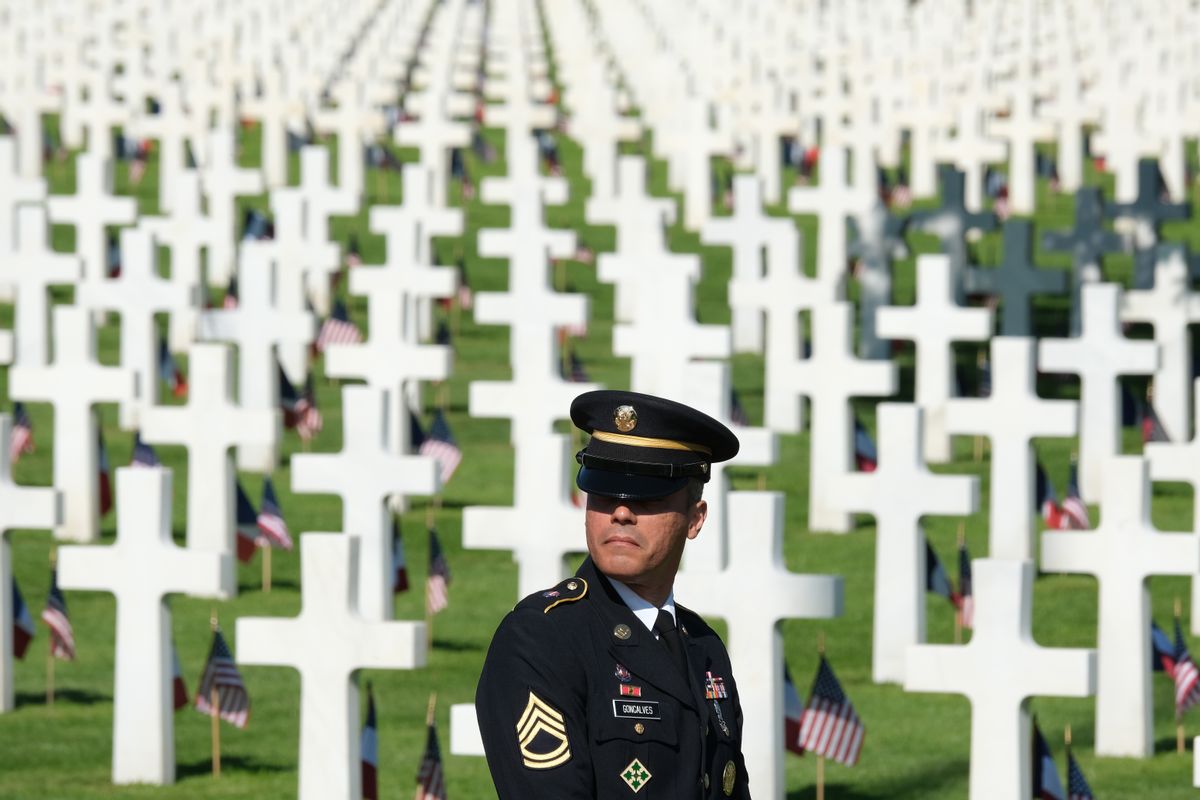 Claim:
By 6 March, the number of gun-related deaths in the U.S. in 2019 had surpassed the total number of U.S. combatant deaths on D-Day.
Rating:

According to a reliable database of U.S. gun violence, 2,487 gun-related deaths took place between 1 January and 6 March 2019 , a number very close to the 2,501 U.S. combatants known to have died in D-Day.

According to our analysis of reliable U.S. gun violence data, the number of gun-related deaths in 2019 passed the threshold of 2,501 on 7 March, rather than 6 March. The figure of 2,501 U.S. combatant deaths in D-Day is an estimate which, despite being the most reliable available, should not be regarded as definitive or final.

The 75th anniversary of the D-Day landings in June 2019 was accompanied by widespread commemoration and news coverage, including one interesting take on the scale of the loss of life that took place during the Allied invasion of Normandy, a turning point in World War II, on 6 June 1944.

The Washington Post published an analysis with the headline "More Americans Were Shot to Death by March 6 This Year Than Died on D-Day," which reported that:

A 19-year-old in Delaware, a 25-year-old in Columbus, Ohio, a 33-year-old in California, and a 64-year-old in Indiana. They are among the 29 people fatally shot in the United States on March 6. Meaning that any one of them might have been the shooting death that pushed the year’s total past the number of deaths suffered by American forces during the invasion of Normandy on June 6, 1944 ...

Some 2,501 Americans gave their lives that day, according to historic estimates. Another 1,913 soldiers from other Allied countries also died, bringing the total death toll from the immediate invasion to 4,414. It took until late April before the number of people killed by guns in the United States in 2019 topped that number, according to data collected by the Gun Violence Archive. (This data excludes suicides.)

The article prompted multiple inquiries from Snopes readers about the accuracy of the claim that gun violence had claimed more lives in the United States between 1 January and 6 March 2019 than the full U.S. death toll from the initial D-Day landings.

The Post's analysis was highly accurate in presenting the data collected by a reliable source of gun violence data, and in fact will likely end up being a significant understatement of the true extent of gun deaths in the first few months of 2019, because comprehensive figures for gun-related suicides (the leading cause of gun deaths) are not yet available. The Post accurately presented the most reliable figures available for U.S. combatant deaths in D-Day, but those figures may also be an understatement of the true extent of D-Day fatalities, because they are estimates rather than definitive and final totals.

According to the National D-Day Memorial Foundation, at least 4,414 Allied combatants died as part of the Normandy landings: 2,501 U.S. forces and 1,913 from seven other Allied countries. The Foundation provided Snopes with the following breakdown of known fatalities:

Even after 75 years, these figures are not exhaustive, and the death toll of 4,414 should not be regarded as complete. (For example, the total passed from 4,413 to 4,414 as recently as 27 May 2019, the Foundation's Director of Education John Long told us, when Sgt. John Onken of Peotone, Idaho, was officially added to the tally).

The figure of 4,414 does not include soldiers who, for example, died on 7 June 1944, having been injured during the fighting on D-Day itself the previous day. Long explained to us that, "The standards set at the beginning for inclusion was a confirmed death date of 6/6/44 in or near Normandy in a military record. The problem that soon became evident is that military-death dates were often guess work. If a body washed ashore on June 13 or a paratrooper was found hanging in a tree, the record might reflect the date the remains were recovered, since exact time of death would be impossible to determine."

The actual Allied D-Day death toll could well be higher than the 4,414 combatants who are known to have perished during the events of 6 June 1944, and any statistical comparison involving that figure should be viewed with that disclaimer in mind. For his part, Long declined to give even a rough estimate of what the full death toll might be, adding "As it says on the Tomb of the Unknowns, the full list is 'Known but to God.'"

Notwithstanding those important disclaimers, the Post did accurately present, in its analysis, the most reliable figures available for known and recorded Allied and U.S. combatant deaths on D-Day.

The Post article's headline claimed "More Americans Were Shot to Death by March 6 This Year Than Died on D-Day." The use of the word "Americans" might suggest that their analysis of the data took into account the nationality of the victims of gun violence. Instead, this somewhat unhelpful phrasing obscured the fact that the analysis actually related to what the body of the article itself described as "people fatally shot in the United States," regardless of whether they were U.S. citizens.

As its source, the Post cited the Gun Violence Archive (GVA), a robust, reliable, non-partisan source of data on gun violence. According to our analysis of GVA data, 2,487 gun-related deaths took place in the U.S. between 1 January and 6 March 2019.

That's very slightly short of 2,501 — the number of U.S. combatants known to have been killed on D-Day — but only by about half of one percent. By our count, that milestone was passed on 7 March, the next day.

Although the Post stated that the GVA data "excludes suicides," that's not quite right. GVA's website explains that the project's staff only publishes aggregate figures for gun-related suicides at the end of each year, but that the daily updates do include self-inflicted fatal gun violence if it comes in the context of a murder-suicide or an officer-involved incident. If one does completely exclude suicides from the data, then the total number of gun deaths between 1 January and 6 March was 2,373, with the D-Day milestone of 2,501 being surpassed on 10 March, just a few days later.

However, because the GVA's full tally of gun-related suicides will only become clear at the end of 2019, and because we know that the majority of gun deaths are suicides, the full death toll from gun violence in the U.S. is likely to have far surpassed the D-Day milestone of 2,501 significantly before 6 March 2019. This would provide even more substantial evidentiary support to the stark message behind the Post's article.

The factual claim at the core of the Post's 6 June 2019 article was that the number of gun-related deaths in the United States between 1 January and 6 March was about the same as the total number of U.S. soldiers killed on D-Day, 75 years earlier.

That claim was highly accurate, although the number of gun deaths presented was not perfectly so according to our analysis of GVA data, and even the most reliable figures available for Allied combatant deaths are estimates that should not be treated as definitive or final.