Always read past the headline. 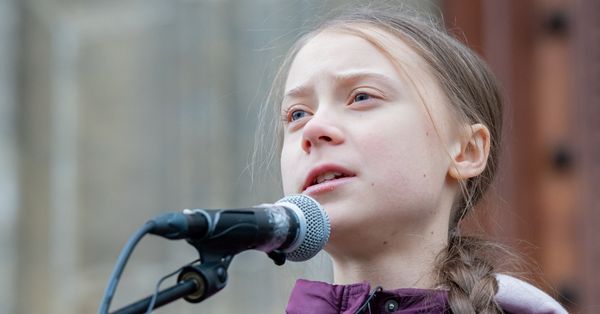 The Gateway Pundit headline read, "'My Advice For You is to Choose Wisely' – Greta Thunberg Threatens Congress on Earth Day (VIDEO)."

The story was something of a bait-and-switch because, while the headline advertised a threat, the story reports that Thunberg actually just warned U.S. lawmakers how their legacies will be viewed by future generations:

"Thunberg on Thursday warned politicians that today’s youth will decided how those in power 'will be remembered' so tread lightly and take action to fight climate change now."

Thunberg's comments can be heard in full in the following C-SPAN video:

Thunberg was among various stakeholders invited to speak virtually to a U.S. House of Representatives panel during a hearing held on Earth Day, a day on which U.S. President Joe Biden pledged to slash U.S. greenhouse gas emissions in half by 2030.

Here is a full transcript of Thunberg's comments:

Thank you, and first of all, thank you for inviting me and for holding this hearing. I don't represent any financial or political interests. I'm not a lobbyist, so I can't negotiate, make deals or compromise. I have nothing to offer you, nor am I a scientist. All I can do is to urge you to listen to and act on the science and to use your common sense. And I'm not even going to explain why we need to make real drastic changes and dramatically lower our emissions in line with overall current best available science. It is the year 2021. The fact we are still having this discussion, and even more, that we are still subsidizing fossil fuels directly or indirectly, using taxpayer money is a disgrace. It is a clear proof that we have not understood the climate emergency at all.

If you compare the current so-called climate policies to the overall current best available science, you clearly see that there is a huge gap, the gap between what we are doing and what actually needs to be done in order to stay below the 1.5-degree celsius targets is widening by the second. And the simple fact and uncomfortable fact is that if we are to live up to our promises and commitments in the Paris Agreement, we have to end fossil fuel subsidies, stop new exploration and extraction, completely divest from fossil fuels and keep the carbon in the ground. Now. Especially the U.S., taking into account the fact that it is the biggest emitter in history. And just to be clear, that is not my opinion, it is what the science clearly shows.

And yet this is just the very minimum amount of effort that is needed to start the rapid sustainable transition. And it may seem like we are asking for a lot, and you will, of course, say that we are naive, and that's fine. But at least we are not so naive that we believe things will be sold through countries and companies making vague, distant, insufficient targets without any real pressure from the media and the general public.

So either you do this or you're going to have to start explaining to your children and the most affected people why you are surrendering on the 1.5-degree target, giving up without even trying. Well, what I am here to say is that unlike you, my generation will not give up without a fight.

And, to be honest, I don't believe for a second that you will actually do this. The climate crisis doesn't exist in the public debate today. And since it doesn't really exist and the general level of awareness is so absurdly low, you will still get away with contributing to the destruction of present and future living conditions. And I know I'm not the one who is supposed to ask questions here, but there is something I really do wonder.

How long do you honestly believe that people in power like you will get away with it? How long do you think you can continue to ignore the climate crisis, the global aspect of equity and historic emissions without being held accountable? You get away with it now, but sooner or later, people are going to realize what you have been doing all this time. That's inevitable.

You still have time to do the right thing and to save your legacies. But that window of time is not going to last for long. What happens then? We the young people are the ones who are going to write about you in the history books. We are the ones who get to decide how you will be remembered. So my advice for you is to choose wisely. Thank you.