Did a Mural of Greta Thunberg Use 700 Gallons of Spray Paint?

A right-leaning social media activist grossly exaggerated the environmental impact of a San Francisco mural in honor of the climate change activist. 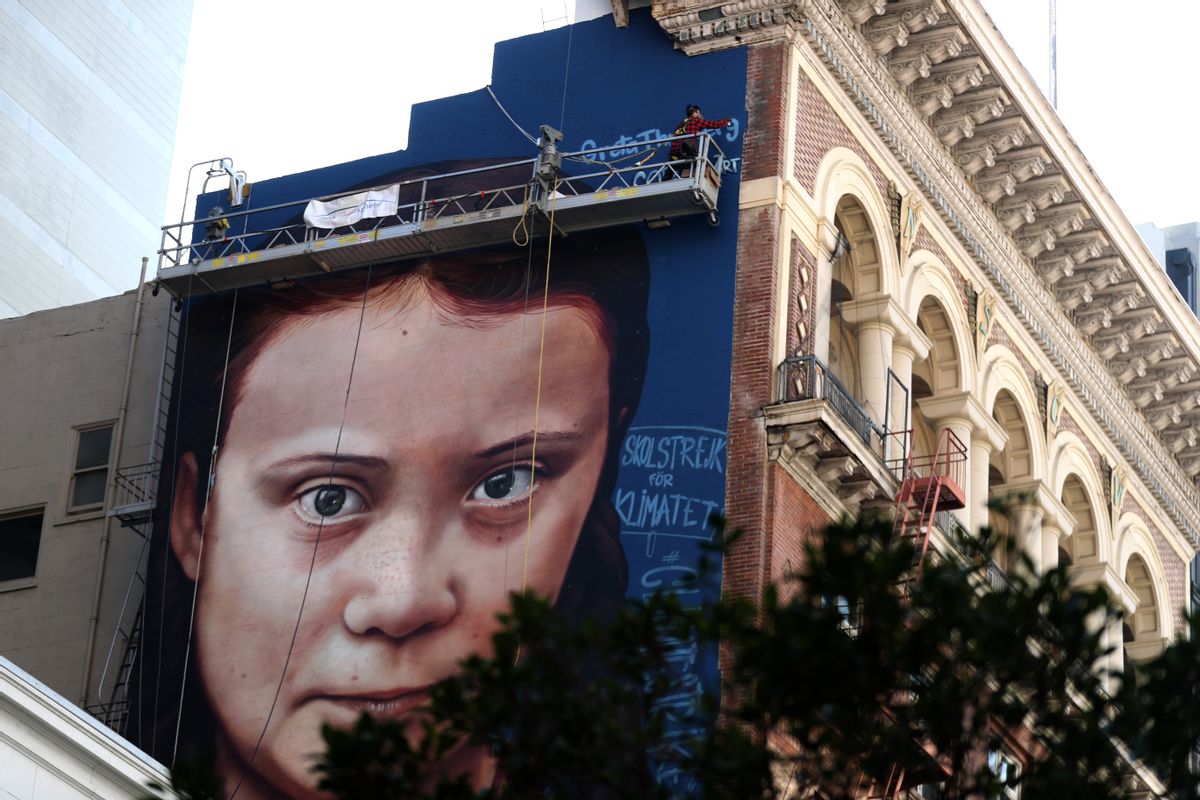 In November 2019, we received multiple inquiries from readers about widely shared social media posts claiming irony or hypocrisy at work in the production of a massive San Francisco mural in honor of the young climate activist Greta Thunberg.

On Nov. 8, the right-leaning social media activist Brandon Straka tweeted a link to a KPIX-TV article about the mural, adding his own view that, "The leftist geniuses in San Francisco have decided to send a message about climate change by creating a 6 story [sic] mural of Greta Thunberg using 700 gallons of aerosol spray paint."

The leftist geniuses in San Francisco have decided to send a message about climate change by creating a 6 story mural of Greta Thunberg using 700 gallons of aerosol spray paint. ? https://t.co/LdJj2i3j99

The text of Straka's tweet, and screenshots of it, were further promulgated by multiple users on Facebook. The KPIX-TV article to which he linked did not contain any reference to the paint used by Argentinian artist Andrés Pereoselli (known as "Cobre") in creating the Thunberg mural. As such, it did not provide any evidence to support Straka's key claim, that the portrait of the climate activist required 700 gallons of aerosol spray paint.

It's not clear where that figure came from, but it might have originated in an article on the right-leaning website The Blaze, which wrote:

"While it is unclear how many spray cans [Cobre] has used, the mural spans four stories and at least one smaller project utilized 500 cans of the paint scientists say can generate asthma-inducing smog."

The Daily Wire, another right-leaning website, subsequently extrapolated that "the Thunberg mural will likely take closer to 700 cans to finish."

In response to concerns about the use of aerosol spray paint, One Atmosphere, a California environmental non-profit group that collaborated with Cobre on the mural, posted the following explanation to Instagram on Nov. 11:

Some folks have been asking about the environmental impacts of the Greta mural. Read on for some details. The vast majority of the paint is water-based acrylic exterior paint that was rolled onto the building by hand. The finishing details can only be done with spray paint, but we are using spray cans without CFCs. (CFCs are tremendously damaging to the environment). We are using low pressure cans with a minimal footprint. The cans and the boxes will also be recycled, although many of the cans will first have a second life as part of a separate art project.

The cans have been picked up and delivered in an electric vehicle, and the artist and organizers have been travelling almost exclusively by way of electric car, electric scooter or on foot to the project site. The lift being used is also electric, not diesel. We are doing our best to Reduce, Reuse, Recycle, in that order!

After the completion of the project, One Atmosphere's Executive Director Paul Scott provided further details to Snopes in an email. He firmly rejected the claim that the project required 700 gallons, or even 700 cans, of spray paint.

In reality, Scott said he counted a total of 117 used 400-ml cans of spray paint, almost all of them from the MTN 94 brand. That's just over 12 gallons in total. However, only some of that 400-ml capacity is taken up by the hydrocarbon propellant that escapes into the atmosphere (as opposed to the liquid paint, which ends up on the side of the building).

All aerosol spray paints use a propellant to help disperse the paint from the can and onto its intended surface. In the past, manufacturers used chlorofluorocarbons (CFCs), chemicals that were widely banned from the late 1980s onwards due to the fact that they deplete the ozone layers in the Arctic and Antarctic Circles.

In the United States in 2019, spray paint manufacturers use hydrocarbons such as propane and butane as propellants. Unlike CFCs, hydrocarbons don't have a deleterious effect on ozone, but they do have a small effect on global warming. However, it's worth putting the scale of that effect into some context, using a measure known as Global Warming Potential.

As the federal Environmental Protection Agency (EPA) explains on its website:

"The Global Warming Potential (GWP) was developed to allow comparisons of the global warming impacts of different gases. Specifically, it is a measure of how much energy the emissions of 1 ton of a gas will absorb over a given period of time, relative to the emissions of 1 ton of carbon dioxide (CO2). The larger the GWP, the more that a given gas warms the Earth compared to CO2 over that time period."

The CFCs used as propellants in aerosol paint in the past have a GWP of between 5,000 and 14,000. Propane, a hydrocarbon commonly used now as a propellant in spray paint, has a GWP of 4. In his email to Snopes, Scott added that, "The amount of the propellant is also less because the cans are lower pressure, and obviously only a portion of each can is propellant, so the ultimate GWP impact of the cans we used is very limited."

Scott told Snopes that One Atmosphere had also sought to neutralize any effects caused by the Thunberg mural through the use of carbon offsets. He wrote: "We purchased carbon offsets that will cover far more than the small footprint left by the limited number of spray cans used on our project."