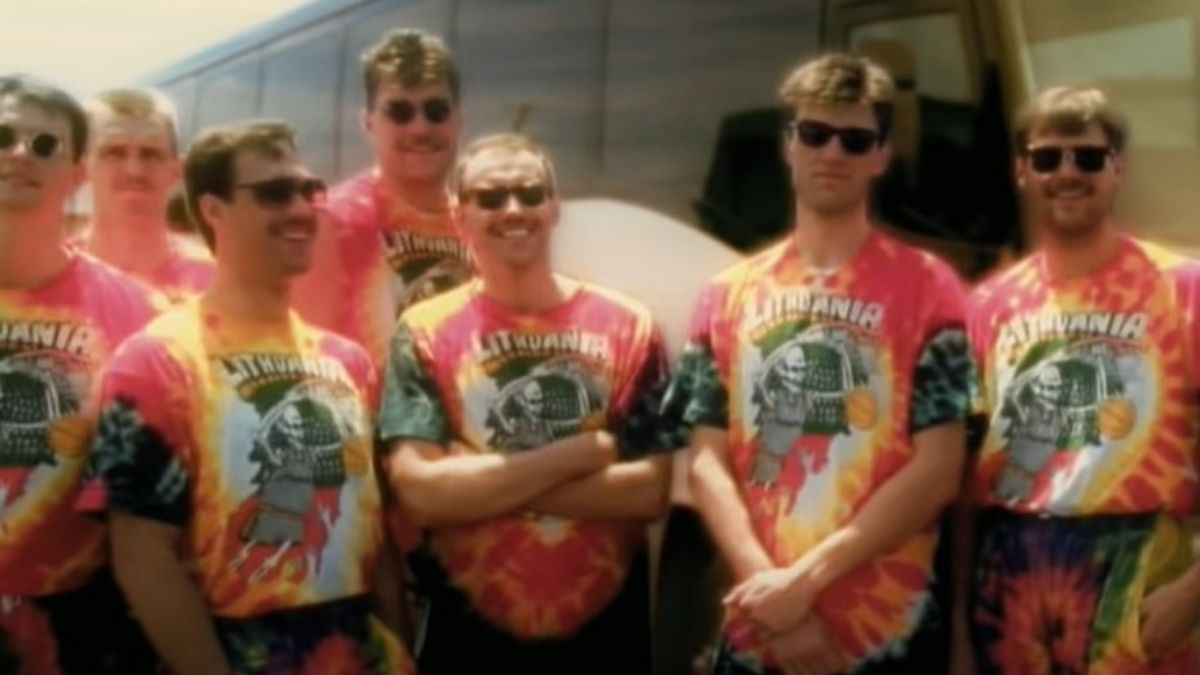 Claim:
The Grateful Dead funded Lithuania's basketball team at the 1992 Olympics and provided the players with tie-dyed jerseys.
Rating:

The Grateful Dead provided some financial support to fund the Lithuania basketball team's trip to the 1992 Olympics. More importantly, they provided the team with a license to sell special Grateful Dead-Olympics merchandise. However, the band was not the sole source of funding for the team.

In July 2021, as the pandemic-delayed 2020 Olympic games approached, an interesting tidbit about basketball, Lithuania, and the 1960s psychedelic rock band the Grateful Dead started to circulate on social media. A viral Reddit post claimed that "after the breakup of the USSR, the Lithuanian basketball team couldn't afford to participate in the 1992 Olympics, so the Grateful Dead funded the team's expenses and sent a box of tie-dyed outfits in Lithuania's national colours. They went on to win bronze." This post is generally accurate. The Grateful Dead really did sponsor Lithuania's men's basketball team, and they did provide the team with tie-dyed shirts bearing the country's national colors (yellow, green, and red), and a "Skullman" logo designed by Greg Speirs, which can be seen above. Our one quibble with this claim is that the band was not the team's sole source of funding. While the Grateful Dead did provide the team some financial support (one report states that the band wrote a $5,000 check), the band's main contribution was that it allowed the team to sell special Grateful Dead merchandise, which proved massively popular with fans at the 1992 Olympic Games.

Here's a newspaper clipping from 1992 about the popularity of these shirts. According to Grateful Dead spokesman Dennis McNally, some 20,000 shirts sold in the first week. A third of the money raised went to the Lithuanian Olympic Committee, and the band got "nothing more than a good time." 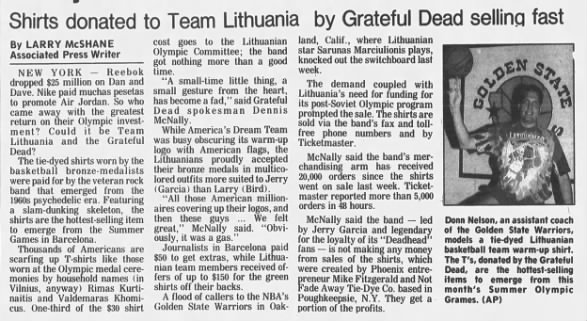 The Grateful Dead's connection with the Lithuanian basketball team started in 1992 when Sarunas Marciulionis, the team's star guard, and scout Donnie Nelson showed up at a garage in San Francisco to hear the band play. The team, which would be competing in its first Olympic games since the country declared independence from the Soviet Union a few years earlier, was seeking sponsors to fund their trip to Barcelona.

Here's an excerpt from an article published on NBCOlympics.com in 2012 (archived here):

On a cold and windy Bay Area winter day 20 years ago, Sarunas Marciulionis and Donnie Nelson, a starting guard and a scout, respectively, for the Golden State Warriors, knocked uncertainly on the door of a nondescript garage in San Francisco. The Grateful Dead is in here? Nelson thought to himself.

Somebody said to enter, and so they did, metaphorical hats in hand, taking in the sights and, more vividly, the smells.

"Well, there was a little pot going on," Nelson recalls today. "The Dead were trying out Beatles covers, doing stuff like 'Here Comes the Sun' and 'Hey Jude,' but they were just kind of working through things and sounding kind of nasally. Sarunas pulls me aside and says, 'Donnie, no way these guys are famous. They're terrible.'" Nelson shakes his head and smiles. "I always think back and wonder what it would be like if someone caught that scene today -- Sarunas in the Dead pot garage."

The Dead had heard about the Marciulionis-Nelson crusade to raise money to enable Lithuania, Marciulionis's native land, to try to qualify for the 1992 Olympics in Barcelona. "You're all about liberty and freedom and, man, we're all about that, too, so we dig what you guys are doing," said Jerry Garcia, the Dead's leader. That's a paraphrase but, if you've ever heard Jerry (who died in 1995), it's pretty close.

NBC reported that the band ended up writing the team a check for $5,000. More importantly, the band gave the team a license to use and sell special Olympics-Grateful Dead merchandise. These items were a major hit and helped the team raise funds that were then used to fund their participation in the 1996 Olympics.

Strong anti-Soviet reaction from the West helped force a treaty, but by the time Marciulionis decided that he wanted to field a team, the nation was nearly bankrupt. He donated some of the money from his $1.28 million Golden State contract, and, with the help of Nelson, whom he had tapped to be Lithuania's assistant coach, set out to raise the rest.

Getting the Dead was a major coup. The band wrote a check for $5,000 but more importantly granted Lithuania the rights to sell a Dead t-shirt, a stoned-out psychedelic masterpiece splashed with Lithuania's national colors of green, red, and yellow and anchored by the Dead's skeleton symbol.

Purely from a fund-raising perspective, sales of the t-shirt had more to do with the 1996 Olympics; it financed most of Lithuania's participation in the Atlanta Games. But the t-shirt became the hit of the '92 Games, more treasured than any of the merchandise bearing the likeness of Michael Jordan, Magic Johnson and Larry Bird, the stalwarts of the United States Dream Team. The shirt kept Lithuania in the news, told the story of its heroic struggle for freedom, its battle to get to Barcelona (it earned a spot through the European Olympic qualifier) and its quest for a medal.

For many American basketball fans, the 1992 Olympics are probably remembered for the dominant play of the "Dream Team," the American Olympic team that featured superstars such as Michael Jordan, Magic Johnson, and Larry Bird. But the Lithuanian team made its mark as well. In 2012, a documentary was released entitled "The Other Dream Team," which followed Arvydas Sabonis and Šarūnas Marčiulionis on their somewhat psychedelic journey to a bronze medal.