Hillary Clinton supported Barry Goldwater in 1964, but she didn't vote for a candidate who vowed to "re-segregate" America. 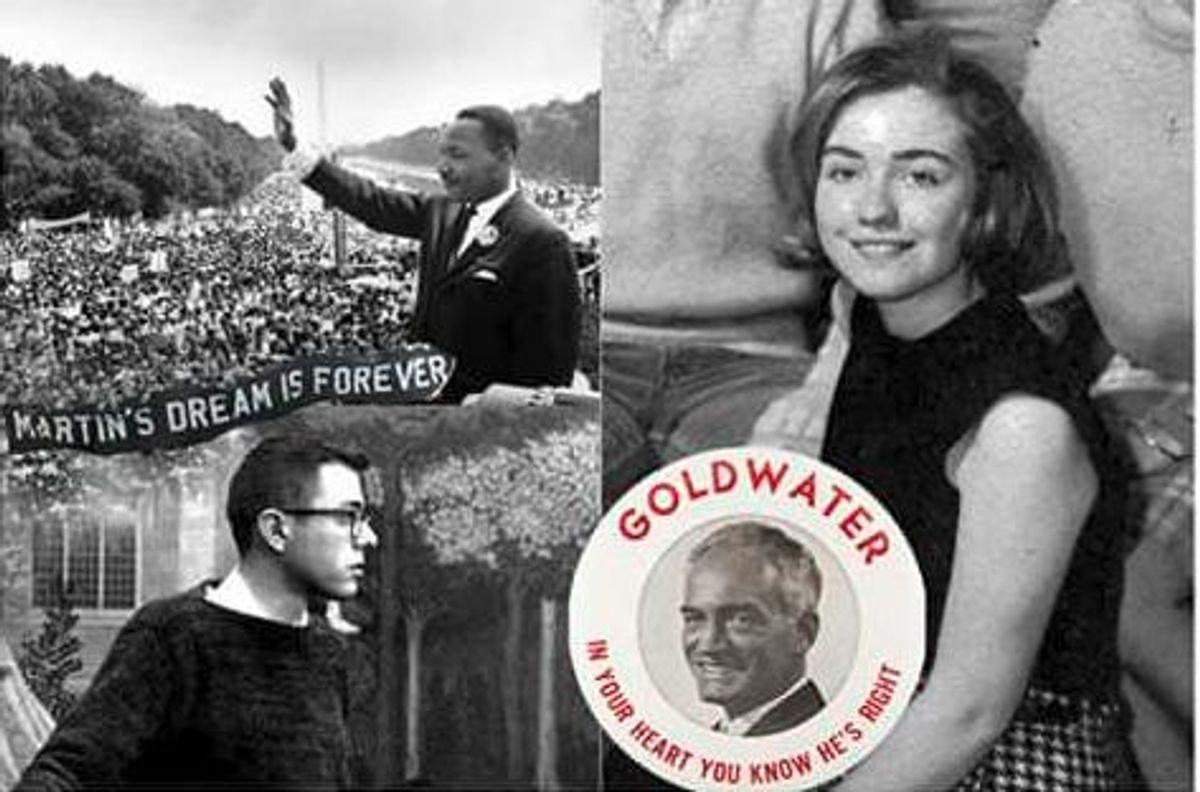 Claim:
In 1964, Hillary Clinton campaigned and voted for Barry Goldwater, who promised to overturn the Civil Rights Act and "re-segregate" America.
Rating:

Hillary Clinton supported Goldwater in the 1964 presidential election; Goldwater voted against the Civil Rights Act of 1964.

Despite her current status as a Democratic icon, former first lady, U.S. senator, secretary of state, and presidential candidate Hillary Clinton had some significant exposure to conservative politics in her youth. In her autobiography Living History, Clinton described her father as a "rock-ribbed, up-by-your-bootstraps, conservative Republican and proud of it" and noted that she had been a Young Republican and a supporter of Arizona senator Barry Goldwater, the most prominent conservative Republican of his era, during Goldwater's (failed) 1964 presidential campaign against incumbent Lyndon Johnson:

I was an active Young Republican, and, later, a Goldwater girl, right down to my cowgirl outfit and straw cowboy hat emblazoned with the slogan "AuH2O."

My ninth-grade history teacher, Paul Carlon, was, and still is, a dedicated educator and very conservative Republican. Mr. Carlson encouraged me to read Senator Barry Goldwater's recently published book, The Conscience of a Conservative. That inspired me to write my term paper on the American conservative movement ... I liked Senator Goldwater because he was a rugged individualist who swam against the political tide.

Hillary Clinton didn't last long on that side of the political spectrum, however, reporting that "By the time I was a college junior, I had gone from being a Goldwater Girl to supporting the [1968] anti-war campaign of Eugene McCarthy."

The meme shown above (circulated on social media in conjunction with the Martin Luther King Day holiday) plays on that brief period of Ms. Clinton's early political interest, claiming that she both "actively campaigned" and "voted" for Goldwater, a candidate who sought to "overturn the Civil Rights Act" and "re-segregate the nation." Those statements are highly exaggerated versions of what Clinton and Goldwater actually thought and did, however.

Although Hillary Clinton may have been a Goldwater supporter in 1964, saying she "actively campaigned" for him implies a more substantive role than the one she actually played. She was a mere 16-year-old who wasn't a member of the Goldwater campaign staff in any way, nor did she even meet the candidate — she related in Living History that she had to persuade her father to drive her and a friend to hear Goldwater speak when the GOP nominee made a campaign swing by train through the Chicago suburbs. And although Hillary Clinton might have wanted to vote for Barry Goldwater in 1964, the fact is that she didn't: she turned 17 just a few weeks before the election and thus wasn't eligible to vote for anyone, as the minimum voting age at the time was 21.

Likewise, although Barry Goldwater famously voted against the Civil Rights Act of 1964 in the Senate (one of six Republicans to do so), he was no opponent of civil rights who sought to "re-segregate the nation." Goldwater had supported earlier attempts to pass civil rights legislation in 1957 and 1960, as well as the 24th Amendment (which outlawed poll taxes that disenfranchised Southern black voters), and his stated opposition to the Civil Rights Act of 1964 (which he otherwise favored) was based on his belief that two portions of the bill regulating the behavior of private enterprise were unconstitutional, would be unenforceable without a federal police force, and would lead to the creation of racial quotas and affirmative action:

I realize fully that the Federal government has a responsibility in the field of civil rights, but it would serve no purpose at this juncture to review my position as to just where that Federal responsibility appropriately lies. I supported the civil rights bills which were enacted in 1957 and 1960, and my public utterances during the debates on those measures and since reveal clearly the areas in which I feel the Federal responsibility lies and Federal legislation on this subject can be both effective and appropriate. Many of those areas are encompassed in this bill, and to that extent I favor it.

I wish to make myself perfectly clear. The two portions of this bill to which I have constantly and consistently voiced objections, and which are of such overriding significance that they are determinative of my vote on the entire measure, are those which would embark the Federal government on a regulatory course of action with regard to private enterprise in the area of so-called 'public accommodations' and in the area of employment — to be more specific, Titles II and VII of the bill.

I find no constitutional basis for the exercise of Federal regulatory authority in either of these two areas; and I believe the attempted usurpation of such power to be a grave threat to the very essence of our basic system of government, namely, that of a constitutional republic in which fifty sovereign states have reserved to themselves and to the people those powers not specifically granted to the central or Federal government.

If it is the wish of the American people that the Federal government should be granted the power to regulate in these two areas and in the manner contemplated by this bill, then I say that the Constitution should be so amended by the people as to authorize such action in accordance with the procedures for amending the Constitution which that great document itself prescribes.

I say further that for this great legislative body to ignore the Constitution and the fundamental concepts of our governmental system is to act in a manner which could ultimately destroy the freedom of all American citizens, including the freedoms of the very persons whose feelings and whose liberties are the major subject of this legislation.

My basic objection to this measure is, therefore, constitutional.

But, in addition, I would like to point out to my colleagues in the Senate and to the people of America, regardless of their race, color, or creed, the implications involved in the enforcement of regulatory legislation of this sort. To give genuine effect to the prohibitions of this bill will require the creation of a Federal police force of mammoth proportions.

It also bids fair to result in the development of an 'informer' psychology in great areas of our national life — neighbors spying on neighbors, workers spying on workers, businessmen spying on businessmen, where those who would harass their fellow citizens for selfish and narrow purposes will have ample inducement to do so. These, the Federal police force and an 'informer' psychology, are the hallmarks of the police state and landmarks in the destruction of a free society.

I repeat again: I am unalterably opposed to discrimination of any sort and I believe that though the problem is fundamentally one of the heart, some law can help — but not law that embodies features like these, provisions which fly in the face of the Constitution and which require for their effective execution the creation of a police state. And so, because I am unalterably opposed to the destruction of our great system of government and the loss of our God-given liberties, I shall vote "No" on this bill.

The vote will be reluctantly cast, because I had hoped to be able to vote "Yea" on this measure as I have on the civil rights bills which have preceded it; but I cannot, in good conscience to the oath that I took when assuming office, cast my vote in the affirmative. With the exception of Titles II and VII, I could whole-heartedly support this bill; but with their inclusion, not measurably improved by the compromise version we have been working on, my vote must be "No."

Although Goldwater voted against the Civil Rights Act of 1964 as a senator, we found no record of his having vowed to overturn it as a presidential candidate.