Is This 'God Bows Down to Trump' Sign Real? 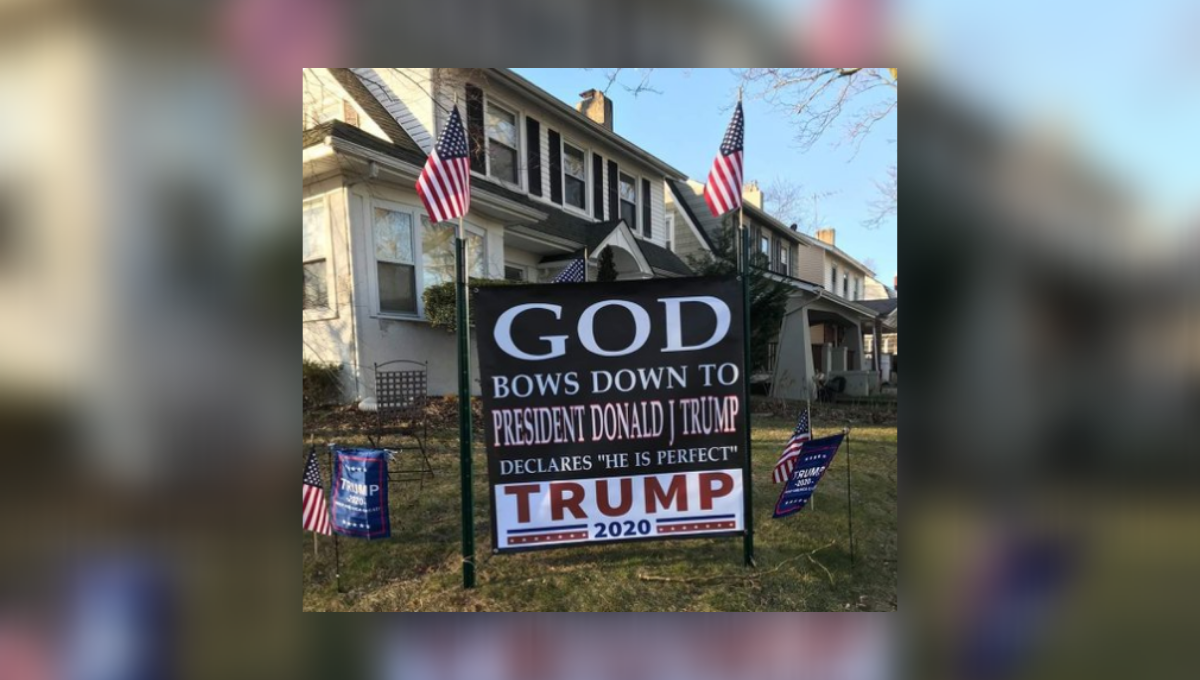 Claim:
A photograph shows a real a Trump 2020 campaign sign bearing the legend "God Bows Down to President Donald J Trump — Declares 'He Is Perfect.'"
Rating:

A photograph of a Trump campaign sign bearing the legend "God Bows Down to President Donald J Trump" is real.

The sign is one of many posted by a fervent Trump critic and is meant to be taken mockingly rather than literally.

In February 2020, social media users began asking us about a photograph showing the yard of a house festooned with U.S. flags and Trump 2020 campaign signs, with one of the latter bearing text reading, "God Bows Down to President Donald J Trump — Declares 'He Is Perfect'":

The photograph is real and depicts a sign posted by an Asbury Park, New Jersey, resident named David Sander.

However, Sander is definitely not a Trump supporter. Since the 2016 election, Sander has posted over a hundred signs in his yard bearing messages that criticize and poke fun at the current chief executive:

The Asbury Park Press reported that David Sander, 66, has produced well over a hundred messages that he considers them "political humor" and an exercise of his First Amendment right to free speech.

Police, however, recently asked him to take down his latest sign: a suggestive sexual encounter between President Trump and Russian President Vladimir Putin, according to the report.

Here is The Asbury Park Press's video on the matter, showing that this isn't the first time Sander has drawn attention because of his signs:

As documented in a News 12 Long Island report, at least one of Sander's banners prompted an obscenity complaint to police, who paid a visit to Sander to advise him he could be charged with a crime if he failed to remove the offending sign:

“We are here to talk to you about displaying obscene material,” an Asbury Park police officer is heard saying on a police body camera from Sept. 29, one day after Sander posted the sign.

“A little risqué, without a question. I try to stay away from risqué, but I didn’t think there was anything wrong with it,” Sander says.

The police officers told Sander that they sent photos of his banners to the Monmouth County Prosecutor’s Office and that the prosecutor also determined the banner to be obscene.

Sander often expresses his political views through banners displayed on his lawn. He says that they are just political humor. He has displayed over 100 original banners over the last three years.

“For me to stop would mean for other people out there would be afraid to do it. It would mean that the rights in this country are being eroded,” Sander says.

This is the first time that police have visited Sander’s home since he began flying the banners after the 2016 election.

In this particular case, Sander's "God Bows Down to Trump" campaign sign display was meant to be taken ironically (or "satirically") rather than literally — it was mocking Trump and the sentiment expressed in the text rather than promoting them.