When it comes to cookies, put your money where your mouth is. 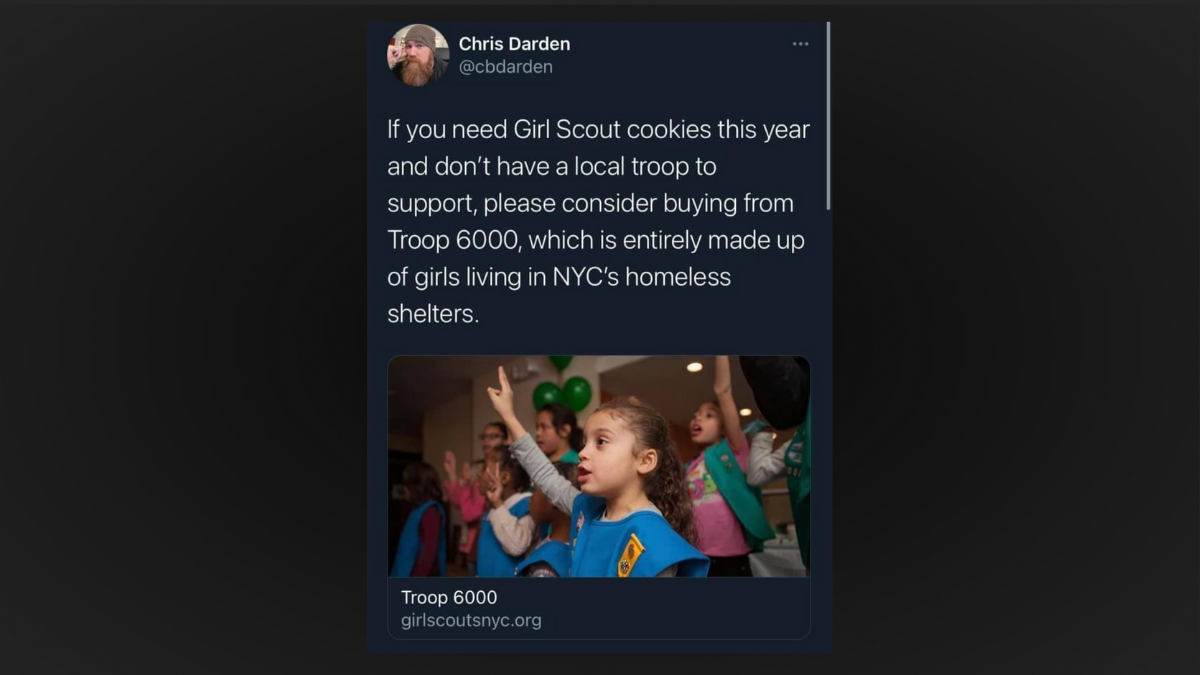 As Girl Scout Cookie season neared in early February 2021, a widely circulated social media post claimed that buying from one troop in particular may serve up a cause greater than satisfying a Tag-Along craving.

A Twitter post shared by self-proclaimed Missouri father Chris Darden on Jan. 28 claimed that Girl Scout Troop 6000 was made entirely of girls who lived in New York City’s homeless shelters. At the time of writing, the post had been retweeted more than 37,000 times.

A closer look at the Girls Scouts of Greater New York Troop 6000 website found this claim to be true. According to the group, Troop 6000 is a Girl Scout program that is specially designed to serve girls in the New York City shelter system and provide a greater source of consistency for girls transitioning from the shelter system to more permanent stability.

“The New York City Shelter System is meant to provide temporary, emergency housing for families. The average stay for a family in a city shelter is 18 months. When families transition out of the shelter and move into permanent housing, it takes time for them to get back on their feet and achieve financial stability,” wrote the group on its website.

“To help facilitate a successful transition from shelter to housing, it is essential that girls are enabled to stay connected to the community and opportunities introduced to them through joining Girl Scouts and Troop 6000, and that they receive financial support that allows them to do so.”

According to the group, there are around 70,000 people living in New York City shelters, about 12,000 of which are girls under the age of 18. The transitional programming initiative is a permanent facet of the Troop 6000 program, which ensures that girls and their mothers continue to have access to the community and consistency that it provides.

The troop serves thousands of girls who live in the shelter systems with weekly meetings held across all five boroughs of New York City in more than 15 shelters once-a-week after school, as well as virtual meetings. Each troop is led by specially trained leaders — women also living in the shelter system who are paired with community-based volunteers.

While Troop 6000 does not take physical donations, those interested in supporting the mission can donate money by clicking here and selecting Troop 6000 as the gift’s designation, or apply to become a Troop 6000 leader by completing the volunteer application form.

And of course, there are the cookies. All proceeds from each box of cookies sold by Troop 6000 supports the troop, and is used to pay for things like badge activities, uniforms, field trips, and trips to camp. Boxes of cookies can be purchased here.