Did Germany 'Fold' to Sharia Law and Allow Child Marriages?

There is no proof an image showing a white-clad little girl is a "child bride," or that Germany is allowing children to marry in accordance with supposed Sharia law. 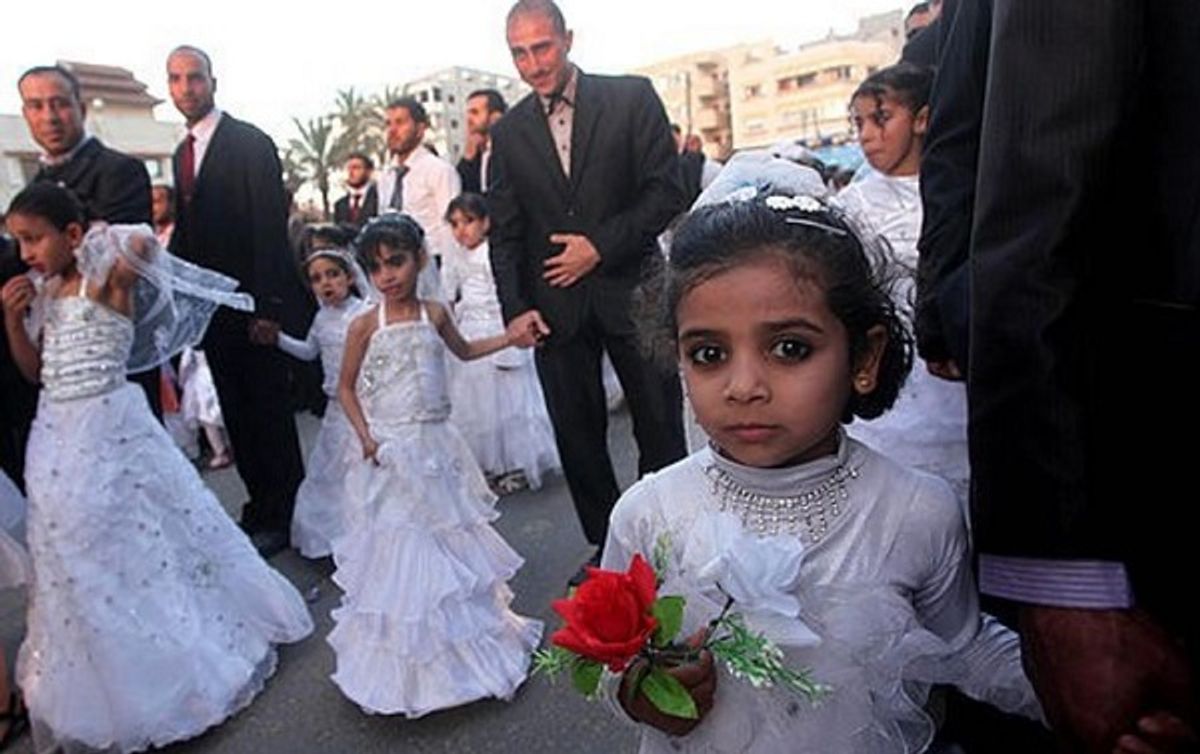 On 18 October 2016, the click bait blog Political Ears posted a photograph of young girls in white dresses standing next to grown men in suits, accompanied by the assertion that the image showed "Germany has basically fallen to the Caliphate with the blessings of globalist Angela Merkel" by allowing men to marry children.

There is neither proof that Germany is succumbing to "sharia law" and allowing adults to marry children, nor that the image is actually from Germany. The picture may be a rehash from older misinformation in which the child relatives of grooms at a mass wedding in the Gaza Strip were falsely identified as brides by a number of anti-Muslim web sites.

The earliest online appearance of this photograph we could find occurred in April 2012, when the blog Israellycool linked to a now-unavailable story about a mass wedding in Gaza. Since then the image has been spread far and wide on the web by those claiming the pictured girls are brides in various Middle Eastern countries, including Yemen, Iraq and Lebanon.

As we noted previously, mass weddings (between adults) have been a regular occurrence in Gaza in recent years, but the little girls in white dresses at those weddings are not the brides, any more than flower girls in Western weddings are — they're simply relatives of the couples getting married.

It's not certain the "Germany" image comes from Gaza, nor is it clear where the people pictured are from or what event they're participating in. Catholic girls receiving their First Communion dress like brides.

On 13 June 2016, the English-language European publication The Local reported that Germany has seen "hundreds" of migrants entering the country who are in underage marriages, saying that "in nearly all of the cases, underage girls had already been married in their homelands to grown men."

But contrary to the notion that German legislators are "folding" to "Sharia law" — blanket buzzwords often employed by Islamophobes — lawmakers there are considering how to legally deal with such marriages, as Federal Family Affairs Minister Manuela Schwesig told German reporters:

No one should be forced into a marriage, let alone underage girls. These cases show that protections for children and youth must also be applied to refugees.

Additionally, the article notes that the minimum age for marriage in Germany, like the United States, is 18. Even with parental consent teens can marry no younger than 16, so a marriage between a child and an adult in Germany would not be legally allowed or sanctioned.