Did Gerald Ford Say This About the First Woman President? 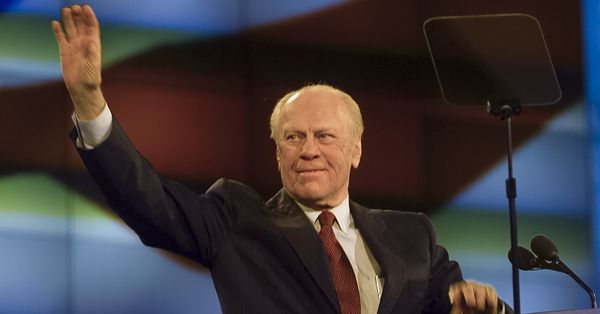 In 2022, an old quote from former U.S. President Gerald Ford gained attention, likely because the nation now, by chance, has its first female vice president, Kamala Harris (or perhaps because of the popularity of the HBO comedy "Veep," which is about a female vice president who becomes president).

Ford gave a talk in 1989 to about 100 schoolchildren, during which he claimed that a woman would occupy the office of president by first being elected vice president, and then assuming the role of commander in chief upon the death of the president.

Video of Ford's remarks, which were given at the Hoover Presidential Library and Museum in Iowa, can be viewed here:

After expressing his hope that a woman would become president, he said, "I can tell you how I think it will happen," adding that he didn't believe it would happen through the "normal course of events," likely meaning a woman wouldn't get elected president outright, at least initially.

Either the Republican or Democrat political party will nominate a man for president and a woman for vice president, and the woman and man will win. So we'll end up with a president, a male, and a vice president, a female. And in that term of office of the president, the president will die, and the woman will become president under the law, our Constitution. And once that barrier is broken, from then on, men better be careful because they'll have a hard, hard time ever even getting a nomination in the future. But that's the way it's gonna happen, and I think it will probably come some time in the next four or eight years.

Given the context of that time period, it's easy to see why Ford made those comments. Five years before his talk, Geraldine Ferraro became the first woman to be nominated for a major party ticket. A Democrat, Ferraro served as Walter Mondale's running mate in his ultimately unsuccessful attempt to unseat incumbent President Ronald Reagan, a Republican.

There wasn't another woman nominated to a major party ticket during the remainder of Ford's life, but before Harris's victory as the running mate of Joe Biden in 2020, others came close. Former Alaska Gov. Sarah Palin was nominated by the Republican party to serve as vice presidential candidate alongside John McCain in 2008, and in 2016, Democratic candidate Hillary Clinton became the first female major party nominee for the presidency to make it to the general election.