Were Dems Urged To 'Fake Residency' and Vote in Georgia Runoff Election?

Allegations of "leftists" encouraging "voter fraud" spread in right-wing media ahead of the Georgia runoff elections. 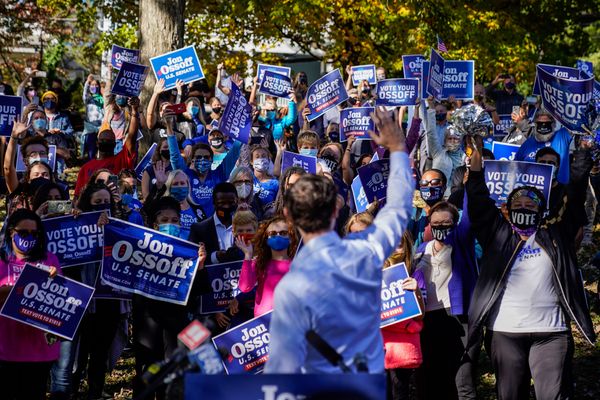 Claim:
Democrats publicly encouraged voters living outside of Georgia to temporarily move to the state and commit "voter fraud" by voting in the Georgia runoff.
Rating:

Former Democratic presidential candidate Andrew Yang announced he would move to Georgia to help elect Democrats in the runoff election and encouraged others to go there to organize and campaign; New York Times columnist Tom Friedman said he hopes everyone moves to Georgia "and votes for these two Democratic senators." It is illegal to vote in Georgia without establishing residency.

However, neither Yang nor Friedman suggested "temporarily" moving to Georgia or establishing "fake residency" there to vote in the runoff election; nor is it illegal to move to Georgia to vote in an election, so long as one becomes a legal resident.

The State of Georgia has very weak residency rules for eligibility to vote and leftists are now urging their fellow Democrats to set up fake residence in the Peach State to help Democrats win the coming run-off elections for the U.S. Senate.

One of the leftists urging this scam is former Democrat presidential candidate and Big Tech Bro, Andrew Yang.

Yang took to Twitter to tell his fans that he is "moving" to Georgia to register to vote so he can vote for the Democrats who will engage in a run-off election against the two sitting Republican Senators in January.

Democrats are openly urging people to commit a form of voter fraud by temporarily "moving" to Georgia to vote for the two Democrat challengers in the state’s upcoming Senate runoff races.

On Jan. 5, eligible voters will cast their votes for either incumbent Republican Sen. David Perdue or his challenger Democrat Jon Ossoff and GOP Sen. Kelly Loeffler or the other Democratic candidate, Raphael Warnock.

Less than a week after the 2020 election and the announcement of the runoff, New York Times Columnist Tom Friedman encouraged leftists to take interest in the race by relocating to the state and voting for the two Democrat candidates.

It is true that former 2020 Democratic presidential hopeful Andrew Yang tweeted that "Everyone who campaigned for Joe [Biden] should get ready to head to Georgia" ahead of the Senate runoff elections, and he announced that he and his wife were moving to that state:

However, Yang didn't encourage anyone to "fake their residency" or commit "voter fraud" by taking up "temporary residence" in Georgia just long enough to vote. He did, however, tweet about supporting the efforts of community organizers in Georgia to get out the vote among existing residents:

As for Friedman, on Nov. 9, 2020, he appeared on CNN's "Cuomo Prime Time" and answered a question from Chris Cuomo (the interview is viewable in full here) in which he declared, "I hope everybody moves to Georgia, you know, in the next month or two, and votes for these two Democratic senators":

Chris Cuomo: "But for the audience, just a reminder, we have more people standing in line for food in this country than we have in decades. I mean, we're talking about since the Great Depression. That takes two to tango, Tom. You know that very well. You know, if these guys are holding on to Trump's coattails thinking what, he's going to run again in four years or something like that, I mean what's the chance that we get the kinds of action we need to get past this pandemic?"

Thomas Friedman: "You can sit back, Chris, and say, 'Well it's actually good if you have divided government.' Everyone has skin in the game, OK? And then maybe they'll want to cooperate more. But what is McConnell telling us? He's not - he wants his - your scalp in the game, ok? That's what he wants. He's already telling us he's going to try to do to Biden what he did to Obama. And what that means is, I hope -- I hope everybody moves to Georgia, you know, in the next month or two, registers to vote, and votes for these two Democratic senators, running against incidentally two Georgia senators, both of whom were investigated for what? For getting a briefing on the coronavirus and then selling stocks before the public was aware of that information, both of them were investigated for that."

Friedman did not, however, specifically urge Democrats to move to Georgia temporarily just long enough to vote there, or to commit voter fraud by faking their residency status.

The Wall Street Journal reported that it is legal to move to Georgia to vote in the runoff election, but that "the last day to be registered for the Jan. 5 contests is Dec. 7." The WSJ also noted that "the new resident also would have to stay in the state for a while or risk getting into trouble":

Under Georgia law, anyone with a legal primary residence in the state can register to vote with their county board of elections. The law does not specify a specific time limit.

A spokesman for the Georgia Secretary of State’s Office, which oversees voter registrations, declined to comment on how quickly someone could establish legal residency in Georgia, but cited state law that it is a felony to vote in Georgia elections if you are not a legal resident or if you are residing in the state briefly with the intention just to vote and then move away.

Enrijeta Shino, a University of North Florida political science professor who has researched voting issues in Georgia, and who was quoted by the WSJ, warned that "voting in the state without the intention of staying would be considered fraud."