Did a Georgia Lawmaker Claim a Chick-fil-A Employee Told Her to Go Back to Her Country?

Many readers were confused by an article that altered some details of a controversial news story. 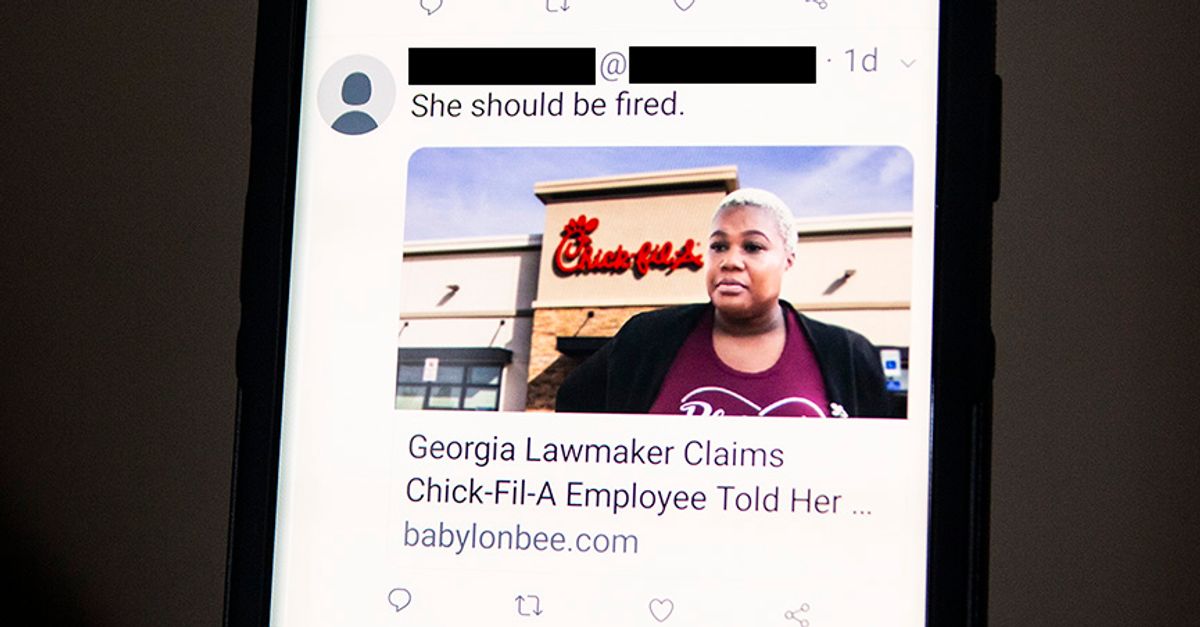 Claim:
Georgia state Rep. Erica Thomas claimed that a Chick-Fil-A employee told her to "go back" to her country.
Rating:

Editors’ Note: Some readers interpreted wording in a previous version of this fact check as imputing deceptive intent on the part of Babylon Bee in its original satirical piece about Georgia state Rep. Erica Thomas, and that was not the editors’ aim. To address any confusion, we have revised some of the wording mostly for tone and clarity. We are in the process of pioneering industry standards for how the fact-checking industry should best address humor and satire.

On July 20, 2019, Democratic Georgia state Rep. Erica Thomas posted a message on Twitter claiming that she had been verbally assaulted by a fellow customer at a Publix grocery store, who allegedly told her to "go back to where I came from." The tweet stirred up considerable outrage, especially since U.S. President Donald Trump had posted a similar message to Twitter targeting four Democratic congresswomen a few days prior.

The following day, the man involved in the altercation admitted that he had cursed at Thomas while waiting in line at a Publix store, but denied that he ever told Thomas to "go back" to where she came from. Thomas appeared to walk back her comments in a subsequent interview, saying that she wasn't exactly sure what the man said: "He said 'go back,' those types of words. I don't want to say he said 'go back to your country' or 'go back to where you came from' but he was making those types of references is what I remember." A Publix employee also told police that it was Thomas, not the customer, who was using the "go back" language.

This real-world incident stirred up a good amount of online anger on both sides, and soon afterwards the Babylon Bee published a version of the story that altered some key details. For instance, the location of the real-world incident, a Publix, was changed to the more controversial Chick-Fil-A restaurant: Georgia state rep Erica Thomas took to social media this weekend to express her disgust and outrage at a Chick-fil-A employee's comments to her in the restaurant's drive-thru. According to her viral Twitter post, the black state worker claims that after saying thank you for her food, the white cashier pointed his finger at her and angrily shouted, "Go back to your country!"

The Babylon Bee has managed to confuse readers with its brand of satire in the past. This particular story was especially puzzling for some readers, however, as it closely mirrored the events of a genuine news story, with the big exception of the website's changing the location.

We found dozens of instances of social media users who were puzzled by this article. Here are a few of the messages that were shared, along with links to this piece of satire:

At some point you would think the Race Hate Hoaxers would realize in a society increasingly covered by surveillance cameras that their false claims will be exposed. I am sorry but the left has literally destroyed this country with this crap. This is why the country is dividing so horrifically. Not because of our president but because of moronic opportunists like this! This is what happens when you play the false race card! Sadly real lives do get effected, their are real racists people out their and the extreme leftist of the world plan to silence those voices with these political games! Everyone is so triggered. This woman should be ashamed of herself. Wow, all that mess for nothing and the employee still humbly apologized after this woman made it all up. Sheesh!!!!! Stop veiling the world through fear and hate! The Babylon Bee is an entertainment website that does not publish factual stories. A disclaimer on the website reads: "The Babylon Bee is the world’s best satire site, totally inerrant in all its truth claims. We write satire about Christian stuff, political stuff, and everyday life."

Since the line between fact and fiction here is a bit blurry, let's quickly summarize what's true and what's false in regards to the lawmaker controversy:

What's true: Georgia state Rep. Erica Thomas claimed that she was verbally assaulted by a man at a Publix store who told her to "go back" where she came from. The man admitted that he cursed at Thomas, but he denied making the "go back" remark. Thomas subsequently said that she wasn't exactly sure of what the man said, and a witness claimed it was Thomas, not the customer, who used the "go back" language.

What's false: In the fictional Babylon story, the event took place at a Chick-fil-A and involved an employee, not a fellow customer.

Babylon Bee.   "Georgia Lawmaker Claims Chick-Fil-A Employee Told Her To Go Back To Her Country, Later Clarifies He Actually Said 'My Pleasure.'"     22 July 2019.

Updated [30 July 2019]: Article updated with an editors' note. Some language revised for tone and clarity regarding Babylon Bee's motivation.