Did George Washington Actually Chop Down a Cherry Tree?

A tale about honesty might have actually been very dishonest. 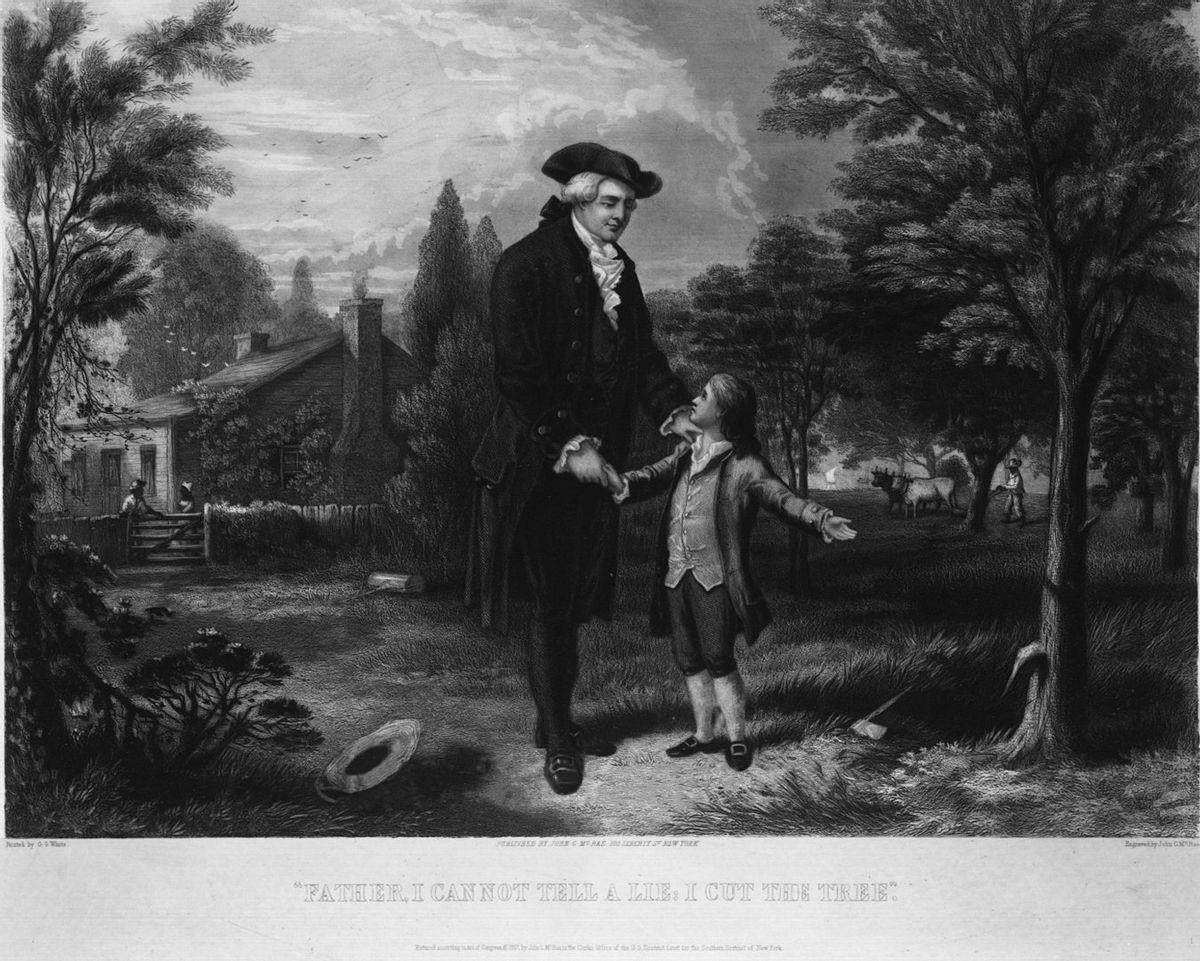 Image Via John C. McRae after a painting by G. G. White/Wikimedia Commons

Claim:
George Washington once chopped down a cherry tree as a child and confessed this to his father.
Rating:

A great American tale about honesty may not be all that honest.

A myth surrounding George Washington, the first U.S. president and Founding Father has been debunked by contemporary historians.

One of the most popular stories about Washington’s childhood is often used to teach children about honesty. The story was first published in the fifth edition of “The Life and Memorable Actions of George Washington” by Mason Locke Weems in 1806. It did not make it into the first version of the book that was published in 1800.

WHEN George, [...] was about six years old, he was made the wealthy master of a hatchet! of which, like most little boys, he was immoderately fond, and was constantly going about chopping every thing that came in his way. One day, in the garden, where he often amused himself hacking his mother's pea-sticks, he unluckily tried the edge of his hatchet on the body of a beautiful young English cherry-tree, which he barked so terribly, that I don't believe the tree ever got the better of it. The next morning the old gentleman finding out what had befallen his tree, which, by the by, was a great favourite, came into the house, and with much warmth asked for the mischievous author, declaring at the same time, that he would not have taken five guineas for his tree. Nobody could tell him any thing about it. Presently George and his hatchet made their appearance. George, said his father, do you know who killed that beautiful little cherry-tree yonder in the garden? This was a tough question; and George staggered under it for a moment; but quickly recovered himself: and looking at his father, with the sweet face of youth brightened with the inexpressible charm of all-conquering truth, he bravely cried out, "I can't tell a lie, Pa; you know I can't tell a lie. I did cut it with my hatchet"—Run to my arms, you dearest boy, cried his father in transports, run to my arms; glad am I, George, that you killed my tree; for you have paid me for it a thousand fold. Such an act of heroism in my son, is more worth than a thousand trees, though blossomed with silver, and their fruits of purest gold.

According to research published by the National Library for the Study of George Washington at Mount Vernon, Weems wrote the story after Washington’s death, anticipating readers’ demand to know about the leader’s childhood. He told a publisher in 1800, “Washington you know is gone! Millions are gaping to read something about him…My plan! I give his history, sufficiently minute…I then go on to show that his unparalleled rise and elevation were due to his Great Virtues.”

The research argued that Weems was motivated by profit, and knew readers would be curious about Washington’s private virtues, including his relationship with his father, more than his well-known public life. He was also depicting Washington as the perfect role model for young Americans.

The anecdote was recast as a children’s story in school textbooks by William Holmes McGuffey. By the 1830s, it had become entrenched in American culture. In 1835, circus entrepreneur P.T. Barnum purchased Joice Heth, an enslaved Black woman, and advertised her as being Washington’s childhood nurse. She told numerous stories as a sideshow attraction, including the one about the cherry tree.

According to the National Mall and Memorial Parks Service, the cherry tree story is basically unproven because Weem relied on an anonymous source for it. “Weems said he got the story from an elderly woman who had been friends with the family,” they wrote. “Since she chose to remain anonymous it is an unreliable source. The official answer from both Ferry Farm, Washington’s childhood home where it would have occurred, and Mount Vernon, is no, it’s only a story. But, really, does it matter?”

Phillip Levy, a historian who excavated Ferry Farm, Washington’s childhood home, wrote in his book, “Where the Cherry Tree Grew: The Story of Ferry Farm, George Washington’s Boyhood Home,” that he described the mystery of the cherry tree thus:

[...] in a host of interviews, I took great pleasure in paraphrasing [writer George Allen England] by saying that (and here I quote myself) “if George Washington did indeed chop down the Cherry Tree, as generations of Americans have believed, this is where it happened.” I liked that line. It was sufficiently circumspect, safely devoid of a claim that the story was truth, well within the tradition of Ferry Farm’s larger story, and completely true. That line, in one form or another, was picked up and repeated literally hundreds of times as the story wended its way through newspapers and Web sites.

He also revealed over the course of his excavations that no evidence was found of a rusty hatchet that people believed Washington used to chop the tree.

While some call the tale of the cherry tree false, many others argue it simply hasn’t been proven to be true yet. As such, we rate this claim as “Unproven.”

Weems, M. L, and Elizabeth Robins Pennell Collection. "The life of George Washington: with curious anecdotes, equally honourable to himself and exemplary to his young countrymen." Philadelphia: Printed for the author, 1808. Pdf. Retrieved from the Library of Congress, <www.loc.gov/item/62044994/>. Accessed 18 Feb. 2022.