Frontline Plus Flea and Tick Warning

Rumor: A dog treated with Frontline subsequently suffered an adverse reaction to the flea and tick treatment.

Claim:   Frontline Plus brand flea and tick remedy can cause serious adverse reactions in dogs.

I would like to give a warning to all dog owners (and maybe cat owners too) who use Frontline Plus. A few days ago I applied Frontlune Plus as usual on my dog Lucky. He seemed to be extra bothered by the fact that I was putting it on, but I just thought he was trying to figure out what I was doing to him. Last night he climbed into my lap on the couch and I touched the application site and he yelped and jumped off me. (This was after he was acting kinda "funny" for the last few days. I couldn't put my finger on what was wrong though.) I checked it out and the application site was full of burned skin, black and puss. I brought him in to the emergency vet at 11pm last night. They said they have been seeing a lot of this with Frontline! I had NO idea or I never would've put it on him! This is a picture after they shaved him and cleaned him up. He's now on medication for the next 10 days. Please share will anyone you know that may use this product! I don't want any other animal to be in pain like he is! 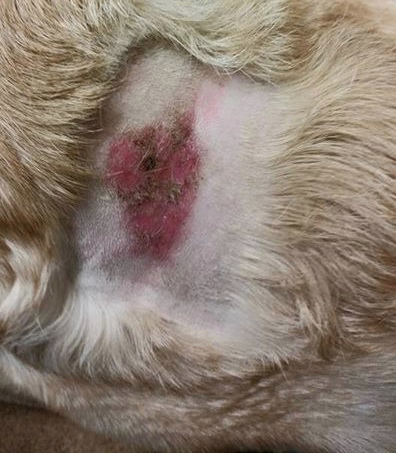 Origins:   On 2015 a Facebook user published the message and photograph shown above about Frontline Plus (a popular flea and tick remedy for pets known generically as Fipronil) and an adverse reaction

suffered by her dog Lucky which she attributed to it. The precise nature of the depicted injury was not described by Lucky's owner, nor was the dog's health prior to his exposure to Frontline Plus detailed.

Since the initial publication of the photograph and Frontline Plus warning to Facebook on 2015, the post was shared hundreds of thousands of times both directly and via Facebook pages devoted to the well-being of dogs and other pets. Many users commented on the posts, stating that they've used the product without incident. Others claimed similar adverse reactions, and some users opined that products purchased through sources other than veterinarians (such as online pharmacies) accounted for some reported adverse reactions. Given the scant detail included about the depicted reaction, the health of the dog, or the source of the dispensed medication, it's difficult to determine whether factors such as point of purchase influenced the animal's injuries. (We note, however, that similar unsubstantiated claims have been made about just about every major brand of flea and tick remedy, including ProMeris, Hartz, and Trifexis.)

Most of the problems were minor, such as skin rashes, but about 600 dogs and cats died in the incidents reported in 2008, EPA records show.

A popular online pet medication retailer listed skin irritation at the site of application as a known potential side effect of Frontline and Frontline Plus:

Your pet may experience some temporary irritation at the site of application. If signs persist or become more severe within a few days of application, consult your veterinarian immediately.

The circumstances under which the irritation attributed to Frontline Plus developed were not described by the Facebook user; and irritation at the site of application is a clearly stated, known side effect of Fipronil. In addition to adverse reactions due to drug interactions or pre-existing injury to the treated area, some animals are simply allergic to Fipronil and are unable to tolerate its application. Small pets in particular are at risk of an adverse reaction to Frontline or Frontline Plus due to their size.