Does quoting some else's words back to them constitute a breach of decorum? 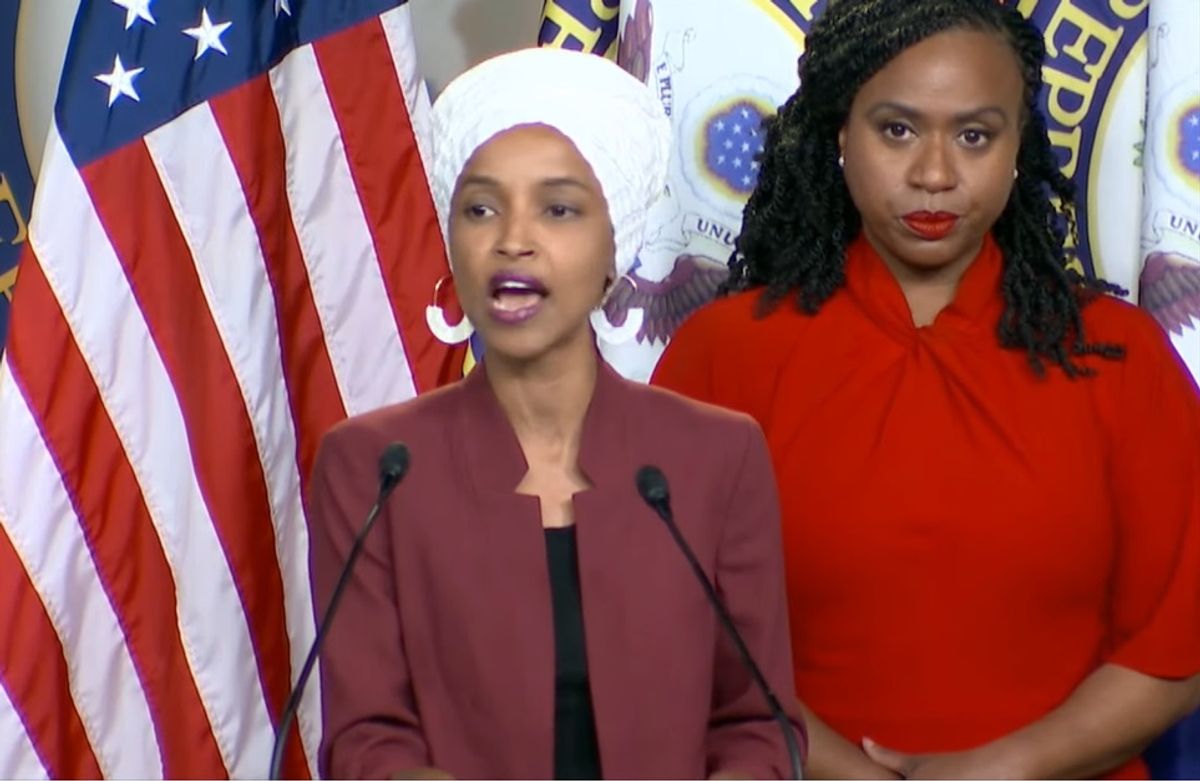 After U.S. President Donald Trump tweeted a criticism in mid-July 2019 that suggested some “‘Progressive’ Democrat Congresswomen who originally came from countries whose governments are a complete and total catastrophe" should "go back and help fix the totally broken and crime infested places from which they came," the four representatives whom the president was presumably referencing — Ilhan Omar, Alexandria Ocasio-Cortez, Rashida Tlaib, and Ayanna Pressley —held a news conference to respond to his comments:

During that news conference, Rep. Ilhan Omar of Minnesota — the only one of the four Congresswomen who was actually born outside the United States (in Somalia) — retorted that Trump's attacks were intended to distract from more important issues and sought to divide Americans: "This is a president who has ultimately violated the very value our country aspires to uphold. To distract from that, he is launching a blatantly racist attack on four duly elected members of the United States House of Representatives, all of whom are women of color," Rep Omar declared.

Soon afterwards, social media users began circulating a graphic claiming or questioning whether Fox News had reported on the news conference with a headline declaring that Rep. Omar had engaged in a "profanity-laced attack on President Trump," even though all of the profanity Omar used in her remarks was a direct quotation of Trump's own words: The headline was later altered to reflect that Omar had used the "president's words to deliver heated, profanity-laced attack on Trump": The Independent also observed that a "Fox News pundit complained that Ilhan Omar used profanity when quoting Donald Trump," maintaining that Omar's quoting of Trump's own statements was somehow more unseemly than Trump's original remarks because Trump “didn’t make them on live television at five o’clock”:

A Fox News pundit has complained that Ilhan Omar used profanity when quoting Donald Trump in response to a series of racist tweets he directed at the Democratic congresswoman.

[I]n a discussion of the congresswomen’s impassioned rebuke of the US president on Fox News, pundit [Dana] Perino said: “Can we also mention the profanity?”

In response, one of Ms Perino’s co-hosts, said: “They can argue, well that’s what Trump said. So I’m going to say it.”

“But he didn’t say it on live television at 5 o’clock in the afternoon,” Ms Perino added.

“These are things that they’re quoting from other places. He didn’t say it on television."