The Upper Peninsula of Michigan is, believe it or not, in Michigan. 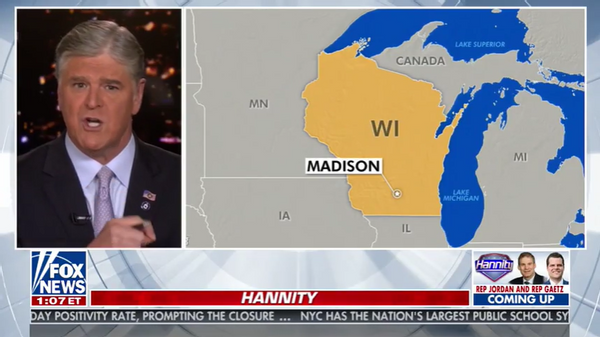 On Nov. 19, 2020, an image circulated on social media supposedly showing a screenshot from a Fox News broadcast in which host Sean Hannity displayed a U.S. map that mislabeled the Upper Peninsula of Michigan as Canada: This is a genuine screenshot from Fox News.

The area marked "Canada" in the above-displayed map is actually the Upper Peninsula of the state of Michigan.

The Detroit Free Press took offense on behalf of the Yoopers:

The Upper Peninsula is a lot of things: Beautiful, natural, rural, teeming with minerals, you name it. But it is most definitely and inarguably not Canada.

Unfortunately, it was labeled as such during Thursday night's "Hannity" on Fox News, when conservative talk show personality Sean Hannity was discussing Wisconsin's 2020 election recount efforts.

This graphic was displayed during a segment on Hannity's Nov. 18 show when he was discussing U.S. President Donald Trump's efforts to start a recount in Wisconsin, a state he lost to President-elect Joe Biden by more than 15,000 votes. A video of this moment is available via archive.org.

While the above-displayed image is genuine, Fox News did correct this map the following evening. On Nov. 19, when Hannity again discussed Trump's efforts to overturn the election results, this same map was displayed. This time, however, the Upper Peninsula of Michigan was unlabeled: A video of the Nov. 19 segment with the correctly labeled map can be seen here.