Did Fox News Ignore News of Paul Manafort's Indictment and Cover a Cheeseburger Emoji Controversy Instead?

A joke about Fox News' coverage of Paul Manafort's indictment morphed into claims that the network failed to cover the political news at all. 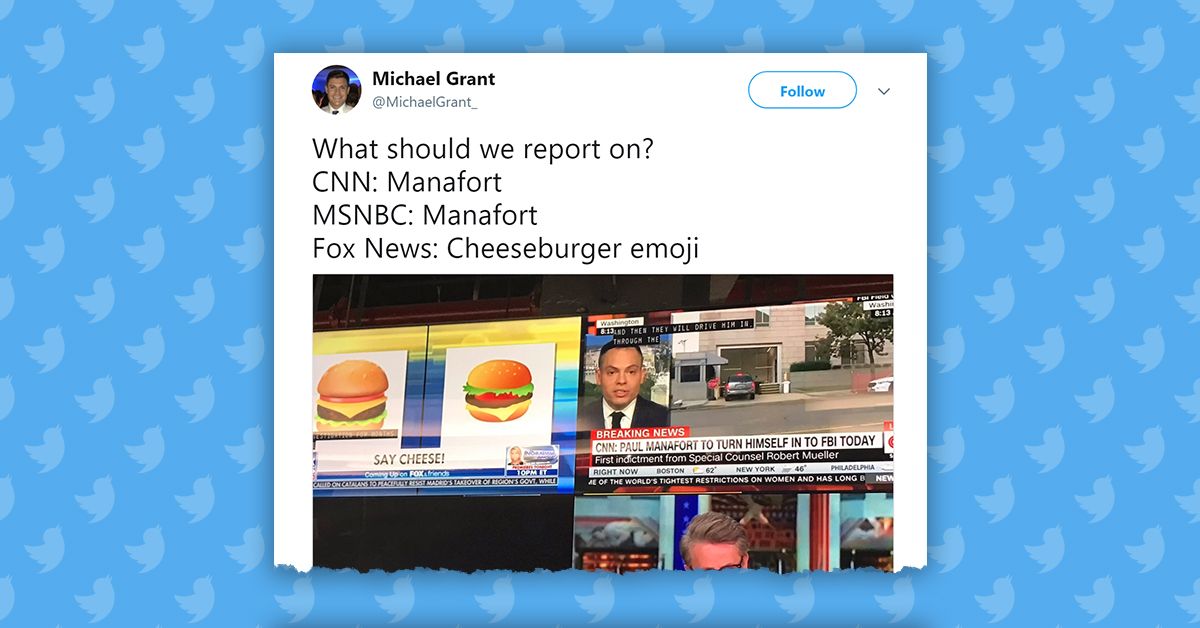 Conservative news did not make a meal of a silly emoji story about cheeseburgers instead of covering the federal investigation into alleged Russian election tampering.

The indictment of Paul Manafort on 30 October 2017 trended across Twitter (with hashtags like #HappyIndictmentDay), as did a related meme suggesting that Fox News instituted a blackout of the political development in favor of reporting the same news carried on competitors MSNBC and CNN:

Paul Manafort just agreed to turn himself in to the FBI. What should we report on?
CNN: Manafort
MSNBC: Manafort
Fox News: Hamburger emoji pic.twitter.com/Wjsvkb2coW

Manafort turns himself in 2 FBI. CNN: Manafort top story. MSNBC: Manafort breaking news. FOX: but where should cheese go on a cheeseburger?? pic.twitter.com/cG1eOQNmA5

It didn't take long for the claim to take root as a literal assessment of Fox News' 30 October 2017 programming schedule during breaking, high-interest political news:

The Twitter timeline for @FoxAndFriends told a different story. Tweets concurrent with the show's on-air reporting centered heavily on Manafort's indictment — and we were unable to find any linking to content about a "cheeseburger emoji":

.@JonathanTurley: #MuellerMonday is like the Academy Awards in Washington of who’s in the indictment envelope pic.twitter.com/seXBfP8wgf

During the apex of general coverage (at 8:18 AM EST and after), @FoxAndFriends tweeted:

However, Fox was not the only major news network to cover the cheeseburger emoji controversy on the same day the indictment made headlines:

Although it appears that the meme began as a joke about Fox News covering a cheeseburger emoji controversy in lieu of the topical events surrounding Paul Manafort, it quickly became something people on social media believed was literally the case.

The answer, unfortunately for Hannity-haters everywhere, is no.

As this clip from this morning’s Fox & Friends shows, the bulk of airtime was spent in anticipation of the indictment, with the emoji story briefly appearing to pad out the show between updates....

The story later made an appearance as part of a brief news round-up that aired immediately before a commercial break.

By comparison, CNN also covered the emoji debate, yet Twitter focused on the early morning show's comprehensive coverage of the Manafort news.