Was This a Real Fox News Chyron?

It turned out a joke Fox News chyron wasn't that far from reality. 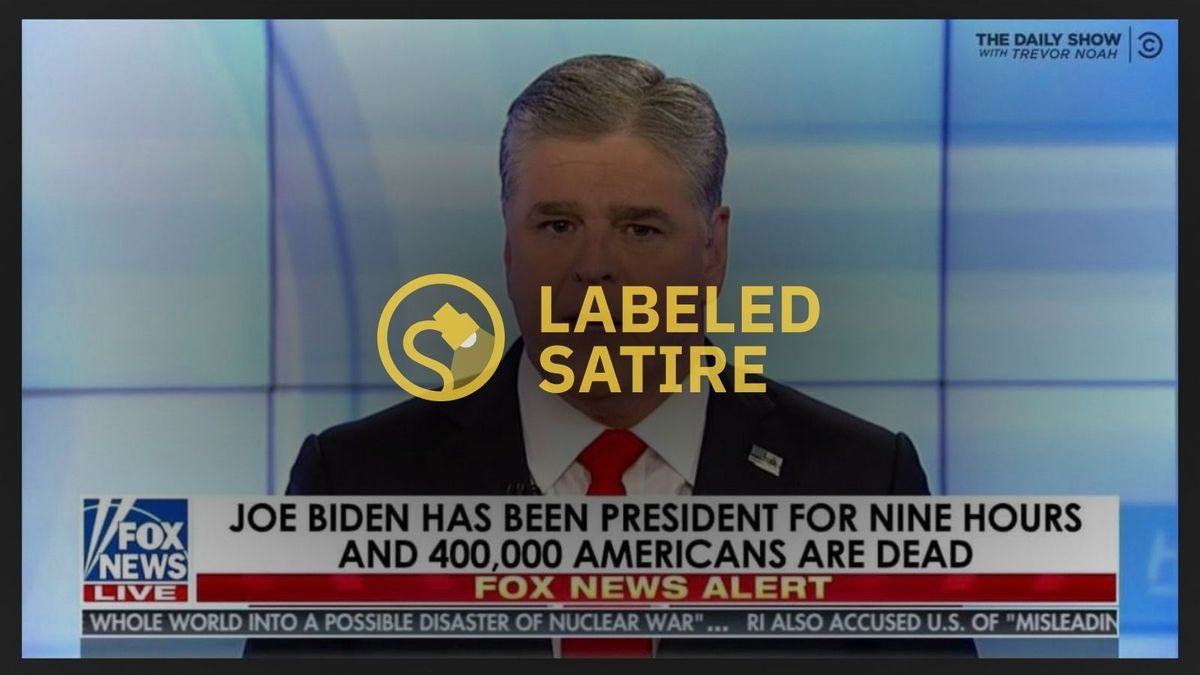 Claim:
A Fox News chyron reported "Joe Biden has been president for nine hours and 400,000 people are dead."
Rating:

In late January 2021, readers emailed Snopes asking about an image being shared on social media that was mocked up to look like it showed a Fox News chyron superimposed over prime time host Sean Hannity that read, "JOE BIDEN HAS BEEN PRESIDENT FOR NINE HOURS AND 400,000 AMERICANS ARE DEAD." This was not a real Fox News chyron — if one looks at the top right corner of the image, the logo for the comedy program "The Daily Show with Trevor Noah" is visible, meaning the image was created by comedy writers for the Comedy Central parody news show to poke fun at the way Hannity, a vocal supporter of former U.S. President Donald Trump, would be expected to cover Trump's Democratic successor, U.S. President Joe Biden.

Trump has been widely criticized for his administration's handling of the COVID-19 pandemic. The Trump administration oversaw 400,000 U.S. fatalities from the disease, with over 100,000 occurring during Trump's final 36 days in office, when he was accused of abdicating his official duties as he embarked on a quest to overturn the November 2020 election results.

Even though the altered image was a joke, "The Daily Show" writers weren't that far off the mark from reality. On the day of Biden's inauguration, Hannity complained on his radio show that Biden was "minimizing" the pandemic, stating:

They're minimizing, I noticed, on getting COVID under control. “It's going to take a lot of time, a lot of time. Our team is eager." I thought he was going to do this on day one. “We're eager though to get the agencies and into the White House to gain a better assessment about where things really stand on managing the pandemic." Trump left you multiple vaccines. You're in much better shape.

In fact, one of the scandals of the administration's waning days happened when state governors and health officials said they were lied to by Trump officials about vaccine-supply reserves that didn't exist.