Does 'Forrest Gump' Plot Include These Inconsistencies?

We carefully reviewed scenes of the 1994 film for holes in its storyline. 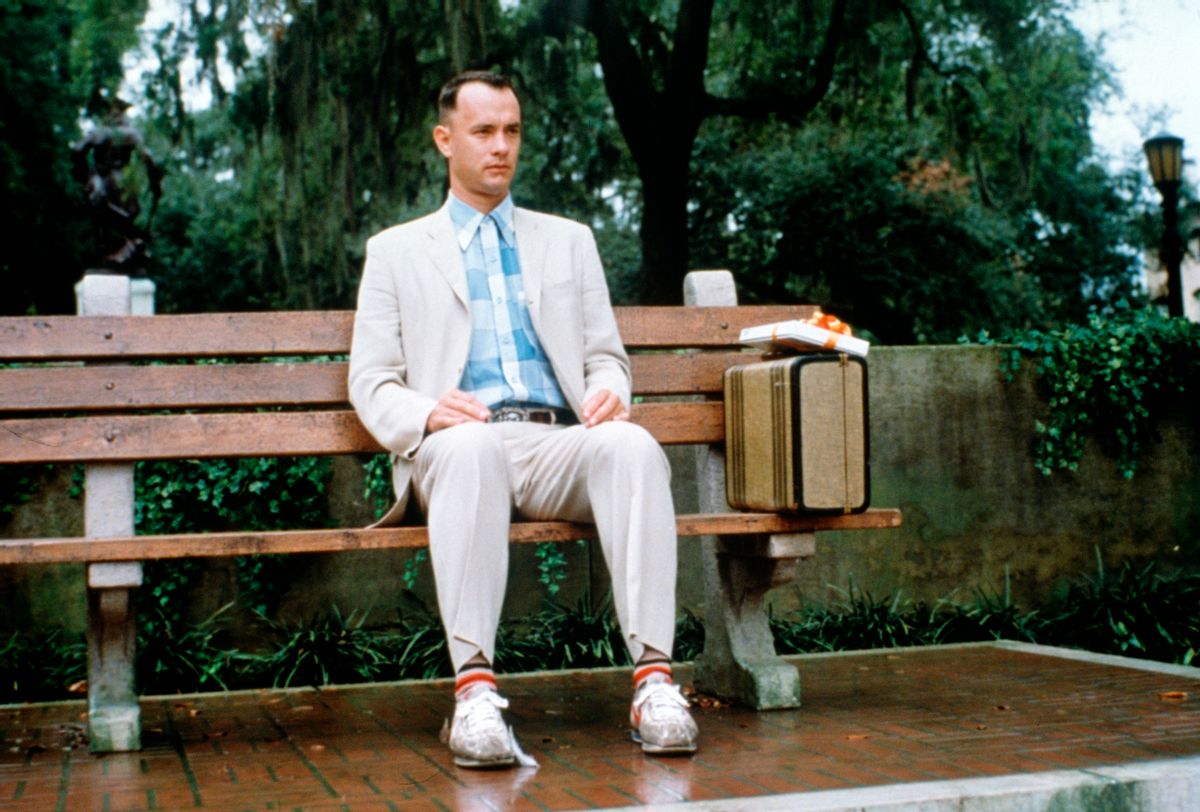 In early 2021, Snopes became aware of online posts alleging narrative plot holes in the 1994 film "Forrest Gump," which American screenwriter Eric Roth created based on a novel with the same title.

One Reddit thread, for example, debated the accuracy of a scene in the latter half of the movie in which the fictional protagonist, Forrest Gump, played by Tom Hanks, received a letter from the computer software company, Apple.

Additionally, a webpage on My Daily Magazine — a digital hub of self-improvement tips and other content — alleged Gump's famous cross-country run (which came after the Apple letter scene) spanned 1.5 years, based on other context clues, though Gump said he ran for more than three years.

Below, we analyzed the legitimacy of those claims, which together asserted that the movie that mixed fictional characters and ideas with real events contained at least two plot holes.

Before we proceed, let us note here: We requested an interview with Roth by reaching out to the Los Angeles-based talent company, called Creative Artists Agency, which represents the screenwriter, according to IMDB. We have yet to receive a response, and we will update this report when or if we receive one.

Did Gump Receive Letter From Apple Before It Existed?

"Iconic 'Forrest Gump' Scene Has One Ridiculous Flaw No One Noticed | Forest Gump is set in 1975 and he got a letter from Apple, which wasn't founded until 1981."

In other words, the post claimed Gump received a letter from the tech company before it was established.

The Reddit post referenced a montage scene roughly one hour and 40 minutes into the movie, when Gump explained his life after working with "Lt. Dan" as a member of his platoon and later as shrimp boat partners. Gump narrates the scene:

Now, because I had been a football star, and a war hero, and a national celebrity, and a shrimpin' boat captain, and a college graduate, the city of fathers of Greenbow, Alabama, decided to get together and offered me a fine job.
So, I never went back to work for Lt. Dan. Though he did take care of my Bubba-Gump money. He got me invested in some kind of fruit company. And so then I got a call from him saying we don't have to worry about money no more and I said, "That's good. One less thing."

As Gump mentions the "fruit company," movie viewers saw him opening a letter addressed to him with Apple's retro rainbow logo and the title "Apple Computer, Inc." We took the below-displayed screenshot of the moment, via Amazon's digital rental version of the film:

While the Reddit post claimed the computer manufacturing company was actually formed in 1981 — which we learned was inaccurate based on evidence we outlined below — we pieced together events showing when, exactly, college dropouts Steve Jobs and Steve Wozniak created the company.

As a 26-year-old engineering intern at Hewlett-Packard Company, or HP, Wozniak indeed developed a plan to build his own computer in 1975, after a New-Mexico-based tech firm announced the invention of the first-ever commercially successful microcomputer, the Altair 8800, the previous year, according to Encyclopedia Britannica and the Smithsonian National Museum of American History.

Wozniak initially pitched his design to his employer, historical records show. But after it expressed no interest in his idea, he teamed up with his former high-school classmate, 21-year-old Jobs, to act on his vision by piecing together equipment in Jobs' Silicon Valley garage. So while Wozniak first acted on a design that eventually led to the company's creation in 1975, Apple Computers, Inc, was not officially established until April 1, 1976, according to an arm of The Library of Congress that documents American business and economics, called Business Reference Services.

The underlying assertion of the Reddit post's claim was accurate: Jobs and Wozniak founded Apple after the date of Gump's letter.

Additionally, Apple did not launch an initial public offering (IPO) of its stock — which would have hypothetically allowed Lt. Dan to invest his and Gump's money in the tech company— until December 12, 1980, according to EDN, a trade magazine for electrical design and engineering news.

"The shares sold out almost immediately and the IPO generated more capital than any IPO since Ford Motor Company in 1956," the magazine reported. "Instantly, about 300 millionaires were created, some 40 of which were Apple employees and investors."

In sum, since the letter supposedly depicting Gump's stock investment in Apple was dated in fall 1975, and the fact that Jobs and Wozniak did not officially launch the company until the following spring and allowed public shareholding years after that, it was true to say the movie scene included a narrative plot hole.

The original "Forrest Gump" novel by Vietnam veteran Winston Groom, which was published about eight years before the movie's release, did not reference Apple or "some kind of fruit company" in its storyline, based on our keyword search of the text.

In an October 2020 slideshow of "Interesting Facts About Forrest Gump," My Daily Magazine alleged of a roughly seven-minute sequence in the movie, depicting the long run by Gump:

Forrest Gump said that he was running for three years and two months. But he actually started running the day President Carter collapsed from heat in October 1, 1979, and ran until he got Jenny's letter the day President Regan's [sic] assassination attempt was all over the news. Between the first and the second event, only a year and a half had passed.

Put another way, the webpage claimed Gump only ran for 1.5 years — not three years and about two and a half months, like Gump claimed in his narration of the scene — based on surrounding details of the film that depicted real historical events. (Note: Winston's novel did not include the famous cross-country run by Gump.)

However, the movie's famous "run scene" began on Gump's front porch in the fictional town of Greenbow, Alabama. The character said "for no particular reason, I decided to go for a little run."

Within seconds, viewers saw Gump running past a business in which at least two men were watching a television news cast. The news program said in the background of Gump's narration: "President Carter, suffering from heat exhaustion, fell into the arms of ..."

President Jimmy Carter indeed suffered from heat exhaustion while running a six-mile race in Maryland on Sept. 15, 1979, according to news archives obtained by Snopes. "The President was sweating excessively and had become weak and wobbly at the 4-mile point due to heat exhaustion," The New York Times reported two days later. "Carter fell to his knees and was given smelling salts."

While it was unclear whether the news anchor in in Forrest Gump was reporting on Carter's fall live or recapping the event days after it happened, the inclusion of the detail likely meant movie producers wanted viewers to believe Gump began his run in mid-September 1979.

After passing the business, Gump's narration continued as images of him running past Alabama's state line to Mississippi, and eventually reaching the Pacific Ocean in Santa Monica, California, appeared on screen. He supposedly made the same multi-state trip multiple times, only stopping to sleep, eat, and use the bathroom.

Then, at one point, movie viewers saw men inside a barbershop and people inside a cafe, including Gump's love interest Jenny Curran, watching TV news programs featuring Gump's run.

One news anchor said he had been running for more than two years, which would put the date in mid-September 1981 or later, based on Carter's heat exhaustion episode.

By the end of the montage, when he apparently stopped running and returned to Alabama, Gump claimed, "I had run for three years, two months, 14 days and 16 hours."

The movie's next scene showed a news program playing footage of President Ronald Reagan approaching a limousine and people ducking from gunshots. "Five or six gunshots were fired by an unknown, would-be assassin," a news anchor said, as Gump listened to the broadcast. "The president was shot in the chest."

That detail again referenced a real-life event, the attempted assassination of Reagan in Washington, D.C., on March 30, 1981, according to news archives. The president was leaving a hotel speaking event when gunman John Hinkley Jr. opened fire, wounding Reagan and three administration officials.

Based on back-of-the-napkin math, only one year, six months and 15 days passed between Carter's collapse and Reagan's assassination attempt, proving the underlying claim of The Daily Magazine webpage true — Gump's alleged timeframe for the run did not align with the actual timing of simultaneously-referenced historical events.

According to ScreenCraft, an organization that aims to help aspiring screenwriters, cinematic storytellers should avoid such plot errors, big or small, that expose inconsistencies in characters' motivation or storylines.

"Even the best screenwriters make mistakes," wrote Ken Miyamoto, a ScreenCraft blogger and former Sony Pictures screenwriter. "The small ones are those that may slip by the average audience member."