Should You Apply Vicks VapoRub to Children's Feet?

No substantive evidence documents that the application of Vicks VapoRub to the soles of childrens' feet effectively counters nighttime coughs. 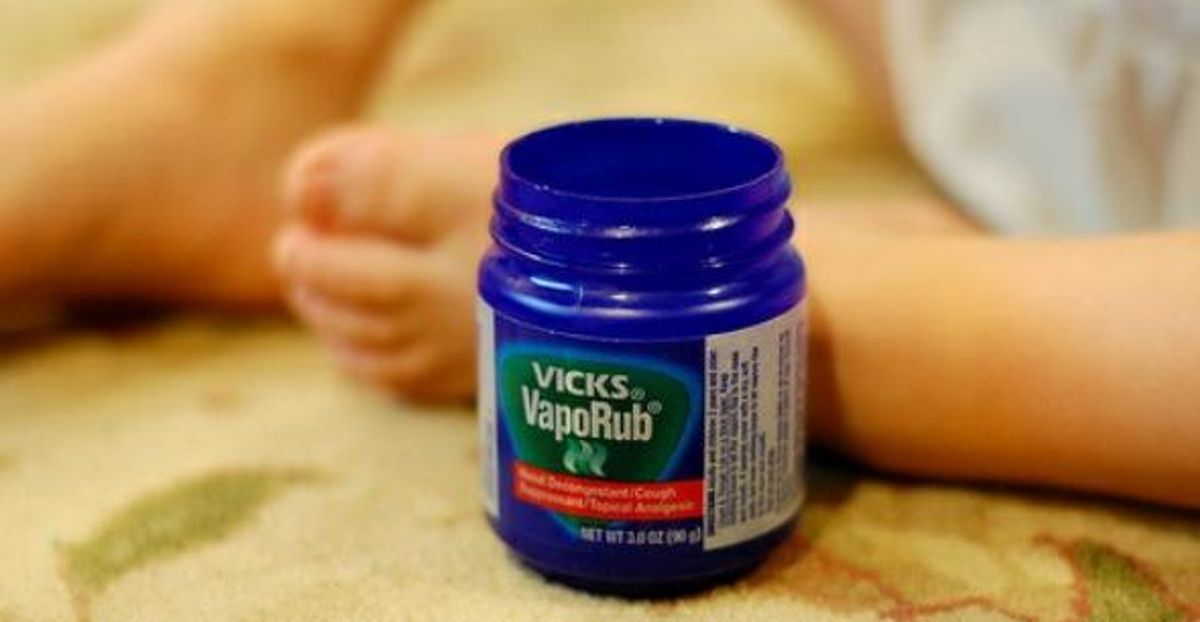 This advisory that applying Vicks Vaporub (a brand of mentholated topical cream) to the bottom of one's feet at bedtime, then covering those feet with socks, will stop persistent nighttime coughs hit the online world big in At that time, the National Research Council of Canada (NRC), the agency touted in the advisory as having "discovered" this cure, sent us a statement denying it extolled the application of Vicks VapoRub to a child's feet as an effective counter to nighttime cough:

The National Research Council of Canada (also referred to as NRC) has recently learned of an email that is circulating which claims we have proven that Vicks VapoRub can be applied to the feet to cure a persistent cough. We would like to take this opportunity to dispel this suggestion.

The e-mail suggests that NRC has conducted research comparing the effectiveness of prescription cough medicines in children to alternative therapies like acupressure. However, our databases indicate that no such studies involving Vicks VapoRub have been conducted at NRC. It is rare for NRC to engage in research into alternate applications of medications.

Home remedies, homeopathy and alternative therapies for illnesses are popular areas of interest for Canadians, especially in recent years. Although NRC conducts some research in these areas (NRC conducts research on nutraceuticals and therapeutic attributes of plants), our focus is more frequently on medical and pharmaceutical treatments for illness and disease. Some of our best-known advancements have been in this field, including: the first practical motorized wheelchair, the first artificial pacemaker, the vaccine, the cobalt bomb and research into food-borne pathogens and water safety, to name a few.

However, while the NRC has neither researched the claim slathering VapoRub on a child's feet will alleviate nighttime cough nor endorses the practice, that particular home cure had been proffered by many people in the health industry prior to the (That by the way, refers to that body as the "Canada Research Council," but its proper name is the "National Research Council Canada.")

Joe and Teresa Graedon of "The People's Pharmacy," a health advice feature run as both a syndicated newspaper column and a weekly show on National Public Radio, included mention of this potential use of the salve in their 2002 "Guide to Unique Uses for Vicks." Expanding on the 2002 suggestion "Easing chest congestion is standard, of course, but have you considered applying it to the soles of the feet for a persistent nighttime cough?" in February 2007, they wrote: "We also suggest putting Vicks VapoRub on the soles of the feet for a nighttime cough. Put on socks to protect the sheets."

Vicks' usage instructions state nothing about slathering its VapoRub product on one's feet; instead, they instruct those looking for temporary relief of cough due to common cold to rub a thick layer of the salve onto their chests and throats. And contrary to the instructions outlined in the advisory, some health agencies have warned camphor-containing products should not be used on children and should be used only in accordance with the directions on their labels:

The [New York City] Health Department warned New York City parents and caregivers to keep products containing camphor away from children. Some camphor products can be toxic to children when accidentally ingested or excessively applied to skin. Three recent cases of seizures associated with camphor have been confirmed in the Bronx. All three children have recovered. The Health Department is investigating seven additional cases suspected to be associated with camphor.

Camphor, alcanfor in Spanish, is a common ingredient in many products used for colds, pest control, to ward off illness, or as air freshener. Camphor is sold in cubes, or as a balm or ointment. Camphor cubes and tablets are not approved by the FDA for use as cough or cold medicine. Camphor products that are not labeled with ingredients and do not have manufacturer information should not be used; they are unsafe and illegal. Legal camphor products, such as some chest rubs used to relieve congestion, should only be used as directed on the label.

(Vicks' VapoRub product has about a 5.26% camphor content; the unapproved camphor cubes and tablets referenced above may contain higher concentrations of camphor.)

Vicks has addressed another VapoRub rumor that postulates using the product to combat toenail and fingernail fungus (an alternate use of the product that has been ballyhooed by a number of folks for years, including author Gott, whose syndicated health column at one time appeared in more than An automated response at the phone number for VapoRub consumers advised: "We do not recommend using VapoRub for the treatment of toenail fungus. Consult your doctor or pharmacist on the best treatment to meet your needs. Thanks for calling."