Should You Avoid Getting a Flu Shot? 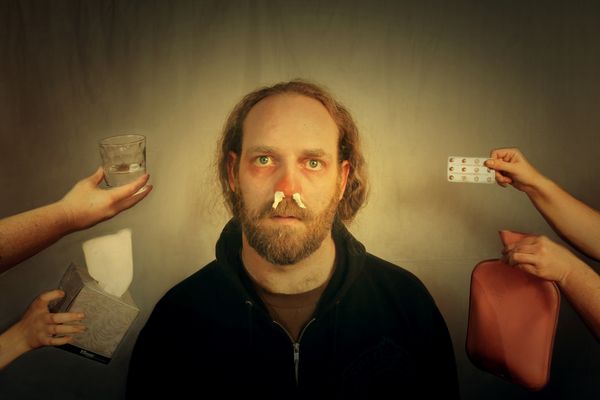 Man with flue with hands coming in from each side offering thing that might help. (Image Via Scott MacBride/Getty Images)

Claim:
The flu shot is dangerous and full of risks the pharmaceutical companies don't want you to know about.
Rating:

Every flu season sees an increase in viral web stories making largely unsubstantiated allegations about the health risks of the flu shot that include claims about their scary-sounding ingredients, connections to a variety of diseases (including Alzheimer's), and their supposed lack of efficacy in general:

The pharmaceutical industry, medical experts and the mainstream media are candid in telling us that flu vaccines contain strains of the flu virus. What they are less likely to reveal though is the long list of other ingredients that come with the vaccine. It is now a known fact that flu vaccines contain mercury, a heavy metal known to be hazardous for human health. Mercury toxicity can cause depression, memory loss, cardiovascular diseases, respiratory problems, ADD, oral health problems, digestive imbalances and other serious health issues.

The article quoted above, which is representative of the text and claims that appear nearly identically in hundreds of Facebook posts, makes a number of claims that need to be investigated on their own merits:

Claim: The flu shot makes you sick to begin with.

Flu shots work by introducing dead (inactivated) strains of influenza virus, which trigger your immune system to create antibodies to fight those strains. These antibodies make your body more prepared to fight if should it be exposed to an active strain in the future. Because the strains are inactive, any sickness you develop after the shot is not caused by influenza, according to the Harvard Medical School:

The vaccine is made from an inactivated virus that can't transmit infection. So people who get sick after receiving a flu vaccination were going to get sick anyway. It takes a week or two to get protection from the vaccine. But people assume that because they got sick after getting the vaccine, the shot caused their illness.

It is, of course, possible that feelings of sickness come from some of the side effects of the injection, but the vaccine itself is not infecting you in any way.

Claim: Flu vaccines contain other dangerous ingredients such as mercury.

Flu shots administered from multi-use vials may contain a preservative called thimerosal, which breaks down into ethylmercury in the body. Mercury is an element and as such it can be found in many different chemical forms. But when people are concerned about mercury toxicity, they are concerned about methylmercury, which is indeed toxic at high levels and could cause some of the problems listed above.

Ethylmercury, on the other hand, passes through your body quickly, and numerous studies have found it safe for use in vaccines (though there is some evidence that its use could be problematic for infants — a population that CDC does not recommend for flu shots anyway). Saying ethylmercury is dangerous because is contains mercury is like saying that your table salt is at risk of spontaneous combustion because it contains sodium. Claim: The flu shot can give you Alzheimer's disease.

The “leading immunogeneticist” Dr. Hugh Fudenberg, whom the article cites as the authority on this claim, had his medical license revoked in 1995 for ethical misconduct and was an outspoken proponent of the widely discredited MMR-autism link. His claim of the link between Alzheimer's and vaccines, though hard to trace, may or may not come from a talk he gave at the 1997 NVIC International Vaccine Conference. The statement has not been backed up by any published peer-reviewed research since then. In fact, a 2001 study found that adults exposed to vaccines were at a lower risk of Alzheimer’s.

Pharmaceutical companies (sometimes) profit from vaccines, but the fact that a company makes a profit is an appeal to emotion and is not evidence to support the claim of a faulty product or of nefarious intent.

It also may not be accurate. A recent Atlantic article covered this question extensively, stating:

Not only do pediatricians and doctors often lose money on vaccine administration, it wasn't too long ago that the vaccine industry was struggling with slim profit margins and shortages. The Economist wrote that "for decades vaccines were a neglected corner of the drugs business, with old technology, little investment and abysmal profit margins. Many firms sold their vaccine divisions to concentrate on more profitable drugs."

The suggestion of massive profits from flu shots ignores the fact that profits margins are generally much higher for other drugs than for flu vaccines, as well. The same Atlantic article cites one estimate that puts the vaccine market at around $24 billion. This sounds like a large number, but it would, in fact, account for only two to three percent of the pharmaceutical market worldwide.

Claim: There is a lack of real evidence that young children even benefit from
flu shots.

Many anti-vaccine articles parrot the claim that "51 studies involving 260,000 children showed no benefit compared to a placebo for children under the age of two". This stems from a 2008 meta-analysis that did indeed conclude that there is less efficacy for children under the age of two, something the CDC already recognizes on their website. However, of the 51 studies analyzed and the 260,000 observations those studies included, only one study (at the time) was performed on children below the age of two using inactive strains (the kind found in flu shots). A later study in 2011 that reviewed over 5,000 research articles concluded that flu shots “consistently show highest efficacy in young children (aged 6 months to 7 years),” categorically rejecting the claim that there is a lack of “real evidence” that “young children” benefit from the shot.

Claim: The flu shot makes you more susceptible to pneumonia and other contagious diseases.

People with compromised immune systems are at higher risk of complications from vaccines when those vaccines contain live strains (which, again, the flu shot does not), and some skin reactions are possible immediately following an injection.

However, the notion that the flu shot “weakens the immune system” is false. According to a review paper in the journal Pediatrics:

Vaccines may cause temporary suppression of delayed-type hypersensitivity skin reactions or alter certain lymphocyte function tests in vitro. However, the short-lived immunosuppression caused by certain vaccines does not result in an increased risk of infections with other pathogens soon after vaccination.

While the term “vascular disorder” is fear-inducing, it merely describes anything having to do with veins and arteries. The flu shot does not, de facto, cause any of these problems, but all the complications listed above are listed by the CDC as possible side effects. It is worth noting, however, that the flu will almost certainly give you some or all of these symptoms—and with a much greater intensity than the symptoms resulting from a flu shot.

Claim: Children under the age of 1 are at risk of a “neurotoxic breach” of the blood-brain barrier. There is a well-documented, though statistically minor, connection between a specific H1N1 flu vaccine (Pandemrix) and narcolepsy. But such reports concerned only that one vaccine, which was produced for a specific flu strain, and have limited relevance to the seasonal flu shot. Pandemrix is available in Europe but not the United States or Canada.

This claim, from a scientific standpoint, is a repeat of the earlier false claim (above) that suggests your body is more susceptible to infection or disease after a flu shot. “Harmful immunological responses” is a broad and unhelpful term that, while it may have aided in turning up “literally thousands” of responses in an academic search, is not really all that surprising as the term would includes the already documented risk of a skin and allergic reactions that come with pretty much any injection.

Claim: The flu shot can cause serious neurological disorders.

The neurological disorder specifically associated with flu vaccines is the Guillain-Barré Syndrome—a terrifying disease that causes nerve damage and sometimes paralysis. A widely cited study on a population of individuals who received the H1N1 vaccine in 1976 showed an increased risk of contracting this disease — whose cause is unknown — compared to those who did not receive the vaccine:

The Institute of Medicine (IOM) conducted a scientific review of this issue in 2003 and found that people who received the 1976 swine influenza vaccine had an increased risk for developing GBS. The increased risk was approximately one additional case of GBS for every 100,000 people who got the swine flu vaccine. Scientists have several theories about the cause, but the exact reason for this link remains unknown.

The link between GBS and flu vaccination in other years is unclear, and if there is any risk for GBS after seasonal flu vaccines it is very small, about one in a million. Studies suggest that it is more likely that a person will get GBS after getting the flu than after vaccination. It is important to keep in mind that severe illness and death are associated with flu, and getting vaccinated is the best way to prevent flu infection and its complications.

This topic has been heavily researched for decades, and no specific consensus regarding the link or mechanism behind the flu virus and the disease has been established. What has been established, however, is how small the risk is relative to the risks of contracting complications from flu itself. A 2013 study in The Lancet stated that:

Current iterations of the seasonal flu shot do not have any live strains in them (though the nasal spray includes weakened strains), nor do they have any mercury (in the United States), detergent, antifreeze, or aluminum. They contain, at most, 50 times less formaldehyde than a pear.

We, of course, are not healthcare providers and cannot make any medical decisions for you. The purpose of this post is to correct misinformation on the Internet, and there are few topics that lend themselves to as much misinformation as vaccines. All healthcare decisions, however, should be made between you and your doctor.

Volodin, N.N. et al.   “Status of the Blood-brain Barrier in Newborn Infants of Various Gestational Ages in the Normal State and in Pathology."     Pediatriia.   1989.