The 1992 storm marks one of the most devastating natural disasters in U.S. history. 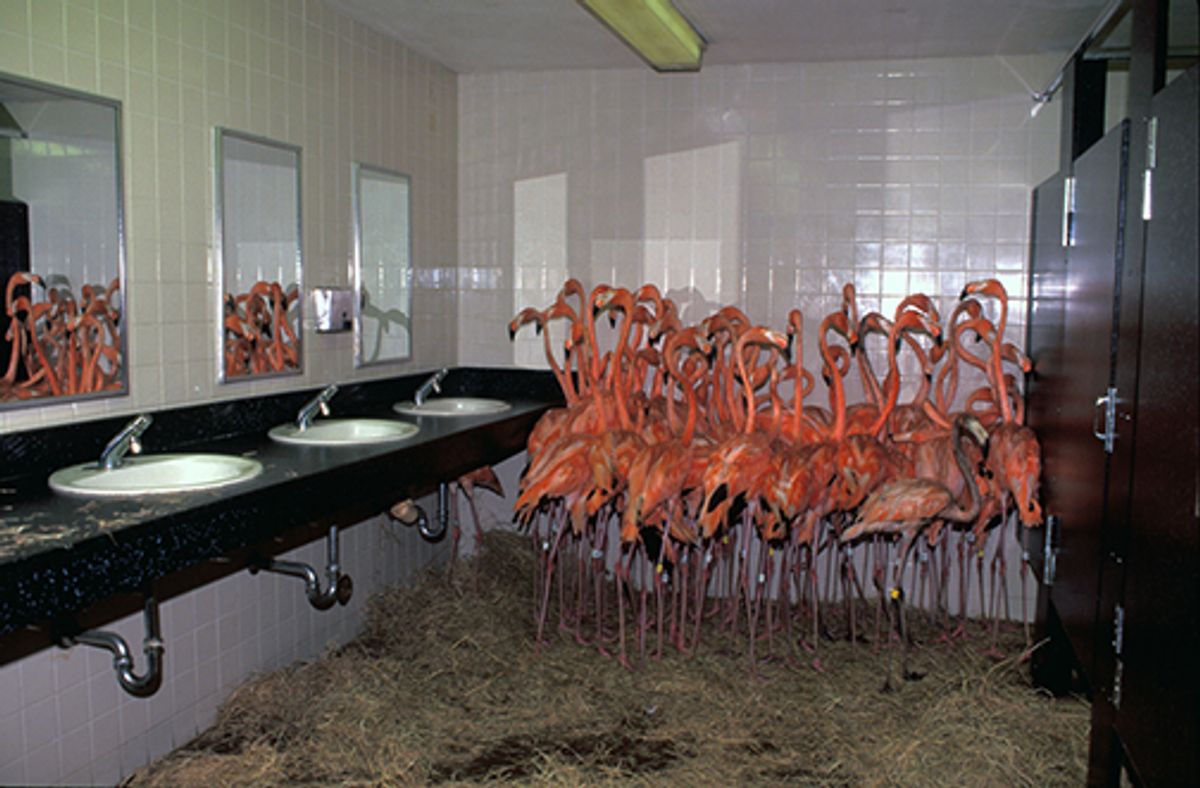 Claim:
During Hurricane Andrew in 1992, animal caretakers at Zoo Miami (then Miami Metrozoo) sheltered dozens of flamingos in a bathroom.
Rating:

For more than three decades, a photograph showing dozens of flamingos huddled in a zoo bathroom has become an iconic representation of Hurricane Andrew, one of the most destructive natural disasters in U.S. history.

The photograph, which has been shared on social media in various forms throughout the years, is also totally authentic.

With a Category 5 ranking, Hurricane Andrew was a powerful and destructive storm that struck the Bahamas, Florida, and Louisiana in August 1992. At the time, the National Weather Service estimated the storm had caused $26.5 billion in damages, making it the most expensive natural disaster in U.S. history. Total damages would later be surpassed by Hurricane Katrina in 2005 at $81 billion.

Snopes spoke with Ron Magill, Zoo Miami goodwill ambassador and communications director, who confirmed the authenticity of the picture — he took it on Aug. 23, 1992. Magill said he believed there were a total of 38 flamingos in the Zoo Miami (then Miami Metrozoo) flock at the time, and they would have all been put in the restroom together.

“This was part of a hurricane protocol that required us to round up all of the flamingos in the front lake of the zoo and place them in the ladies public restroom, which was used as a bunker, whenever a hurricane warning was issued,” said Magill.

“After catching the flamingos and putting the last ones into the bathroom for the evening, I was struck by how strange it looked to see the birds huddled together in the ladies bathroom so I took out a point-and-shoot camera and took a couple of frames. Little did I know at the time how destructive and historic that storm would be or how much exposure that image would get afterwards!”

Magill recounted the experience in a 2017 video published to YouTube by the electric company, Florida Power & Light. In the video, he noted that the last thing zookeepers do during a hurricane warning is move the flamingos from the lake because it is a “stressful procedure.” The image became a two-page spread in Newsweek and went on to become an iconic image from the hurricane.

Atlas Obscura described the bathroom as the “obvious choice” to hold the flamingos, noting that the restroom had “no windows, a tile floor for easy cleanup, and plenty of room for an improvised bed, made out of hay hastily dumped all over the floor.” A “ready-made supply of fresh water” also solidified the decision.

The photograph has been in circulation both in print and on the internet in the decades since it was originally captured, with varying information that has been confused over the years. It first went viral in 2017 ahead of Hurricane Irma, when Reuters reported that the zoo was actively preparing for the soon-to-be catastrophic Hurricane Andrew. ABC News Australia republished the picture ahead of Hurricane Irma in 2017 with a caption that incorrectly stated that “more than 50 flamingos were herded into the bathroom during Hurricane Georges in 1998.” Business Insider also incorrectly stated that the photograph was taken in 1998 when “Hurricane Georges forced them to hide out in the men’s room.” That same year, Magill told The Miami New Times that after Hurricane Andrew, the zoo added a concrete holding block to the flamingo exhibit that now holds the pink birds during intense storm systems.

As NPR reported, the Association of Zoos and Aquariums, which represents more than 230 animal care facilities in the across the world, requires members to practice an annual disaster preparedness drill to keep their accreditation. In the U.S., the Zoo and Aquarium All Hazards Partnership assists facilities to prepare for hazards, including hurricane threats.

useofspace. “The Miami Zoo Put 30 Flamingos in the Bathroom during Hurricane Andrew, in 1992, to Ride out the Storm.” R/Interestingasfuck, 10 Mar. 2019, www.reddit.com/r/interestingasfuck/comments/azc5jk/the_miami_zoo_put_30_flamingos_in_the_bathroom/.