Did a Woman Get Fired After Donating a Kidney on Her Boss' Behalf?

A lawsuit over the incident, which continues to provoke outrage on the internet to this day, was settled in 2014. 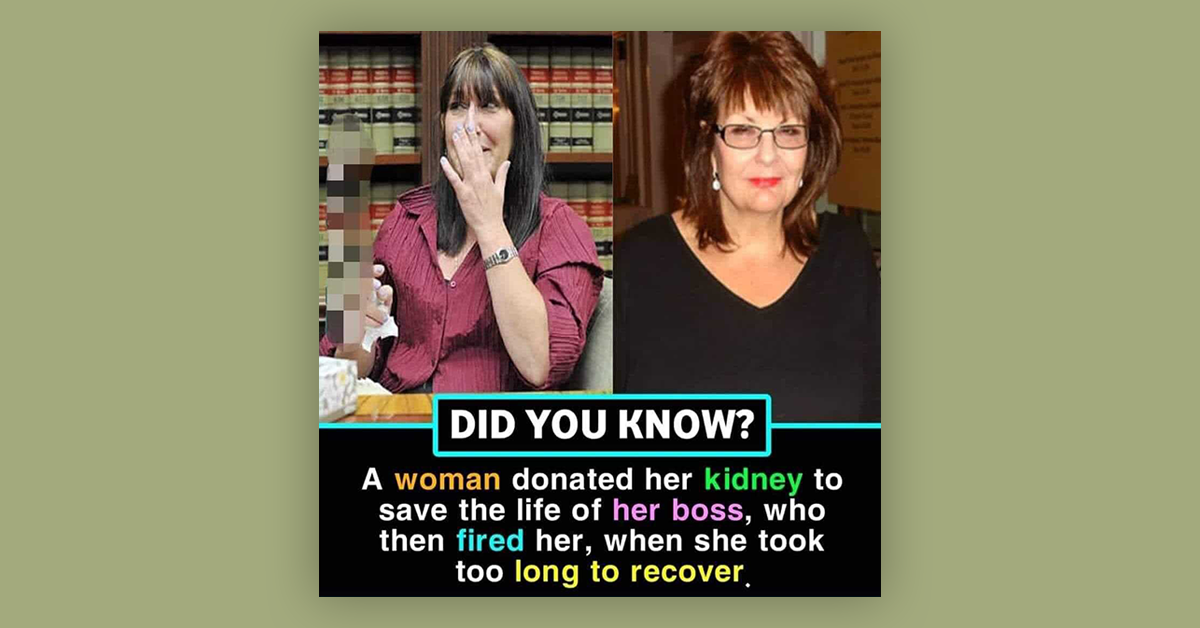 Claim:
A woman donated her kidney to save the life of her boss and was later fired during her recovery.
Rating:

A woman donated her kidney to the National Kidney Registry as part of a "paired kidney exchange" that allowed her boss to be paired with a kidney donor. The exchange occurred in August 2011. The woman was fired in April 2012.

Because this case was settled confidentially, the claim that the woman was fired for reasons related to her recovery was never established by a judge or jury. The defendants in the case did not publicly concede that point.

A series of 2012-era news stories regarding a woman named Debbie Stevens, who agreed to donate her kidney to help her boss get a lifesaving transplant, is frequently reshared online. The underlying story, additionally, has become discussed enough to be presented in meme form years later: According to the complaint filed by her attorney, Stevens offered to donate her kidney to Brucia in October 2010 after hearing she was searching for a donor. Brucia allegedly responded "you never know, I may have to take you up on that offer one day.” Stevens had previously worked for Atlantic Autogroup before temporarily relocating, and she was rehired shortly after this conversation. Indeed, in January 2011 Brucia apparently asked Stevens about taking her up on the kidney offer. She was, however, not a good match. Instead, according to the complaint, "she agreed to donate it to a stranger in St. Louis, Missouri, setting up a transplant chain that enabled Brucia to receive a better-matched kidney from a donor in San Francisco." Her surgery was on Aug. 10, 2011, and it resulted in a simultaneous donation of a kidney to her boss, Brucia.

According to Stevens' lawyer, the removal of her kidney resulted in complications including abdominal pain and digestive problems requiring frequent bathroom breaks and an inability to comfortably lift heavy objects. When she returned to work in September (under pressure from Brucia, she alleged) she was treated curtly by Brucia, who allegedly refused to provide accommodations for these and other medical issues. Brucia is alleged to have ignored, for example, a doctor's order that she not lift heavy objects, and she required Stevens to get permission before using the restroom.

Allegedly in response to complaints Stevens made regarding harassment from Brucia, the company's management transferred her to another dealership, where she was, her lawyer argued, similarly denied accommodations and put in a position for which she was less qualified. Atlantic Automotive Group fired Stevens for "performance issues" just a few weeks after her lawyer sent a complaint to the company in March 2012. Following several depositions and rounds of discovery, both parties agreed to settle on Sept. 30, 2014.

As a result, claims that Stevens was fired because of her recovery time or because of needs that arose from her kidney donation have not been admitted by her bosses or Atlantic Automotive Group, or adjudicated by a jury or a judge. Atlantic Automotive has only publicly admitted that Stevens worked for the business, and that she "became involved in a 'paired kidney exchange' for defendant Brucia."

However, when Stevens brought the case to the New York State Division of Human Rights, that body issued a "determination of probable cause" that a federal American Disabilities Act (ADA) violation occurred. To sue a private company under the ADA, an individual needs a "right to sue" letter issued by the U.S. Equal Employment Opportunity Commission. After a parallel investigation by that body, Stevens received approval to sue under the ADA, leading to the lawsuit described in this fact check.

Because the underlying story about a woman getting fired after donating a kidney on her boss' behalf is factual, and because she was later fired for problems she alleges were related to the kidney transplant surgeries but the cause of her termination was never adjudicated, we rank the claim as "Mostly True."