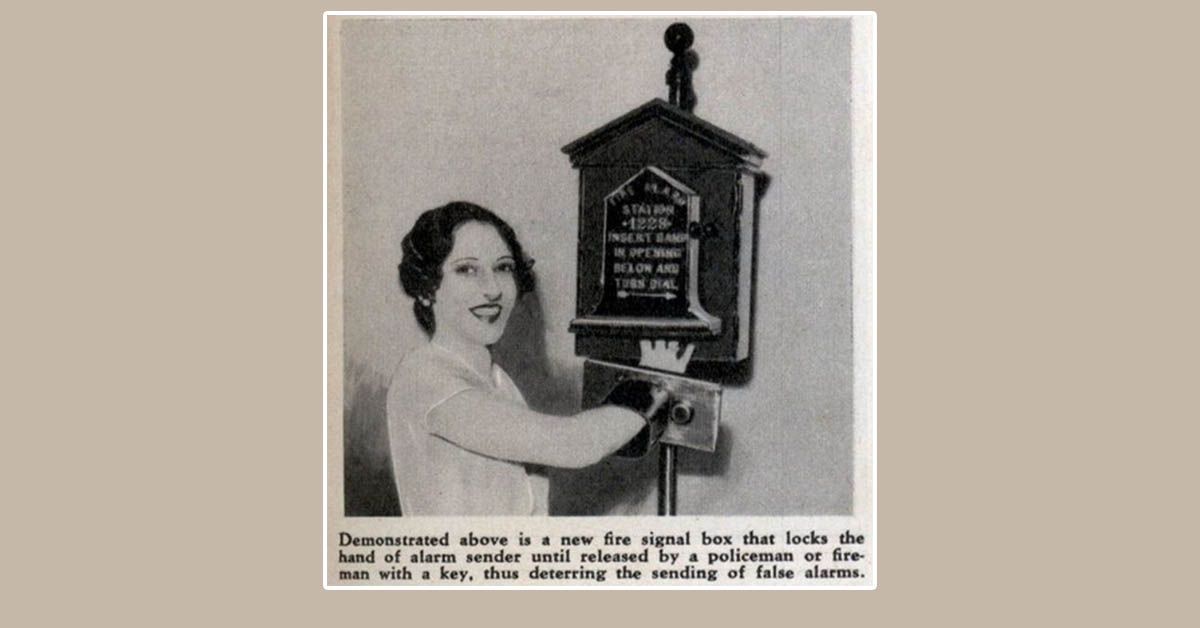 Claim:
An old photograph shows a fire alarm box equipped with an anti-prank mechanism that locks the alarm sender in place until authorities arrive.
Rating:

A photograph shows an anti-prank mechanism on a fire alarm box in the 1930s.

The anti-prank mechanism did lock to a person's wrist like a chunky bracelet when the alarm was pulled, but then the mechanism would detach from the alarm.

In November 2019, a picture supposedly showing a woman demonstrating a "new" anti-prank measure on an old "fire signal box" was shared to the Facepalm section of Reddit (a category dedicated to obvious and embarrassing blunders) under the title "In event of a fire, we need a sacrifice": The title of this Reddit post, as well as the caption provided below this image — "Demonstrated above is a new fire signal box that locks the hand of alarm sender until released by a policemen or fireman with a key, thus deterring the sending of false alarms" — led many viewers to believe that this anti-prank mechanism worked by locking the alarm puller to the fire alarm itself. While this method would certainly make it easier for police to identify the pranksters, users were quick to point out that it would also "sacrifice" anyone who pulled the fire alarm in earnest during a real fire.

Thankfully, this device didn't actually lock the alarm puller to the fire alarm. Rather, this piece would detach from the alarm and lock to the person's wrist, kind of like a big, chunky bracelet, allowing authorities to identify who pulled the alarm after the ordeal was over.

The above-displayed image was originally published in a 1938 issue of Modern Mechanix. This false-alarm prevention mechanism was also featured in a 1977 documentary called "Gizmo!" In the following video from the documentary, you can see how this anti-prank mechanism locks to a person's arm but detaches from the pole:

The proliferation of fire alarms in the early 1900s provided communities with an easier way to alert authorities in the case of an emergency. However, these devices also led to the rise of a new problem: pranksters and false alarms.

A 1939 report published in Kentucky's The Owensboro Messenger stated that nearly 20% of local fire department runs originated with false alarms. The Morning Post of Camden, New Jersey, reported that there were 51 false alarms in 1934 and 76 more in 1936. That article recounted one unique fire-alarm prank involving a group of boys, a long string, and an innocent bystander: 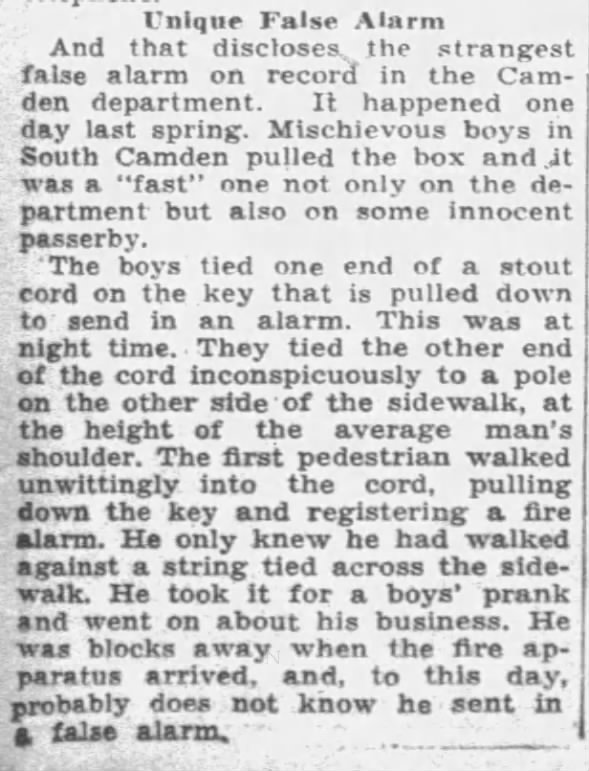 While the above-displayed newspaper clip relays a humorous anecdote, these false alarms didn't always end on an innocent note. In 1935, four firefighters were injured during a crash while responding to a false alarm. In 1930, the Associated Press reported that a firefighter in Chicago was severely (possibly gravely) injured due to a false alarm: The "wrist lock" deterrent wasn't the first or only method fire departments deployed to prevent false alarms. In 1929, Popular Mechanics reported that "experiments (were) being conducted in New York with a fire-alarm box-equipped with a camera to detect the false-alarm joker and performers of other pranks that often lead to accidents and injuries to firemen." Firefighters in Oregon tried attaching a sign to these alarms that warned people "A False Alarm May Cost a Life!" Another attempt involved an "ear-shattering" siren officials hoped would deter anyone from unnecessarily pulling the alarm. And firefighters in New Jersey added a special powder on the handles of fire alarms to help them identify any pranksters.

Despite these efforts, false fire alarms persisted. In 1943, a fire chief in Kentucky said that the public might need an educational course on how to use fire alarms after a person mistook a fire alarm box for a mailbox and accidentally set off a false alarm: